Nick Grimshaw interview: “I think there’s still masses of homophobia and difficulty out there” 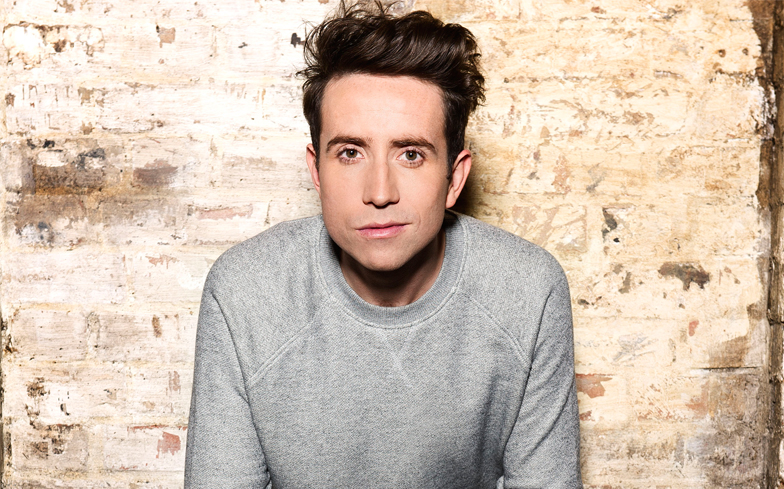 For 29 years the Albert Kennedy Trust have been dedicated to serving LGBTQ youth who have found themselves homeless.

With safe houses in London, Manchester and Newcastle, the charity makes sure the most vulnerable in our community are kept safe and given the resources they need until they are secure enough to manage their own independence.

To raise funds for the important work they do, they will hold their annual AKT Gala Dinner in London on 18 October which will feature a live performance from recent Gay Times cover star MNEK.

Radio 1 presenter Nick Grimshaw will be on hosting duties for the evening, which promises to be a star-studded event hoping to raise plenty of money for LGBTQ homelessness.

We caught up with Grimmy to talk about his new life of not having to wake up at an ungodly hour for the Breakfast Show, why the work AKT do is so important, and what he most loves about being a part of the LGBTQ community.

Hiya Nick! How have you been finding not having to get up so early in the morning for the Breakfast Show anymore?
It’s really great! It feels so insane that I would have ever woken up at quarter to five in the morning.

Just hearing you say quarter to five in the morning gives me shivers.
I know! Like, today I had come into town to watch a film and I set my alarm for 8am, and it’s amazing how quickly you get used to waking up late. Setting that alarm for 8am I was like, ‘God, that’s early!’ But it’s really not. But it’s really nice to not feel exhausted all the time!

What’s the one thing that you’re enjoying about the Drivetime show now that you’re on the radio in the afternoon?
I really like hearing about people’s days, because obviously in the morning people have just woken and tuned in, so it’s just a different setting for the listeners. At the end of the day people come to us and tell us about their funny days that they’ve had, or a mad thing that’s happened at work. I quite like hearing about that. You’re going to be hosting the Albert Kennedy Trust’s gala dinner later this month. Why is it so important that people support this charity and all the great work they do?
It was the first LGBTQ charity that was for homeless kids. It was the first one in the world. It’s revolutionary. They do so much amazing stuff. When I first heard of AKT, it really resonated with me. My friend Henry [Holland] had done some work with them and he was telling me all about it. It resonated with me because it’s pretty hard and scary to come out, and if you come out and your family are like, ‘We don’t want you to live here,’ it’s pretty devastating. I can’t imagine what that’s like, so AKT is a charity I just really want to work with.

There’s some statistic that 78% of the homeless people that the Albert Kennedy Trust have helped, the reason they are homeless was because they had come out to their parents and they didn’t want to live with them. That’s just such a horrible statistic. I really wanted to do something for the charity, so I’m going to host gala dinner which looks like it’s going to be really fun.

Although things are getting better for LGBTQ youth, how important is it that we don’t become complacent in our battle for true equality?
It’s so important. For me, I didn’t have a horrible experience and none of my close friends did either, but I think there’s still masses of homophobia and difficulty out there for young people who are coming out. Either if it’s to their school friends or to their family. It’s still a huge undertaking. You feel positive about the change you see. At my nephew’s school there are two trans kids and it wasn’t a big drama, and that’s so cool. But it’s still tough for a lot of people. People definitely shouldn’t think, ‘Oh everything is great now! Let’s have a party!’ It’s still a very difficult thing for a lot of people.

When equal marriage was legalised in England, Wales and Scotland, some people thought, ‘Oh great, job done – we’ve got all the rights’, but actually we’re still a way off when it comes to true equality.
Yeah, exactly. There are underlying levels of homophobia in the way we get treated differently to straight people. I just can’t imagine being out in school. I wasn’t when I was at school. School isn’t a particularly nice time for anyone.

Well it’s hard enough figuring yourself out at that age, before you can even think about telling people who you are.
Exactly, and it takes time to come out to yourself. But I just can’t imagine being thrown out by your family, and then your neighbours, and friends, and all of society are like, ‘No, we don’t want anything to do with you.’ That’s why Albert Kennedy Trust is such an amazing charity because who else is going to look after these kids?

What have you learned about the LGBTQ community during your time working with AKT?
That it actually feels like a community. Especially living somewhere like London where… I just got the tube and everyone’s busy and don’t really have time for each other as they’re rushing around. But actually, there is a community and I think that’s such a nice, rare thing in 2018. People have been through hardship, and people are little more compassionate maybe because it’s not been plain sailing for them growing up, or through relationships. I feel like the LGBTQ community is more passionate and friendly. I go out with my friends and they’ll bring a gang of their gay friends and it always feels a lot more fun, easy and inclusive.

How have you found being a positive role model for LGBTQ youth?
I read a thing where someone said I was a nice role model because my sexuality wasn’t the main crux of my output. I’ve never really sat at home and thought, ‘What’s my position as a role model?’

Do you get many LGBTQ kids getting in touch over social media seeking advice?
Not really, but when I’ve been out with the Albert Kennedy Trust I’ve been asked for advice and guidance. But not over Twitter or anything. I guess I’ve done it on a personal level in stuff with Radio 1 when we’ve done the Teen Awards campaigns. We’ve also done documentaries for Radio 1 about coming out, and the different ways people have come out across the world. Or there was one on being gay online. So I’ve done loads of stuff on that level, which I think is really important to do.

I suppose what you were trying to say earlier is that you’ve never let your sexuality define you.
Yeah, you shouldn’t have to be defined by your sexuality. You can if you want that to be your thing, but you shouldn’t have to behave in a certain way, or have to do certain things, or like certain music, or dress a certain way just because you’re gay. It’s just up to you to be you.

What’s your favourite thing about being a part of the LGBTQ community?
You can’t beat a good night out gay clubbing. I just don’t think you can. It’s the best music. Going to Block 9 at Glastonbury and being a part of LGBTQ makes me feel really happy. It reminds me of all the times you’ve gone to school discos and you’ve been like, ‘Ugh, I can’t really get into this, and I feel weird,’ and then when you get to go somewhere where the music is really great and there’s loads of people like you dancing and having a fun time. That’s when I feel part of a great, progressive community.

Are you enjoying the new generation of queer music artists coming through?
Yeah! Everyone that I’ve always liked – like Grace Jones, David Bowie, Prince and Madonna – have been overtly non-specific anything. They could be aliens! As opposed to just being gay or straight, they’re like proper musical aliens. I’ve always been drawn to people that are otherworldly.

There just seems to be so much great talent at the moment – from Troye Sivan and MNEK to King Princess and Janelle Monae – who happen to be a part of our community.
I think there’s probably been loads of gay people around, but in the 80s it was a bit more like, ‘Don’t say you’re gay.’ So I don’t know if that’s a trend or a new thing…

Yeah, maybe it’s now these artists feel confident to be open about their sexuality and can enjoy a successful career doing so.
Yeah, they can be themselves, rather than not saying anything they’re actually being pro-active. They’re being very vocal in who they are. I guess that’s the difference.

Are there any particular favourites you’re listening to?
Who am I listening to at the moment? There’s this artist called Lex Amor who I only heard on Saturday. She’s this female MC and she’s really great. I really love Nadia Rose. We just did a big fun party with Nadia and she’s amazing. I love her. She’s one of my favourite people I’ve seen play in a very long time.