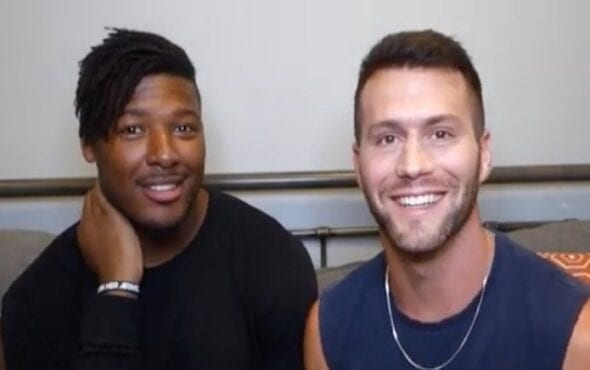 Russell, known for playing the defensive end on the field, opened up to BBC Sport during LGBTQ+ History Month to spotlight the inequalities faced by LGBTQ+ players.

Speaking to the BBC, Russell admitted tackling sexuality on the field can be “daunting”.

The 29-year-old athlete is a currently free agent and has played for the likes of the Dallas Cowboys, Tampa Bay Buccaneers and Buffalo Bills.

After facing bouts of stop and start plays, Rusell had to take a break from sports after facing a shoulder injury in 2019.

“It’s scary, daunting and paralysing but I’ve got to keep moving forward – I want to be the first, but never the last,” Russell said.

While taking time out, the athlete reflected on his bisexuality and how there’s no openly out players in the NFL.

Russell pondered on whether coming out would be “selfish” as he was able to financially provide for those he cared about and didn’t want to jeopardise his career.

With football culture so heavily rooted in heteronormative behaviours and attitudes, Russell was unsure about the reaction he would receive if he did come out.

The footballer’s personal break came in 2019. In late August, the NFL player penned a personal letter in ESPN about his experiences, struggles, and thoughts about being a Black LGBTQ+ pro footballer.

The sportsman held nothing back and wrote: “Today, I have two goals: returning to the NFL, and living my life openly.”

In the same year, Russell attended the Human Rights Campaign’s National Dinner and brought forward a message of positive visibility. His takeaway message was that “visibility is essential to life.”

In a powerful closing line, the sportsman wrapped up his interview explaining the importance of self-acceptance when coming out: “At the heart of everything, sports or not, that is the goal. Because no young kid should be walking around thinking they don’t deserve love and happiness.”

You can watch Ryan Russell’s Human Rights Campaign speech here or below.