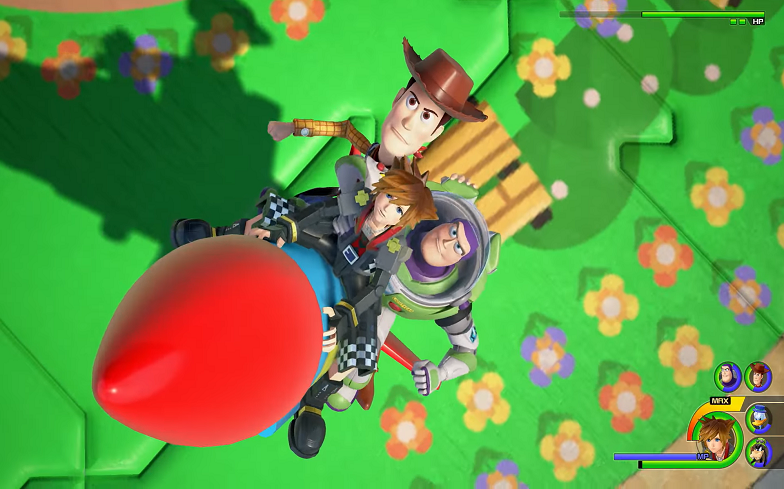 For those unfamiliar with the Kingdom Hearts series, the original game saw you take control of Sora, a young boy, who travels across various Disney worlds with Donald the Duck and Goofy in a bid to stop the Heartless from consuming the hearts of worlds. To do so, he must lock the keyholes to their hearts with the mystical weapon, the Keyblade.

The series has progressed since then, with the main plot of this game seeing Sora, Donald and Goofy trying to search for the seven guardians of light, while Mickey the Mouse and Riku search for previous Keyblade users to defeat Master Xehanort, and stop his plan to balance light and dark.

In the latest trailer for the game, which was released at the D23 Expo in Japan, it was confirmed that for the first time in the series, there will be worlds based off Disney Pixar films. The two currently confirmed films are Monsters, Inc. and Toy Story.

And the worlds will contain characters from both of those movies, like Sully, Boo and Mike Wazowski for the Monsters, Inc. one, and Buzz Lightyear, Woody, Hamm and Rex for the Toy Story world. Both of those movies villains, Randall and Sid haven’t been confirmed, but typically the villains from the movies do show up as bosses.

The Monsters, Inc. world takes place in the Scream Factory, and has locations like the Scare Floor and the Door Vault. The Toy Story world has Andy’s bedroom in a cut-scene, but the other two areas seem to be original locations.

Previously, worlds were only based off of Disney property, like The Nightmare Before Christmas, or Hercules.

And for a small while it seemed that this game would follow that trend, as the two new worlds that had previously been announced were Tangled and Big Hero 6.

New footage from the trailer also showed Rapunzel and Flynn Rider in action in a Tangled world, and an Ariel summon showing up, hinting that The Little Mermaid may not have a dedicated world this time round.

Kingdom Hearts III is set to launch later this year, for PlayStation 4 and Xbox One, and you can watch a trailer for it on the official Disney Pixar Twitter account. However, the trailer is only in Japanese, so if you need subtitles, you can watch the trailer here.