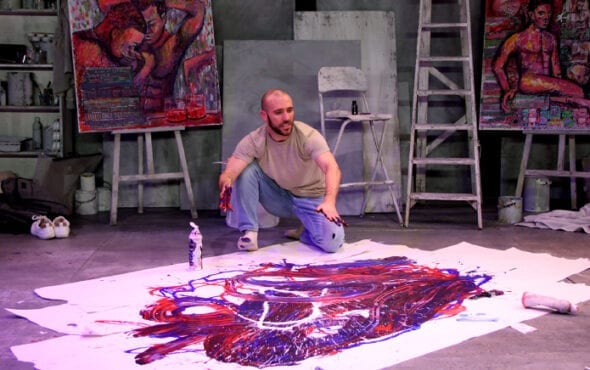 The new play, written by Paul Harvard and directed by Jon Pashley, has opened at London’s Charing Cross Theatre.

For those looking for a feel-good festive show, GHBoy is not the one – set in East London’s party scene, it explores issues of drug addiction, sex addiction, and their impact on mental health. There’s also talk of an unnamed killer following the unexplained deaths of several young men. At times it’s a difficult watch. The story focuses on the life of Robert (Jimmy Essex), a gay man in his 30s, who has led a pretty hedonistic lifestyle up until the present day. He tries to get himself clean and back on the straight and narrow after his much-younger boyfriend Sergi (Marc Bosch) unexpectedly proposes.

There are a few issues. There’s a problem with pacing – the first few scenes feel like a very slow burn, and it takes a long time to find its feet and introduce us to something interesting. We also weren’t sold on several of the elements of the story; the main topics explored here are ones we’ve seen on the stage countless times before. Gay men taking drugs, going to clubs, going to saunas, struggling to get clean – we’ve seen it before, and in more creative and engaging ways.

When GHBoy does start to consider something a bit more novel, it shies away before we get a proper look. The narrative about the mysterious killer is touched upon a few times but feels disappointingly unresolved by the play’s conclusion. Potentially interesting discussions surrounding the shame associated with an HIV+ diagnosis, or the fetishisation of black men within the gay community, are only touched upon superficially before the conversation is swiftly moved on. Given that both of these issues are clearly integral to the life of the main character, we’d have liked to have seen more in-depth and considered explorations of these. The show is redeemed by a handful of impressive performances. Jimmy Essex, as protagonist Rob, is on-stage the whole time in what appears to be a physically demanding role. We particularly enjoyed Aryana Ramkhalawon as best-friend Jasminder and Buffy Davis as Rob’s mum Debbie – both brought some warmth and a sprinkling of much-needed humour to proceedings. Sadly we received a post-press night update that Buffy Davis will not be completing the run due to injury – she will be replaced by Nicola Sloane for the remaining performances.

At times GHBoy feels like it’s biting off more than it can chew – weighing in at 80-minutes, it’s trying to cover a lot of issues, many of them pretty big and serious, in a very short time frame – and unfortunately it’s only a partial success. It aims high but never quite gets there – we left the theatre wanting a lot more.