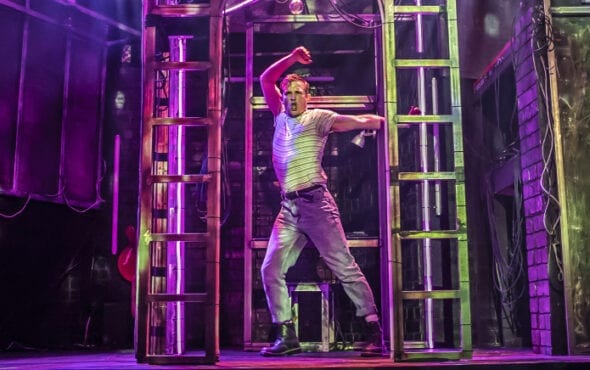 The new show, written by and starring Jack Holden, has opened at London’s Duchess Theatre, directed by Bronagh Lagan.

Every so often a show comes along and catches us completely by surprise, and new gay play Cruise, written during lockdown by the multi-talented Jack Holden, has just done exactly that. It’s sort of a one-man show, although composer John Elliott also appears on stage throughout the production to perform the music live. His presence adds a welcome extra depth to a number of scenes.

The tale is told as a telephone call between Jack, a young gay man volunteering for Switchboard, and caller Mikey, an older man who recounts his stories of living through the AIDS crisis of the 1980s. It’s a smart premise which enables the audience to consider the parallels between surviving that pandemic and our own journeys through the current one. It also provides a really fascinating education of 1980s Soho without ever coming across like a history lesson.

Cruise achieves so much it’s tricky to decide which standout feature to rave about first. We were particularly impressed with how the play feels like it’s so full of people in such vivid places. Over the course of 90 minutes we’re introduced to a quirky older gentleman who wears a maroon suit and speaks Polari at a private members club; a large and in charge drag queen, evidently unfamiliar with a Bic razor, commanding the stage at the Royal Vauxhall Tavern; Mikey’s lover Slutty Dave who steals his heart at a karaoke bar; and so many more besides. That all these moments are painted so vividly is testament to Jack Holden’s sheer talent – his is a real powerhouse performance.

The writing is superb – full of poetic moments contrasting with some deliciously-delivered zingers. It’s honestly much funnier than we expected it would be given the subject matter of the show, but there are also plenty of poignant lines too, which deliver moments of counterpoint. The stories are evidently thoroughly researched and, brilliantly, Holden takes time to acknowledge the ignorance of his youth and how lucky he is to be able to get older.

Frankly, we loved Cruise. The themes it covers are similar to those explored in Russell T Davies’ It’s A Sin and if you were a fan of that then we’re sure you’ll adore this, too. It feels like a real love letter to 1980s London, celebrating and commemorating those we’ve loved and lost, and telling their stories with respect, humour and a genuine warmth. It’s not just an incredible tour-de-force for Jack Holden; it’s a potent reminder of the power of live theatre, and we’re absolutely thrilled to have it back.