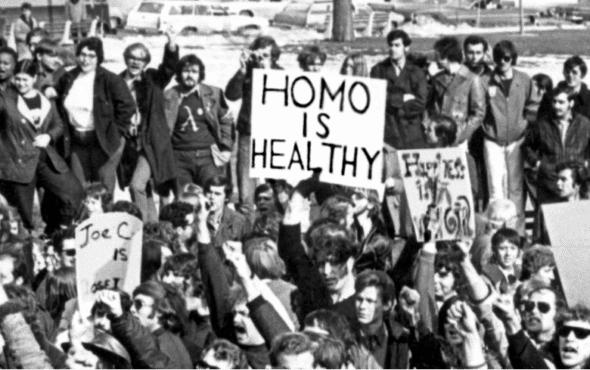 The American Psychiatric Association (APA) declassified homosexuality as a mental disorder in 1973.

A new documentary, Cured, is due to make its debut at the virtual edition of Outfest Los Angeles on 24 August.

Deadline reports that Cured will explore how the APA finally declassified homosexuality as a mental disorder in 1973, something which an eyewitness in the documentary calls “the most important moment in gay liberation history”.

Cured was directed by Patrick Sammon, who directed Codebreaker, a documentary about the life of gay codebreaker Alan Turing, and Bennett Singer, who was a consulting producer for Codebreaker and has also produced documentaries like The Question of Equality, American Experience and All We’ve Got.

Cured explores the campaigns against the APA by queer communities through a mixture of archival footage and eyewitness testimony, with Dr. Charles Silverstein, an LGBTQ+ activist, explaining how they tried to be ‘cured’ of their sexuality because of the APA’s stance.

The documentary also examines methods used to try and ‘cure’ people of their queerness, as well as the role that John E. Fryer, the first American psychiatrist to come out as gay, played in the movement.

Fryer arrived at the APA’s 1972 conference under the name of Dr. Henry Anonymous, and wearing a mask and speaking through a voice distorter to conceal his identity, gave a speech at a panel titled’ Psychiatry: Friend or Foe to the Homosexual?; A Dialogue’ in which he spoke about gay psychiatrists who had to hide their identity.

It also looks at activist Ron Gold’s 1973 speech to a group of psychiatrists in which he stated “Stop it, you’re making me sick!”

After its first screening, the directors of Cured will be joined by LGBTQ+ activists Don Kilhefner and Rev. Magora Kennedy, both of whom appear in the documentary. The discussion will be moderated by Steven Canals, a producer of POSE, who is currently producing 81 Words, a TV docu-series exploring the same idea.

Matthew Shurka, the co-founder and chief strategist of Born Perfect, which oppose ‘conversion therapy’ in the United States, praised the film, saying: “CURED is not just a brilliantly told story, it is a call to honor our legacy of activism and empowerment by continuing the fight to end conversion therapy once and for all.”

The crew behind the documentary hope to use it as a form of outreach after it premieres, aiming to highlight the effort to ban ‘conversion therapy’ across the United States, educate healthcare professionals about LGBTQ+ needs and celebrate the roles that our LGBTQ+ pioneers and elders played in allowing us to live the lives that we do today.

The trailer, which is guaranteed to leave you with goosebumps, can be watched either here or below.