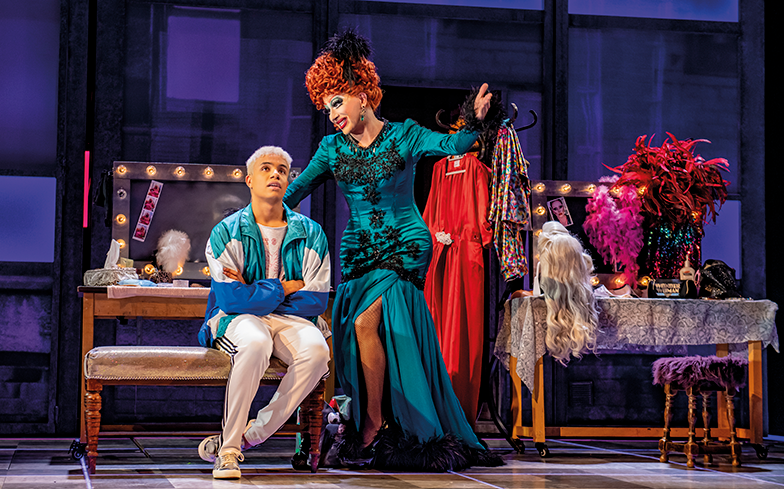 New cast members have joined the previously-announced Noah Thomas who has stepped into the lead role as teenager Jamie New.

Award-winning musical Everybody’s Talking About Jamie, featuring music composed by The Feeling’s Dan Gillespie Sells, continues to go from strength to strength. It recently celebrated its second birthday on the West End; a touring production is scheduled to begin in February; and a major film adaptation is the in works, expected to be released in October. This week we were invited to check out the new cast at London’s Appollo Theatre.

Fans will be pleased to learn it continues to dazzle and delight on the West End. Noah Thomas is wonderfully charismatic as 16-year-old Jamie New in his West End debut (he’s currently a third year drama school student!) – hilariously flambouyant but bringing tenderness and vulnerability to the role when required. Also joining the cast are Hiba Elchikhe and Jordan Ricketts as students Pritti Pasha and Dean, while David O’Reilly and Leon Craig join as drag queens Laika Virgin and Sandra Bollock.

Bianca Del Rio illuminates the stage as local drag celebrity Loco Chanelle, bringing her trademark sense of humour to the show. Meanwhile Melissa Jacques as Jamie’s mum Margaret and Sejal Keshwala as her friend Ray make a brilliant double act. There’s a real warmth and humour in their friendship, while Melissa’s rendition of He’s My Boy is a lovely moment.

Ultimately, Everybody’s Talking About Jamie continues to be the feel-good musical sensation it has always been since it first opened at the Sheffield Crucible back in 2017. The heartwarming tale of Jamie, the council estate teenager who dreams of becoming a drag superstar, is currently booking at London’s Appollo Theatre until 29th August while a UK tour kicks off on 8th February.