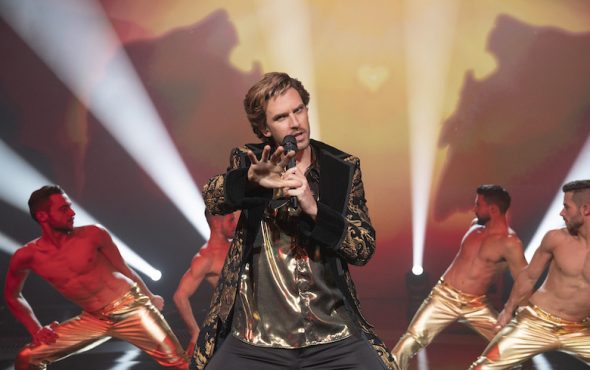 Spoilers ahead for Eurovision Song Contest: The Story of Fire Saga.

The Netflix film tells the story of small-town singers Sigrit and Lars (Rachel McAdams McAdams and Will Ferrell), who are given the opportunity of a lifetime when they’re picked to represent their country at the Eurovision Song Contest.

Directed by David Dobkin (The Wedding Singer), the film also stars Demi Lovato as Katiana – the “best and most angelic singer in all of Iceland” – and Piers Brosnan as Lars’ father Erick, aka “the most handsome man in Iceland.”

The standout, however, is Beauty and the Beasts’ Dan Stevens as Alexander Lemtov, the absurdly campy and charismatic Russian favourite to win Eurovision who woos Sigrit in hopes of giving her “mansions, palaces, wi-fi in every room.” Lemtov is constantly flanked by his entourage of muscular, shirtless dancers and in one scene, he outrageously flirts with Kevin Swain (Jamie Demetriou) – yes, the Kevin Swain! – a flamboyant creative who is hired to help Lars and Sigrit win.

To Lars’ discontent, Sigrit respects Lemtov’ artistry and befriends him (at one point, Sigrit awakens to find that Lemtov has spent six hours braiding her hair). Towards the end of the film, she asks the question: “Are you gay?”

This is where Eurovision gets political. In 2017, Chechen president Ramzan Kadyrov said rumours of the country’s ‘gay purge’ were false because there are no gay men in Chechnya, stating “we don’t have these kinds of people here.” A year later, Russia’s justice minister claimed government officials were unable to find any evidence of LGBTQ people in Chechnya, telling the United Nations: “The investigations that we carried out did not confirm evidence of rights’ violations, nor were we even able to find representatives of the LGBT community in Chechnya.”

Lemtov and Sigrit’s subsequent back-and-forth shades these ludicrous allegations, with Lemtov responding (in denial): “No… No no no, of course not, I am Russian. There are no gay people in Russia. 100%, the fucked off truth. No gay in Russia.”

LGBTQ+ ally Sigrid tells him, “Statistically speaking, I think that is impossible,” before questioning whether he identifies as gender fluid or non-binary. “No no no binary, he/him pronoun. He/he,” he hits back.

The scene is pure satire, and highlights the very real trauma faced by LGBTQ+ citizens in Russia.

Those who identify as part of the community live in secret due to Russia’s strict anti-LGBTQ+ laws and fears of being ostracised from their friends in family. After the ‘gay purge’ was reported in 2017, gay men were being murdered by their own family members, as authorities in the Russian Republic told parents to kill them – or they’ll do it themselves.

Kadyrov also publicly declared that he wanted all LGBTQ+ people in the country to be eliminated by Ramadan, despite his ridiculous belief that there are no gay people in the Chechen Republic.

A documentary detailing the horrors of the ‘gay purge’ will be released 30 June on HBO Max.

Eurovision Song Contest: The Story of Fire Saga is now available to stream on Netflix.