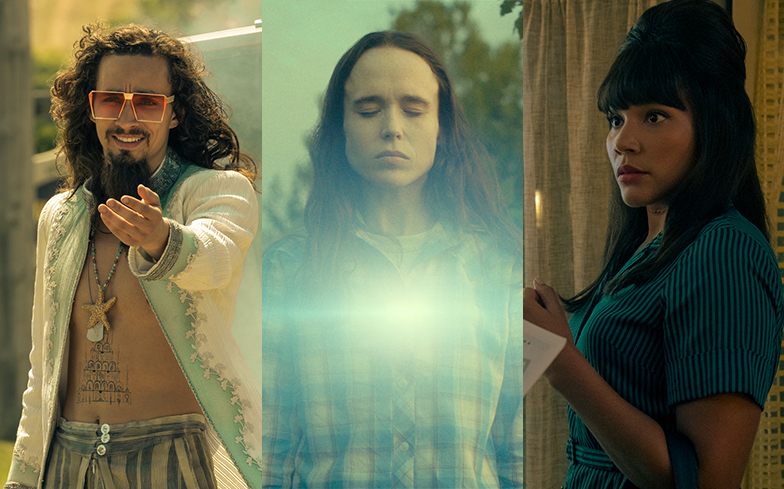 Netflix have released new images for The Umbrella Academy season two ahead of its premiere next month.

Based on the Dark Horse Comics created and written by Gerard Way and illustrated by Gabriel Bá, the fantasy drama follows a dysfunctional family of superpowered beings who reunite after their father’s mysterious death.

The first season of The Umbrella Academy received universal critical acclaim for the cast’s performances, visual effects and storyline, and was ranked the third most popular series of 2019 on Netflix.

Ritu Arya, Marin Ireland, and Yusuf Gatewood are new additions to the season, which will consist of 10 episodes.

Following the explosive events of the season one finale, which saw the Hargreeves using Five’s powers to escape Vanya’s apocalypse, the team have been transported back in time to 1960 in Dallas, Texas.

Twist is: each hero has been scattered across Texas over a three year period, meaning “some having been stuck in the past for years, have built lives and moved on, certain they’re the only ones who survived.”

The official synopsis reads: “Five is the last to land, smack dab in the middle of a nuclear doomsday, which – spoiler alert! – turns out is a result of the group’s disruption of the timeline (déjà vu, anyone?).

“Now the Umbrella Academy must find a way to reunite, figure out what caused doomsday, put a stop to it, and return to the present timeline to stop that other apocalypse. All while being hunted by a trio of ruthless Swedish assassins.”

Check out 10 images from the highly-anticipated, 60s-inspired season below.