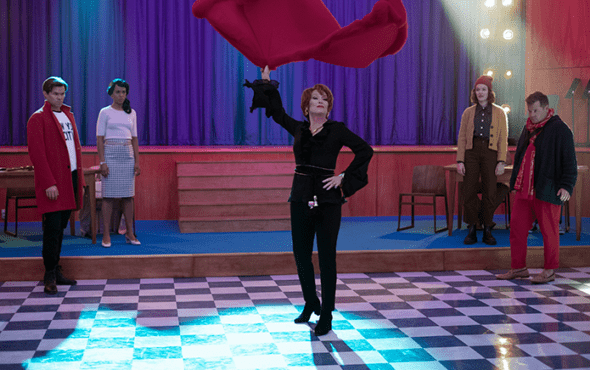 It looks queer as HELL.

Netflix have shared the first photos from their upcoming musical dramedy, The Prom.

Based on the critically-acclaimed Broadway play of the same name, the film follows four actors as they travel to to the conservative town of Edgewater, Indiana, to help a lesbian student (Jo Ellen Pellman), who has been banned from bringing her girlfriend to prom.

“You’ve got to have some fun. This is based on a real thing that happened to kids in Indiana, and has a happy ending, everything we dream of in 2020,” Streep told The Hollywood Reporter. “I wanted to do it. So, the character is a big asshole.

“I tried very hard to bring that part of me forward.”

Director Ryan Murphy added: “I found it very healing to be able to put those images to film. I didn’t have that. If only I would have had this feeling of acceptance and belonging, how different my life would have been.

“I went to my junior prom and the next day my parents took me to a psychiatrist to cure me. Thankfully, I had a really good shrink, who at the end of our several sessions called my parents in and said, “You have a choice here: You can try and change him and lose him, or you can accept him and love him.”

“I was very blessed. When I went to my senior prom, I had been through that but I still took a girlfriend because I wasn’t allowed to come in with my fellow. The prom is very emotional for me, as you can tell.”

Pellman said the film will show LGBTQ+ kids across the world that “they are worthy of a big, joyous happy ending,” adding: “There are people out there, who you might not even know yet, who can’t wait to love you and support you.”

The Prom will be released 11 December on Netflix.

You can read the cast’s interview with The Hollywood Reporter here and check out the first photos from the highly-anticipated film below.