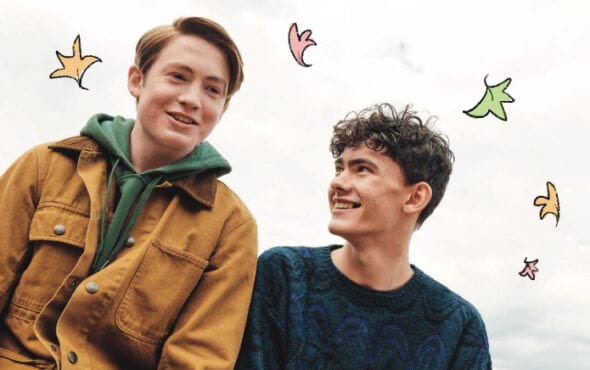 Netflix has announced the cast for the live-action adaptation of Heartstopper.

Kit Connor (His Dark Materials) and newcomer Joe Locke have been cast as the two leads, Nick Nelson and Charlie Spring, following an audition process that saw over 10,000 people try-out for the anticipated teen drama.

Produced by See-Saw Films, the series will adapt the graphic novel of the same name from Alice Oseman, which takes place at a British all-boys grammar school and follows Charlie, who is openly gay, and Nick, a rugby player, as they develop feelings for one another.

Doctor Who and Sherlock’s Euros Lyn has been attached to direct the half-hour series.

Oseman said in a statement: “Nick and Charlie have existed as characters for almost a decade, and are two of my most beloved characters, so I was slightly apprehensive about the casting search, but I am so happy and excited that we’ve cast Kit and Joe.

Lyn said he “can’t imagine a more perfect pair than Kit and Joe to play Nick and Charlie, and bring their joyous love story to life on screen.”

When we spoke to Oseman about the charming graphic novel, which has received heaps of critical acclaim, she said it was important for her readers to “learn about the issues and tensions that young LGBTQ+ people face”. “It’s through stories like this that straight and cis people can improve their empathy,” Oseman told GAY TIMES.

“I’ve had so many people reach out to me saying, ‘It’s so nice to see someone like me in this comic just falling in love and having a cute little romance’, but also from people saying, ‘Nick’s journey has helped me come to terms with being bisexual’, and stuff like that. For me, that’s the most wonderful thing.”

Oseman, who has written four Heartstopper novels (so far), will write the series.

Patrick Walters, Executive Producer as See-Saw, said: “Getting to work with Alice, Euros and actors as talented as Kit and Joe on Heartstopper is a dream come true.

“They both have such passion and consideration for the story and it feels like we are creating something very special. Heartstopper is a celebration of young queer love in all its forms, and we hope audiences will take the actors and this story to their hearts.”

Heartstopper is currently filming in the UK until Summer 2021.