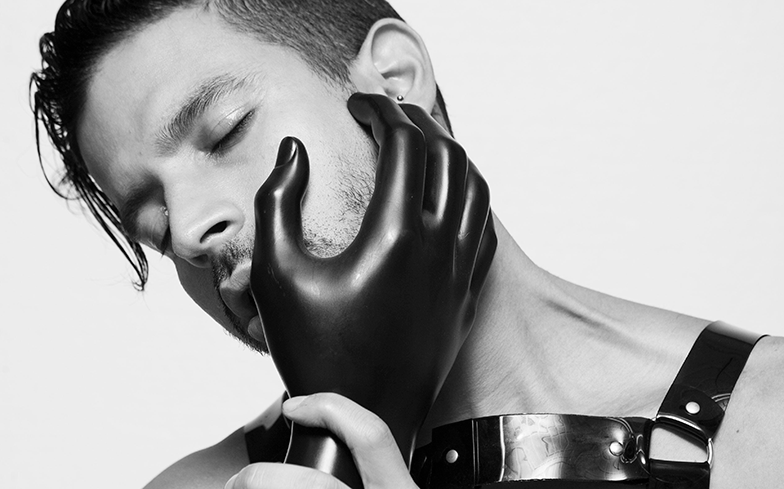 “For us to choose love, those of us with voices need to use them to speak up, otherwise there is no point in us having platforms.”

NEO 10Y became a viral sensation in 2016 with his controversial three-part music video for The Kid That Killed Tr*mp. The video followed the political singer-songwriter as a Mickey Mouse impersonator who has sex with a man in a Donald Trump mask, and then sets him on fire.

Two years on and several hundred death threats later, NEO 10Y – birth name Nik Thakkar – has made his stamp on the music industry with over a million streams for his dark-pop anthems and countless protests on the BBC and National Geographic.

Today, he’s released two more fantastic tracks, Dopamine and Poems To Fuck To, so we caught up with the British multidisciplinary artist to discuss his activism, the challenges faced by LGBTQ acts in the music industry, and the importance of celebrities using their platforms to speak up on political issues.

For those who may not know, what’s the story behind your stage name?
You’re getting my geeky side out right away then! NEO 10Y is an evolution of the word “neoteny” which means the retention of childhood characteristics in adulthood, the idea of leading with your heart, the purest version of yourself, as opposed to the systemically abused humans that we sometimes become. 10 as a number means a lot to me from a numerology standpoint, it’s also the only number that has both elements of the binary code together which I think is really beautiful and shows a sense of “completeness”. It kinda sums up what I am as person and an artist and what I stand for. Even my dog is called 10.

How did you get into music?
Music has always been with me, I was trained on the piano and vocals growing up, and taught myself the guitar. I’ve been playing open mic nights forever, but it was only about two and a half years ago that I started working on original song ideas for myself as NEO 10Y. From then it literally started with one song and evolved, and I’m so grateful that I’m still doing it today. Who were your influences growing up?
They were so varied from Britney to Kurt Cobain and Aaliyah to Grace Jones and Linkin Park to 2Pac. It’s such a mix. I grew up on a diet of MTV and Nickelodeon. My family and ancestry are influences from a spiritual perspective and literally not having any role models that looked or were like me probably helped me to actually be myself instead of trying to replicate someone else’s identity.

Your work involves a lot of political activism. Why is it so important for you to do this?
I think we are at a crucial time for humanity, a tipping point and there is a distinct right and wrong side of history. For us to choose love, those of us with voices need to use them to speak up, otherwise there is no point in us having platforms.

What kind of response have you received from fans about your work?
I’d say it’s a mix. I had a kid message me recently saying that he was considering suicide and didn’t do it because he found my song Janis on genius.com and saw a light at the end of the tunnel. Then again, I had some really anti-vegan messages sent to me after I did some talking head segments on the BBC this year and lots of trash death threats after my Tr*mp film. Mostly it’s love and light and curiosity about my thought process though and I’m actively inspiring a generation to be the best versions of themselves.

Do you think artists with massive platforms should speak up more about political issues?
Yes! Although I only really stanned Look What You Made Me Do, I am glad that Taylor Swift spoke up this week, finally. It’s a really important time for our generation that is more empathetic to actually step into the role of managing the conversation and future proofing the planet. It’s our generation that can make that change.

There’s some incredible music coming through at the moment for queer artists – why do you think it’s all happening now?
Queer people are generally more conscious beings, by default. The universe is non-binary and the global population is becoming more woke thanks to the internet and group consciousness. Music brings people closer to God/the force/the universe. Queer people are the honest and conscious voices that will lead us into the future. Unconscious artists just need to be side lined now. They’ve had their time and they have fucked up the world enough.

What do you think are some of the challenges LGBTQ artists still face in the music industry?
Homophobia is systemic, and people who identify as heterosexual are generally still stuck in their way of thinking about queer identities. These people struggle to buy into a queer voice because of their latent homophobia, they think that it makes them queer or whatever their sad and systemic issue is. That is still a massive percentage of the global population and the old model of the music industry is catering to a numbers game. Queer artists are not as profitable for the music industry… yet. However, I believe that through being an independent artist, you are more true to your craft and your genuine feelings and that queer/non-binary voices are the future of music and much closer to the source/group consciousness.

How important is queer visibility for LGBTQ youth?
It’s more important than ever, especially right now. It not even about being visible, it’s being audible and speaking up for what you believe in. You don’t need to look or dress a certain way to be an empowered member of the LGBTQ community, you just have to be an honest and true version of yourself and stand up for what you believe in when those around you are being regressive. Dopamine and Poems to Fuck To are sonically and lyrically linked. What was the inspiration behind them?
Poems To Fuck To is sort of a manifesto song about me as an artist, I’ve had the lyrics “disidentify with your pretty mind” tattooed on my arm for months now, so I am really excited for this to be out. It also acts as a descriptor for Dopamine, which is a literal song to fuck to. Dopamine is about finding happiness within yourself, so that we can collectively find world peace, but it’s through my lens, so has elements that are true to how I find my happiness, my dopamine. Whether it is love, fruit, weed, sex, my puppy, technology, art etc, it’s different for everyone. I think it’s healthy to be aware of that within ourselves so that we can evolve in the right direction. From a lyrical standpoint, the songs have a juxtaposition where in Dopamine, I sing “I love it baby when you’re still inside of me”, and in Poems To Fuck To, I sing “I’m still inside you, from every single hit we take”. The videos show a two-part journey of raising my own vibration, it starts in a tunnel under the Thames and shows the story of me dragging myself into the future, symbolism for the human race. It ends at the top of the stairs and with a performance scene shot in LA.

What can people expect from a NEO 10Y performance?
When I played at the Gay Times event in London last year called Forbidden Fruits, I had a dancer who was my shadow with me and we perform partially choreographed and partially improv. I also play guitar for some of the songs on stage and movement has really evolved for me this year. I have been doing a lot more yoga and dance and incorporating it into my shows. Depending on the venue, I have hella trippy visuals and the lighting and stage shows are quite immersive for the audience. When I did a gallery takeover at Soho Revue, I had a reenactment of my Tr*mp fucking Mickey scene in one room and there was another room visual reality experience for a 360º film that I made, so it really depends on the gig but I’m a multi disciplinary artist so I try and make sure the journey is a really trip.

What can we expect from you next?
I just sent this smash called Reality Check to master that I want to release and I’m working on some other tracks. I’m not rushing into an album because everything I make is already so cohesive that if someone wants an album, it kinda already exists. I’d like to play Jools Holland too and tour more.

NEO 10Y’s two new singles, Dopamine and Poems To Fuck To, are available now on iTunes and streaming services.