You need to see P!nk slay the National Anthem at the Super Bowl 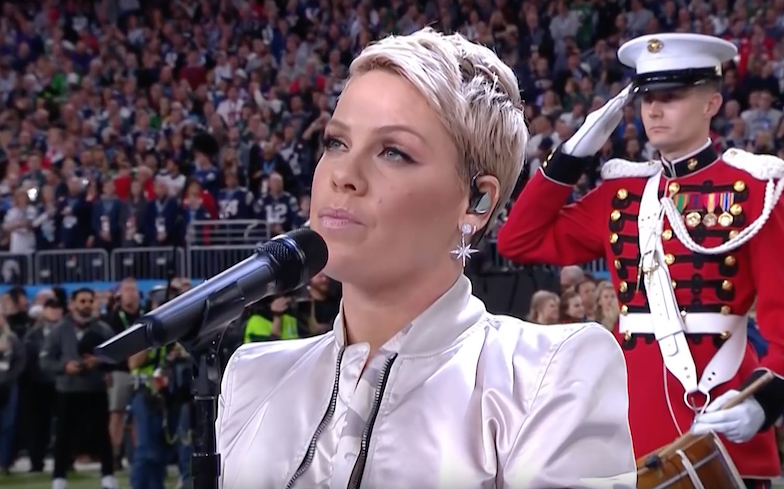 P!nk has lit-er-ally flown over the most respectable moguls in the music industry, performed live whilst scaling a skyscraper and somersaulted around a ring of fire, so she sure as hell wasn’t gonna let the flu prevent her from performing the National Anthem at this year’s Super Bowl.

Keeping her feet firmly on the ground, the singer/songwriter delivered a stunning rendition of The Star Spangled Banner in front of 73,000 people, earning universal praise from fans and critics.

The 38-year-old was the latest pop diva to lend her vocals to The National Anthem, following in the footsteps of Beyoncé, Cher, Lady GaGa, Christina Aguilera and Mariah Carey.

Can we get P!nk to do the main show now please?

P!nk’s eighth studio album – Beautiful Trauma – topped iTunes in over 65 countries when it was released last September, and has sold two million copies worldwide. Not bad in the age of streaming eh?

Its lead single – What About Us – reached the top ten in 25 countries, and was recently certified platinum in the UK.

Last week, she released the video for her third single – Wild Hearts Can’t Be Broken – accompanied by a donation to UNICEF.

“In honor of this incredible organization, in honor of this video for ‘Wild Hearts’ and in honor of girls and women all over the world standing up for themselves, I am going to be making a donation in all of your names to this wonderful organization and I encourage you to do the same if the spirit moves you,” P!nk told People magazine.

Related: P!nk and Christina Aguilera “may or may not” have collaborated on a new song!