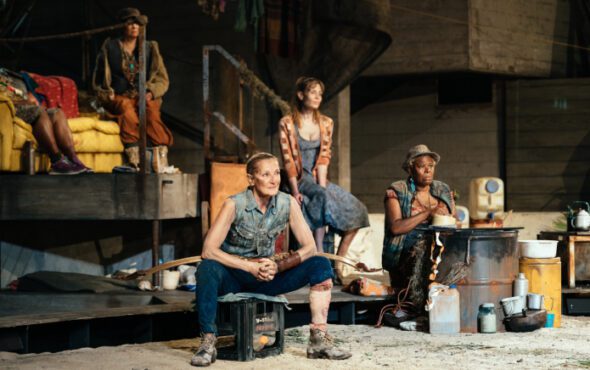 Kae Tempest’s electrifying re-imagination of Sophocles’ Philoctetes, starring an all-female cast, has opened at the National Theatre in a production directed by Ian Rickson.

We’re big fans of the National Theatre: we went to check out Under Milk Wood there a few weeks ago, their first production post-pandemic, and we really enjoyed our return visit – it’s one of our favourite theatre spaces, and we adore their programming. In particular we’re looking forward to The Normal Heart – set in New York during the early 1980s, it’s one of the most significant plays about the AIDS crisis – which opens next month. Their current show, Paradise, is their first returning the Olivier Theatre space to full capacity, and we must say it’s really great to be back.

It’s an update of Greek myth Philoctetes, which has been written by poet and Mercury prize nominee Kae Tempest, and it’s a powerful, political and surprisingly funny play. Central to its success is the strength of the individual performances: Lesley Sharp is utterly captivating as our tragic hero Philoctetes, the wounded soldier who has been exiled for years. She absolutely commands the stage – angry and sharp when she needs to be, but believably vulnerable as the role requires. Her biggest achievement, however, is showing just how much of what we think of as masculinity is simply a performance.

Both Anastasia Hille as Odysseus and Gloria Ibianyo as Neoptolamus deliver impressive turns, too. They are the soldiers who visit the island in an attempt to persuade their wounded comrade to return for one last battle, and are the perfect foil for each other. The chorus, who spend much of the play in their camp to the side of the auditorium but venture onto the main stage at key moments, give authentic performances that proffer the illusion of an actual island community, as opposed to simply being there to further the narrative.

There’s a lot to like about Paradise. An update of a Greek myth may not initially sound like everyone’s idea of a fun night out, but it’s surprisingly entertaining, thanks to Kae Tempest’s razor-sharp writing and some excellent performances. This is a truly absorbing piece of theatre – one we’d gladly recommend.