The exhibition will be celebrating Liverpool’s rich LGBTQ+ history.

Due to the coronavirus pandemic that is still raging on, museum exhibitions across the country are currently closed.

However, National Museums Liverpool is getting around that for LGBT History Month with an online extravaganza.

Most of the exhibitions will be starting on 1 February, but from 25 January, a beautiful House of Suarez Vogue Ball dress will be on display in one of the museum’s windows. The gown and headpiece were originally commissioned for the Liverpool River Festival in 2019, with Liverpool’s seafaring history being its inspiration.

It was then featured in the House of Suarez Vogue Ball, where the fiercest voguers and performers battled it out in an underwater themed spectacular.

The online programme is continuing to grow, but so far it has been confirmed that it will feature commissioned works, including new poetry from local writer Felix Mufti-Wright and interviews with leading figures in Liverpool’s LGBTQ+ community including Detective Sgt. Christian Owens of Merseyside Police and Caroline Paige, the first openly transgender officer in the British Armed Forces.

National Museums Liverpool will also have a focus on figures like Alan Turing and his contribution to artificial intelligence, a round-up of famous activists and scientists to follow and some showcases of LGBTQ+ art history across its other venues. 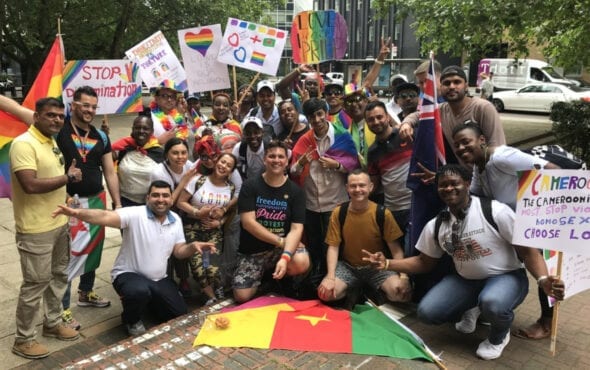 Is LGBT+ History Month needed now more than ever?

Also confirmed are an exploration of some of the LGBTQ+ community’s hidden past, including Polari a coded language used by gay men when homosexuality was illegal in the United Kingdom, and a timeline of LGBTQ+ history alongside a mini-LGBTQ+ dictionary.

There will also be a digital display of artistic responses from members of the public representing LGBTQ people, places and events that mean something to them. In a statement, Kay Jones, the lead curator of community history, said: “Although we’re unable to come together physically for LGBT+ History Month, we want to unite people through this online festival which celebrates the stories and experiences of LGBT+ people, past and present.

“We are still adding to the online programme and are hoping to add more in-venue elements once we can re-open.

“The House of Suarez dress in the window of the Museum of Liverpool will offer a fierce and fascinating physical presence during February. Visitors will be able to see it up close and personal when we open our doors again.”

Matt Exley, the Learning and Participation Manager and Co-Chair of NML’s LGBT+ Staff Network said: “A journey through Liverpool’s LGBT+ history – from gay life at sea and in port to the modern gay quarter round Stanley Street – is both rewarding and fascinating.

“From LGBT+ terminology and timelines, to hard-hitting interviews and hidden histories, this collection of editorial content examines both historical and contemporary explorations of sexuality and gender.

“We are particularly excited to be able to showcase a series of contributions from members of Liverpool’s LGBT+ community, responding artistically to the important people, places, and events in their lives.

“We are also proud to be working closely with GYRO (Gay Youth R Out), the UK’s oldest LGBT+ youth group, on a project to explore activism and capture their hopes for the future.”