Nakhane Touré interview: ‘My positivity is a f**k you to all those people who wish me ill’ 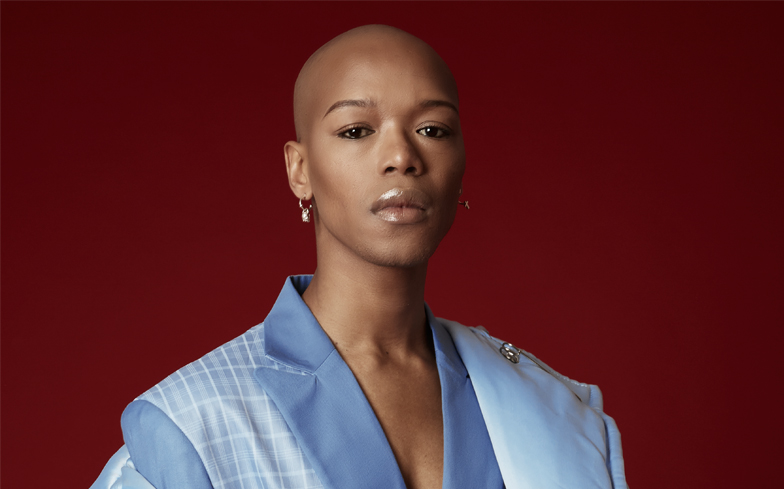 As a proud (and out) gay man, the young singer and actor has fought for his place as a visible member of the community.

However, with a heavy religious upbringing and this native town struggling with the progression of LGBTQ rights, Nakhane knows first-hand that not everybody shares the vision of him living proudly.

Nakhane speaks to Gay Times about his personal journey to finding and celebrating himself, his departure from the world of religion, why stereotypes aren’t something we should totally fear, and facing the onslaught of threats to his life.

Your music is an open and honest look into both your life and occasionally your body. Why do you approach work this way?
From a young age, before I was writing my own music – when I was only writing little stories and terrible poems – creativity was something that gave me a space to purge. I know the problematics of ‘confessional’ art – as if there is no agency in it – but it was a space for me to say what I couldn’t say back then in my waking life. It gave me courage. This was my work, and I could do whatever I wanted with it.

In terms of the body; I’ve been thinking a lot about that lately. There’s a Moses Sumner lyric that goes, “I’m not a body/the body is but a shell”, and my relationship with my body has always been a distant one. I’ve never really hated it. It was just… there. There was that time in high school when I wished I was a little taller, but then read that Prince was short so I knew it meant nothing. Generally, and especially now, it’s a canvas,. It’s something to be used – with all its history and politics – to further the work.

With such honesty, does that make you vulnerable in almost everything you then do?
I honestly don’t know why one would become an artist if they do not allow themselves to be vulnerable, but the degrees vary, of course. I think that whether one knows it or not – and however intellectual and distant or cold their work is – they are still offering themselves to the world. That is frightening. That’s vulnerability.

Do you find the mixing of your sexuality and your religion a difficult one? Does it present daily or reoccurring challenges?
I no longer identify as Christian, so I no longer have any difficulties. I did in the beginning when I was trying to marry my Christian faith with some level of homoeroticism. It was too difficult and I was too guilt-ridden. I left Christianity and asked myself where my people were, spiritually, before we were colonised. It’s an atavistic journey but I’ve found beauty and relief in my Xhosa spirituality.

Congratulations on the announcement of your second album. What can we expect from You Will Not Die?
I spent the last four years of my life writing this album so expect blood, sweat and tears.

With my debut album, I was dealing with a lot of the things that were happening at that particular time in my life. With this one, I felt I needed to go back to my childhood, go back to the formative years, and deal with some traumas musically. It’s not all joyless, but I had to face myself, my family, the music that formed me and some people I wish I never met. The joke with my friends is that the album is, “Trauma, but make it fashion.”

And we’ve got to talk about the album cover. It’s moving and empowering…
It’s a simple image, shot by one of my closest friends, and photographer, Tarryn Hatchett. Initially I had chosen a black and white photograph that obscured my face. I thought that the album was so personal, that I felt I needed maybe to obscure something about myself. Tarryn played to my vanity and I started having some ideas. I knew that I wanted it to have some level of androgyny. I knew that the background had to be red and that it had to have movement – however slight- and I also knew that every time I looked at it I wanted to feel powerful. It is heavily influenced by Ren Hang’s work.

Has being open about your sexuality ever presented hurdles in your career professionally?
No one has ever said, “We will not hire you because you are queer” to my face, but micro aggressions have been experienced.

So how do you ensure that you don’t get boxed into a stereotype as an out artist?
I believe that we all possess a tiny bit of a stereotype. Acknowledging that helped me. And it also humbled me. Every time I looked at that artist that I was judging because I thought they were a stereotype, I remembered that I was also probably being looked at by someone, who probably thought I was a stereotype. It doesn’t really answer your question because I don’t really have a clean answer for you. All I know is that every time I do something, I want to do it honestly, and completely. Whether I’m read as a stereotype or not is not my business.

LGBTQ rights are thankfully becoming an argument in both politics and media. How important is open visibility in 2018?
Very important, but we must not be careless with it. There’s people whose mortality depends on them being discreet. It can’t be the, ‘If you don’t come out of the closet, we will drag you out’. Those of us who are privileged enough to be visible, must be.

When I was a teenager I had no one who looked like me and was queer. I discovered James Baldwin when I was 19 and suddenly there I was, between those pages. In a book written by a writer who was long dead by then. It was great. But where were the people of my generation. Thankfully, 10 years later things are quite different.

Does the political or social climate of what’s happening around you ever influence your music?
One has to work very hard to not be influenced by their socio-political surroundings. It has to be quite a wilful and deliberate decision. Does staying true to your heritage and the journey you’ve travelled matter? Do you make that a focus ever in your work?
Of course: I am my heritage! I love my heritage and it’s infinite. It’s ancient and recent. It’s by blood and by art.

You spoke honestly about the death threats you received during your time on movie The Wound. Did these have a long term affect only day-to-day honesty about your sexuality?
I had no choice as the threats were public. The people who were making them were not concerned with secrecy or being found out, so how could I not be open and honest? The one thing that I felt they had to know was that I wasn’t afraid of them and that their bullying wouldn’t drown me. If anything, it would embolden me. I know those people. They’ve been calling me a faggot since I was four.

The other side of the coin is less combative. I’m not a robot so yes, when I leave my house I get paranoid.

How do we then get to a place where others don’t have to face homophobic hurdles like these?
I don’t know, it’s tricky. But I do think that education from a very young age is important.

And finally, in a world that often tries to limit those that blur queer lines and reach outside social constructs, where does your seeming limitless positivity come from?
A few places. It’s a fuck you to all those people who wish me ill. There’s the people who also love me and their support is weirdly unceasing.

I come from a family of ‘rebels’. People who do what the fuck they want, when they want. My great-grandfather gave up his place as a chief to go find love in Cape Town. He was not going to do things just because they had been done for however long a time.
And finally, it’s from the people who support my work.

The Wound – starring Nakhane – will be in cinemas from 27 April.