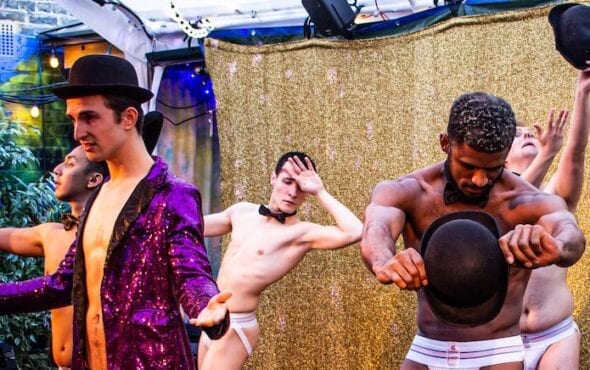 The off-Broadway staple has opened at the Garden Theatre in Vauxhall.

Naked Boys Singing! delivers exactly what it says on the tin. Over the course of an hour, six guys sing and dance their way through 15 musical numbers, and for the entirety of the show they are either scantily clad or – more often than not – completely naked. We did feel for them a bit – as the name suggests, the Garden Theatre is an outside space, and while the performance area is covered and heated, we weren’t exactly warm… and we were fully clothed. Credit where it’s due, the cast soldiered on to provide an entertaining show on a chilly autumnal evening.

There’s not an awful lot to sink your teeth into here aside from the music – it’s essentially just a sequence of songs – but the boys put on an enjoyable performance nonetheless. The show is bookended by whole group numbers, in-between which each singer is afforded one or two solo moments.

Naked Boys Singing! is not a show with any real depth – a song about beating meat is basically just one protracted and deeply unsubtle innuendo – so if a smart plot, witty dialogue and strong character development is what you’re after, you won’t find it here. But to judge it on that criteria would be to miss the point – this is a show that does exactly what it sets out to do.

It’s a little inconsistent and may not be the most polished production, but we all know it’s been a tricky year and sometimes it’s just nice to switch off and enjoy some light entertainment. Those after a cheeky musical revue will find plenty to enjoy here.