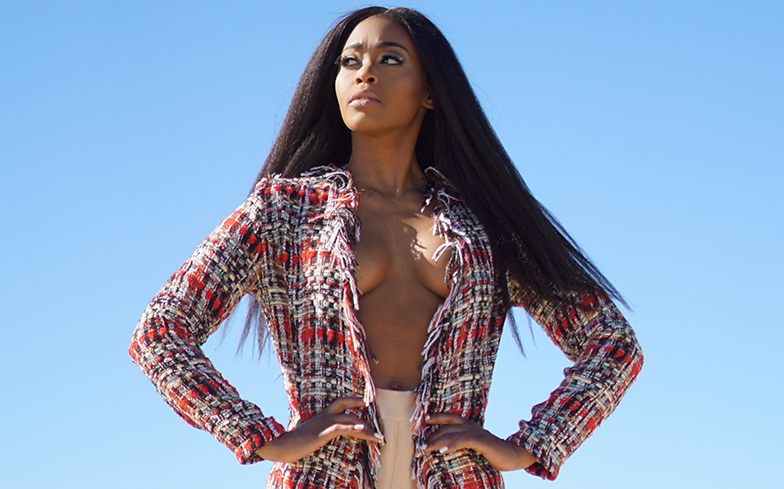 When critically-acclaimed TV series Black Lightning debuted at the beginning of 2018, it made headlines for multiple reasons. Not only did it feature a family of black superheroes, but it also introduced us to TV’s first ever black lesbian superhero: Anissa Pierce aka Thunder.

“I remember crying the first time I put my suit on, just knowing that I was about to be that representation that we’d never seen or had before,” actress Nafessa Williams tells us about landing the historic role – one which has provided an unapologetic-yet-normalised view of life and love as a gay woman in a way that’s rarely seen in mainstream media. With a third season confirmed, we spoke to Nafessa about being an ally to the LGBTQ community and why playing Thunder is her “dream” role.

Congratulations on Black Lightning being renewed for a third season! It must feel great to know it’s getting such a great response.
Yeah, it’s truly a blessing to know that what we set out to do is what we’re actually doing. I think as an artist, when you put out work you want to make sure that it’s effective, and it’s relatable, and I feel like we have those aspects with the show.

Playing the first black lesbian superhero on TV is a massive deal. Why do you think it’s so important that people get to see themselves represented in mainstream media?
Well, I think representation is important because when we watch TV or we go to the cinema, we want to see characters who look like us and who we’re able to relate to. I think that’s why we’ve been successful, especially with this character in particular. Before now, black teenage women have never seen themselves as lesbians on screen, and not just black women but all women. My love interest on the show [Grace Choi], there’s a whole fan base for her, and there are people who look like her who’ve never seen themselves celebrated and glorified in a loving way as a lesbian, so it’s something great for the culture, it’s something great for our generation. It’s beautiful to see, and it’s also beautiful the way we’ve normalised the idea. There wasn’t a coming out moment, it was just like, ‘Yeah, she’s a lesbian, and her family supports her’. I always hope families who are tuning in and watching are inspired to support their children the way Anissa’s parents support her. Were you nervous taking on a role that you knew would be such a huge moment?
As an actor, you always want to stretch yourself, and take on different roles, and experience different things, so I think I was more excited than anything. There was some pressure taking on the role in general, knowing that you’re taking on the role of being the first, but I knew that that our producers and our writers would do the characters justice, and for me playing a lesbian opposite a woman is no different than playing opposite a man – I just make sure that love is the foundation of the relationship. When you’re authentically telling that truth, it takes a lot of pressure off.

It’s also important for young girls and boys to see strong female characters on their screens…
Absolutely. We have three very strong leads, and it’s not just us, all the women who come into the show are very strong and dynamic, they’re very educated, they know exactly what they want, and they’re very fearless. As a woman and as an artist, you want to take on roles which highlight the strength of females, and our show does a great job with that. We’re really blessed, we really are.

For most people, being a superhero was the ultimate dream job when they were young. How does it feel getting to put on that costume and live out that fantasy on screen?
I tell people all the time, whether you’re an actor or not, there’s this fantasy of wanting to become a superhero, and for actors most of us have that on our list to check off. It’s such a beautiful and overwhelming experience. I remember crying the first time I put my suit on, just knowing that I was about to be that representation that we’d never seen or had before. So it was an honour, I felt really grateful to be chosen, and it was literally a dream come true.

What has the response been like from fans?
Oh man, it’s been really great, especially from the LGBTQ community, there’s an overwhelming support that I’ve been getting. I was at a convention and one young woman – she wasn’t even black, so this transcends race – she was about 16, she came up to me in tears and she said, ‘Thank you’, because after seeing Thunder she felt normal, and prior to seeing the show she didn’t feel normal being a lesbian. To me, that was the most rewarding response that I received. It must be incredible to know you’re having such an impact on viewers.
Yeah, and I gotta say, before I took on the job, I knew us being the first black superhero TV show would be dynamic, and you give over to the character and do everything to make it a great show, but you can never assume what the response is going to be, or plan or predict it, it’s just one of those things where you’ve gotta wait until the audience see the show. But it’s had such a great response, and we wouldn’t have a season three without the fans tuning in.

Have you had any negative feedback for the show including LGBTQ characters?
Yeah, but I have to say about 95% of the feedback has been really positive and uplifting. There’s been about 5% negative, but I ignore them. I’ve had some people say, ‘Why do you have to make this character a lesbian?’ But we’re really just paying homage to who the character was in the comic books. It’s not like we just woke up and said, ‘Ooh, let’s make her a lesbian’. But I don’t pay those responses much mind, because at the end of the day they still watch the show.

What message do you hope viewers take away from Black Lightning and your character?
I always want people to take away the idea to be exactly who you are, to be inspired to be authentically who you are, and to walk boldly. We see that with Anissa, she’s unapologetically who she is, and I hope that when people watch the show they’re inspired by that.

You can watch Black Lightning on Netflix in the UK.