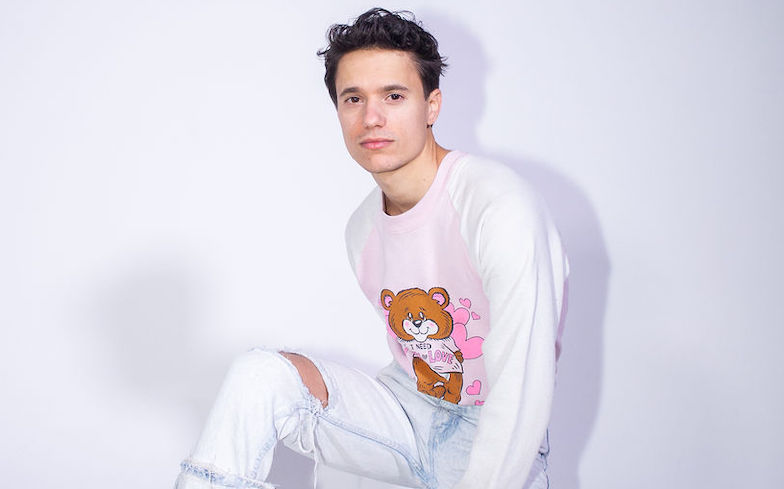 Myylo is an LGBTQ performer who isn’t afraid to – as cliché as it sounds – speak his mind, especially when it comes to representation within the music industry and breaking down stereotypes of masculinity.

The singer-songwriter – who hails from Nashville, Tennessee – tells Gay Times that he’s passionate about male artists expressing emotion in their music and queer artists using the correct pronouns, rather the use of ‘you’ in order to appeal to a wider audience.

“It was definitely something that when I was 19 or 20 that I was negotiating with myself, but as I put out more and more music, I think it’s important to be honest,” he explains. “I kind of want artists to just say it, to me it’s important to use ‘he’ and ‘him’ in songs.”

In celebration of the release of his whimsical pop anthem, Jonesing (out today on iTunes and streaming services), we caught up Myylo to discuss his music, the LGBTQ community and the disadvantages of streaming as a new artist.

When did you realise you wanted to be a musician?
I was always a musician because my parents had me in music classes as a young kid, but I was pretty much on a straight and narrow path in high school. I was just being a huge nerd and trying to get to college, but once I got to college, I was unenthused by all of it. I did an open mic and was walking back to my dorm and I was like, ‘Damn.’ It was this instantaneous thing when I was a freshman, and then I wanted to pursue music.

How would you describe your sound?
It’s hard! Sonically, mostly pop productions with classical guitar going on, and I play saxophone so there’s a lot of saxophone in stuff that I do. Lyrically, it’s pretty tongue-in-cheek, but inspired by singer-songwriters in country music and rap. I don’t know, it’s a melange of so many things because there are a lot of artists making music right now, we’re listening to everything. But pop music, if you had to put a label on it. Growing up, did you have any icons who inspired you?
I don’t know with my sound, but when I was growing up I was listening to a lot of songwriters like Sara Bareilles and Jason Mraz, they were the people I latched onto. I’m obsessed with Beyonce and everything that she does. A couple years ago I really got into country music so I started listening to Kacey Musgraces all the time and that really inspired my lyrics. Also a lot of Nicki Minaj and Chance the Rapper, he’s been a big influence on the sonic landscape, his whole musical collective. Even Jamila Woods, that whole Chicago scene inspires me sonically.

What about icons in the LGBTQ community?
I was lucky enough to grow up with YouTube, and my mom’s best friend is a lesbian, which I didn’t really put together until I was older… We all had YouTube growing up so it was easy to be like, ‘What’s going on with my emotions?’ Tyler Oakley was like the first person on YouTube that I saw and he was young like I was, so I was able to connect with him. And I used to watch 1 Girl 5 Gays all the time and Degrassi, which was one of the first shows where they had a teenage gay kid. I used to be like, ‘Oh, I’m a teenage gay kid too.’ Buffy was great too, Willow is the best witch of all time.

I love Buffy, and when it comes to witches, I loved Charmed.
Love Charmed! I’m obsessed with Charmed. Charmed was my first non-cartoon show where I was like, ‘What is this?’ Have you seen the new one? And I don’t think they don’t need to reboot Buffy. I feel like the whole monster of the week setup for a TV show is not too hot anymore…

Right? They only do about ten episodes now unlike Buffy and Charmed that had around 22 each season. Next question, completely unrelated: what’s the story behind your new single Jonesing?
Well, I’m a Jew, and I was on a trip to Israel called Birthright, where Jews can go for free. I was on a LGBTQ trip and we went to Tel Aviv Pride, and all that other Jewish stuff you do in Israel. And there was this guy on the trip, and we met on the trip but really hit it off on the plane ride back. We started facetiming all the time, he came here and I went there, and it started being this little thing. Jonesing was me trying to figure out those emotions of a long distance relationship with this particular person. At the time of writing it, I was like, ‘There is no way this will go anywhere. This won’t work.’ Classic long distance stuff.

What is your relationship with him like now?
We’re not really in each other’s lives anymore, which is natural. There’s no way to be in each other’s lives. It wasn’t too long of a thing, where I’m dying over it. It was one of those things where you really connect with someone and you’re like, ‘Wow, I really wish I could have the opportunity to explore this feeling.’ And you’re trying your best to make it work, but a bunch of other things get in the way. You can’t really make someone a part of your life when they’re not present.

You once said men aren’t allowed to express their emotions in music. Is it important for you to break down the stereotypes of society’s perception of masculinity in your songs?
Yeah. I think it’s the consequence of being someone who is an emotional man, that you end up confronting those social structures. If you’re gonna be open and honest about who you are and what you’ve been through, then you’re gonna end up tackling some of those things anyway. Like when I play live, I always try to invite the audience into my personal life, not only through songwriting but what I’m saying in-between the songs. I’m pretty upfront, without saying names, about who inspired the songs. I think people connect with that because we’re not allowed to have those conversations so openly between each other, y’know? Especially men. I think it’s cool whenever I see men being emotional, like Sam Smith and Troye Sivan, they’re also gay but I think they do a great job of being like, ‘This is how I feel, this is the story of my life and I hope you connect with it.’

For those who are unfamiliar with you, how would you identify?
I identify as gay, but it changes. I bounce back between gay and queer depending on the day. In practice or whatever, I’m a gay person, but the community I feel a part of is queer and trans, because I feel like our umbrella word is bigger than just being gay. I don’t know, politically and community wise I identify with a queer community, but as a person I identify as gay. Was it important for you to be out as gay from the start of your career?
Yeah, it was definitely something that when I was 19 or 20 that I was negotiating with myself, but as I put out more and more music, I think it’s important to be honest. Also, as a consumer, I love hearing songs by queer artists and people that I can identify with. I am thrown off by the constant use of the ‘you’ pronouns. I kind of want artists to just say it, to me it’s important to use ‘he’ and ‘him’ in songs. I don’t wanna ever, kind of like divorce myself from saying ‘him’ and ‘his’.

There’s still a lack of queer artists who refrain from using pronouns, as if they’re afraid of scaring away potential listeners.
Yeah, it’s disappointing. Those artists who use ‘you’ pronouns and are out have certainly paved the way for other people to choose ‘you’ versus ‘he’ and ‘him’. So at the end of the day, artists who are gonna come forward to use pronouns specific to their sexuality still owe a debt to these people who came first. Had they not made themselves more palatable to a general audience, we might not be able to push forward.

Your last EP was in 2017, can we expect another to follow or potentially an album?
Still figuring it out. I think I’m gonna collect all of the singles in an EP at the top of March. All of these singles are important to me, and the thinking behind it is more influenced by technology. On Spotify as an artist, you can highlight one song per release, so if I can release everything as a single, it’s more likely that the Spotify algorithm will help that song get more listeners. We’ll continue the momentum throughout 2019, releasing more singles and work towards another EP which will hopefully be out by the end of the year. So hoping for two more EPs!

It feels like artists are avoiding full-length albums lately.
They are, in a way. I think people who are true fans of artists want albums, like I want a Beyonce album, do you know what I mean? For the most part, it’s all the economics. If music is making less money, then I’m not able to make an album. If I’m only making, I don’t know the exact number, like a tenth percent of a stream, I’m not gonna afford to make an album so an EP or a single makes more sense. The money is coming from live performance, and I think what’s going to be an interesting trend is how artists negotiate the way we’re getting paid. So on Spotify, for instance, you’re only getting paid for the first 30 seconds of the song. But let’s say you have a three minute and 30 second song, and I have a one minute and 30 second song, and you listen to both of those, both of those people are going to make the same amount of money. So that technology and the money handed out per stream is going to influence the way we’re making music.

I’ve never heard that… Is that quite frustrating then?
I’m frustrated in general by the way art is valued in society. People are still going to make art regardless, but anyone can release music and make it from their bedroom. So there’s so many factors, and I think it’ll be interesting to see how it evolves.

It must be difficult, because obviously you want to make great art but make music at the same time…
Yeah. I think you have to compromise, which is fine, but to me, it’s an interesting question, ‘Okay, how does this influence the way I’m making art?’ For me, art is something I love to do, but it’s also something that I wanna be able to support myself on. I’m in, what I call the ‘baby artist’ phase, connecting with new fans and growing and releasing music and seeing who latches on. It’s interesting, I don’t know exactly how it’s going to influence me going forward, but it’s definitely something that I find fascinating.

Jonesing is now available on iTunes and streaming services. Listen below.