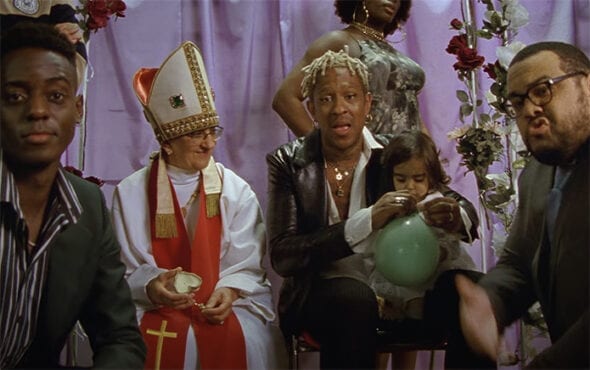 Mykki Blanco has signed to Transgressive Records and shared a new single and music video.

Speaking on the news song, Blanco opened up about the single in a statement: “With Free Ride I wanted to portray the very real situation of two humans being in love and creating a child without necessarily being the same sexuality, but a love of acceptance, the love created by creating a family and accepting wherever your lover falls on the spectrum. Pushing unexpected never before seen Queer narratives has always been central to the ideas around my music videos.”

The singer added: “Some of the most intimate moments and conversations I have ever shared were with my mother on long drives in the Southern countryside when I was a teenager.

“The music that soundtracked these memories on our daily journeys was the stuff of my mother’s generation. I would find myself daydreaming, reflecting and envisioning the kind of life I would like to create for myself. These memories and the music of Luther Vandross were the first inspirations behind the creation of my new song “Free Ride”.

The music video for Free Ride was produced by DIVISION, co-produced by FaltyDL and Hudson Mohawke.

Hannah Rosselin, director of the music video, described the creation of the video as one of her “most enjoyable shooting experiences“.

In a statement, Hannah said: “The collaboration with Mykki was based on trust and respect since day one. I met them by chance, and, as we like to say together, it had to happen. If I had to describe some of my intentions with this video, I think I would say that I wanted to picture my representation of the family experience: mixed, unstructured, messy, and yet full of love.

“I also aimed to break the traditional codes affiliated with a religious gathering like a christening, obviously to try to make it more fun. And finally, with humility and some derision, I wanted to overlap my idea of “the world from before” and hopefully the world that will come after.”

You can watch the music video for Free Ride here or below: