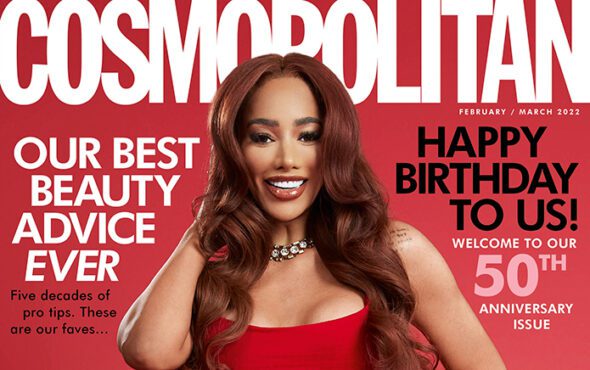 Munroe Bergdorf has made history as the first-ever out transgender woman to appear on the cover of Cosmopolitan UK.

The star celebrated the news on her Instagram, saying that she is “beyond excited” to have the honour.

In celebration of the magazine’s 50th anniversary, the activist sat down with the outlet to discuss her role as an activist and why trans representation is so important.

“I want people to interrogate what they have always taken as truth,” Munroe said of the change she would like to see in the world.

“Interrogate your bias. Interrogate everything you know. It’s such a freeing thing. But if we want to progress as a society, then we need to think about the way things could be.

“Equality doesn’t [currently] exist. We live within a system that thrives on inequality. We need to think about how we can build a system where all of us can win.”

The 2021 GAY TIMES Honour for British Community Trailblazer winner added that she has “learned a lot” during her career.

“Sometimes I feel frustrated being the only Black trans person, or the only trans person in the room,” she added. “I don’t want to be a token, the first and last – there needs to be a plan in place to incorporate that inclusion long-term.”

Stay tuned for the interview dropping online tomorrow. Don’t forget to pick up your copy of our 50th anniversary issue, on-sale from 21st Jan!

A lot has changed for young people since the 34-year-old was a teenager, much of which she thinks is positive.

She explained: “Now, so many young trans people have people they can look up to and they can see themselves in.

“[They can] think, ‘I may not want to be a Hollywood actress or an activist, but it’s a possibility for me and I can dream as big. I can do whatever I want to do, because they achieved what they wanted to achieve.’

“That’s something I’m really proud of – hopefully, somewhere, there’s a young trans girl looking at this cover thinking, ‘I can do it too and who I am is not going to hold me back.’”

Claire Hodgson, Editor-in-Chief of Cosmopolitan UK, said the activist “encapsulates what it means to be a Cosmopolitan cover star”.

She continued: “Whether it be finding a fulfilling career that pays fairly, developing happy and healthy relationships, or fighting for equality and respect, the topics Cosmopolitan has long championed are just as important now as they were in 1972.”

The 50th anniversary issue of Cosmopolitan UK is on sale from 21 January 2022.