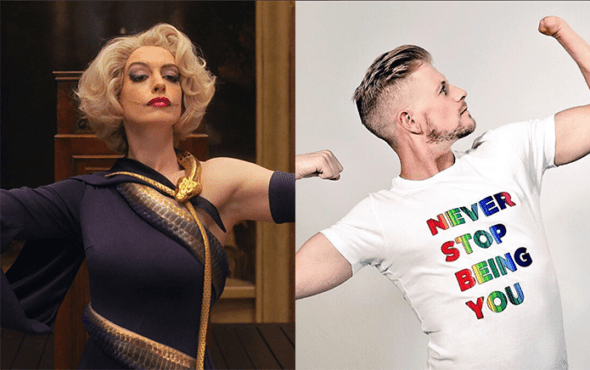 Former Mr Gay Universe, Paul Davies calls out The Witches for its depictions of physical disabilities.

In an interview with WalesOnline, Davies opened up about how the film can affect people with limb differences, stating: “It will have a huge impact for a lot of people on every level, especially those with a limb difference.”

He continued: “Seeing themselves portrayed as a villain, or something mean and nasty when you have no representation anyway is quite dangerous.”

In the film, Anne Hathaway’s character, The Grand High Witch is shown to have only three long fingers while in her witch form.

Anne Hathaway took Instagram to apologize for the film’s portrayal of the Grand High Witch with a caption and video from the nonprofit organization Lucky Fin Project.

“I have recently learned that many people with limb differences, especially children, are in pain because of the portrayal of the Grand High Witch in The Witches.

“As someone who really believes in inclusivity and really, really detests cruelty, I owe you all an apology for the pain caused. I am sorry. I did not connect limb difference with the GHW when the look of the character was brought to me; if I had, I assure you this never would have happened.”

The Devil Wears Prada actress concluded her post promising to do better and uses the NotAWitch hashtag that began to circulate in retaliation to the film.

“I particularly want to say I’m sorry to kids with limb differences: now that I know better I promise I’ll do better.

“And I owe a special apology to everyone who loves you as fiercely as I love my own kids: I’m sorry I let your family down,” she says.

Warner Bros studios also released an apology, saying: “We the filmmakers and Warner Bros. Pictures are deeply saddened to learn that our depiction of the fictional characters in The Witches could upset people with disabilities, and regret any offense caused.”

I am #NotAWitch I am stumpy the 1st ever one handed Mr Gay universe, Redcoat , welsh wonder , influencer, singer, actor,…