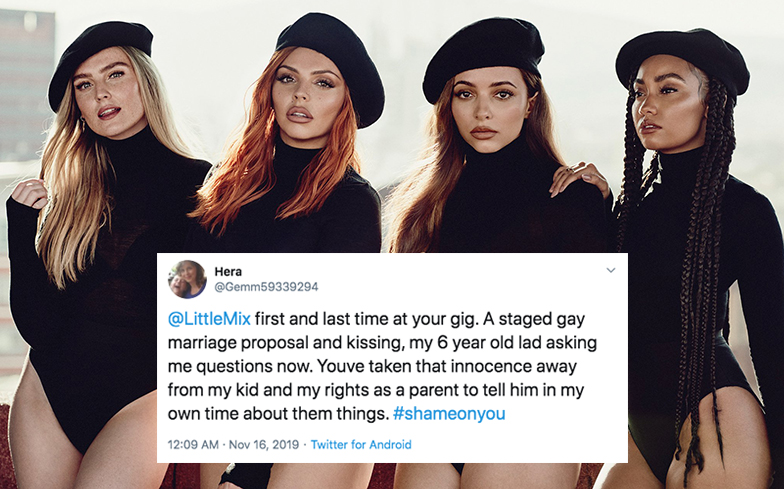 “It is you who should be feeling shame.”

During their Manchester concert on Friday 15 November, chart-topping girl group and longtime LGBTQ allies Little Mix paused their show to help a fan propose to his boyfriend in front of the entire arena.

The majority of fans loved the moment, with many praising Little Mix for being great LGBTQ allies and highlighting the community during their shows, but one concert-goer was unhappy with the sweet gesture.

“First and last time at your gig. A staged gay marriage proposal and kissing, my 6 year old lad asking me questions now,” wrote a frustrated mother on Twitter.

“You’ve taken that innocence away from my kid and my rights as a parent to tell him in my own time about them things. #shameonyou”

She later tweeted: “In the program didn’t say anything about a staged proposal where two men would be kissing for all to see or we wouldn’t have taken him. Went and paid to see the band perform nothing else.”

Unsurprisingly, the tweet didn’t go down with Little Mix fans, and thousands took to Twitter to voice their opposition to the mother’s homophobic views and show support for the LGBTQ community.

“If your child is six years old and he doesn’t know that sometimes men love other men (and women love other women), it is you who should be feeling shame. Do better,” wrote one Twitter user.

Another added: “I’ve never hidden my sexuality from my nieces. They treat my boyfriend like a second uncle – in fact I think [they] might prefer him to me? Their ‘innocence’ will be lost the day they discover homophobia exists.”

A third wrote: “I find it fascinating how some parents will go to great efforts to lie to their kids about the existence of Santa, the tooth fairy and the Easter bunny for years but can’t face explaining the very simple and normal concept of same sex love / marriage?”

Others pointed out the fact that Little Mix have a long history of supporting the LGBTQ community – like that time they displayed rainbow Pride flags on stage in Dubai, where homosexuality is illegal.

“Little Mix are known for being LGBT allies and UK moms love to get shocked when a gay proposal happens at one of their concerts like????” wrote one fan.

Tom, one half of the couple who got engaged at the Little Mix concert, tweeted: “This wasn’t staged and we’re very much engaged. I hope your son gets to experience real, unprejudiced love in his lifetime too.”