9 of the most shocking moments in American Horror Story history 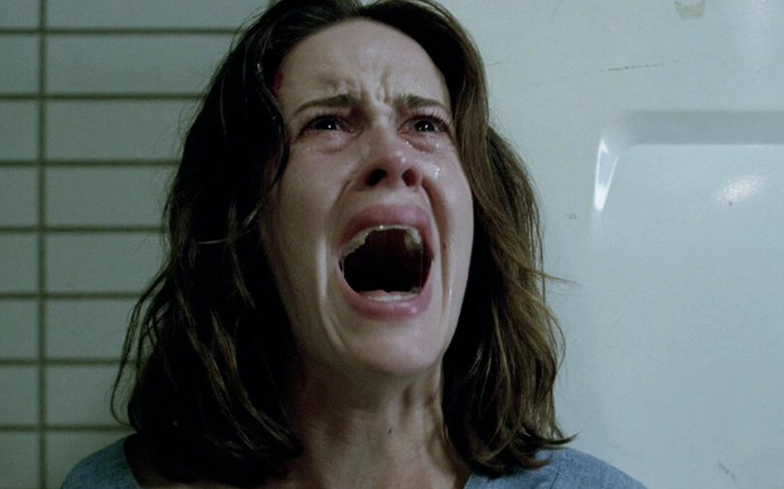 American Horror Story is one of the most shocking TV shows in history.

The popular anthology series has caused countless nightmares over the last decade, with co-creators Ryan Murphy and Brad Falchuck – as well as their team of twisted writers – somehow managing to outdo themselves every season.

From terrifying demons to gruesome deaths, these are the 9 moments from American Horror Story that had viewers hiding behind the sofa (or throwing up, depending on your tolerance for squeamish scenes).

As current reigning Supreme of the Salem descendants and Headmistress of Miss Robichaux’s Academy for Exceptional Young Ladies, Cordelia Goode has proven herself time and time again to be one of American Horror Story’s most bad-ass characters ever. But nothing compares to the time she literally stabbed herself in the eyes with pruning shears to get her visions back and save her girls. Powerful and gross in equal measure, it’s one of the most shocking scenes the show has provided.

1984’s villain Mr Jingles typically chose efficiency over creativity when killing off his victims – a severed head or a pit of spikes, for example – but Xavier (Cody Fern) wasn’t so lucky, as he was literally cooked in a giant oven. He survived, but immediately after had to mercy kill Bertie the chef and was left with severe burns all over his face and body, leaving his dreams of being on the cover of TV Guide dashed. So overall, not a great day.

Asylum is often regarded as the darkest (and best) season of American Horror Story, with plenty of shocking moments to choose from. But it was seeing nymphomaniac Shelley (Oscar-nominated Chloe Sevigny) tortured at the hands of Nazi war criminal Dr Arden (James Cromwell) and turned into a mutant known as a Rasper that really freaked viewers out. After being inflicted with experimental drugs and leg amputations, she was later dumped at a school and found by a terrified child. The sight of her crawling up those stairs will never leave our minds.

6. Elsa is mutilated in a snuff film (Freak Show, episode 4)

Cult differed from other season of American Horror Story by placing its theme firmly in reality, with much of its fear inspired by Trump’s presidency and the right-wing political movement. So it makes sense that its most horrific moment was also unnervingly realistic. To kill off the ‘weakest link’ in his cult R.J. (James Morosini), leader Kai Anderson (Evan Peters) forces everyone in the room to take part in an almost ritualistic murder, each firing a nail into his head to see how long it takes him to die. It’s the definition of taking things too far, and the scene felt unnecessarily long, leaving many viewers switching over.

Kathy Bates gave a career-high performance as historical figure Madame Delphine LaLaurie, the ultimate ‘love to hate’ character. To the public, she was a wealthy New Orleans socialite with a penchant for throwing elegant parties. But up in her attic of terror, she inflicted unimaginable torture on her black slaves and used their pancreases to create a beauty balm that she believed would make her look young enough to prevent her unfaithful husband from cheating on her. She later plays a game of ‘this little piggy’ on a gardener’s toes… with hedge clippers. These scenes were hard to watch, even by American Horror Story’s standards, especially because of the racism that accompanies the violence.

After being held against her will and enduring all kinds of horror including gay conversion ‘therapy’ at the hands of the sisters, Lana’s (Sarah Paulson) traumatic time at Briarcliff Manor finally seemed over when Dr Thredson (Zachary Quinto) helped her escape. It turned out, though, that her apparent saviour was actually the serial killer Bloody Face, and the worst was yet to come. After chaining Lana up in his basement, he revealed he killed and raped her girlfriend Wendy – whose dead body was lying in the middle of the room – and pulled out her teeth to attach to his Bloody Face mask. He then raped Lana, called her “mommy” and nursed off her, and then tried to kill her. Thankfully, Lana escaped, but after being returned to Briarcliff it emerged that she was pregnant with Thredson’s baby, and she attempted an abortion with a coat hanger. Unlike many of the show’s supernatural scares, this one shocked because of how real it felt.

Roanoke had one of the most genius setups in American Horror Story history, turning a reality TV series into a real-life horror. It also had some of the most gruesome scenes at the hands of the Polk family and the lost Roanoke Colony. But nothing comes close to the shocking deaths of three innocent young friends looking to document the Roanoke mystery in the season’s penultimate episode. Todd (Jacob Artist) had his throat slit by a Scathach-possessed Lee, but Sophie (Taissa Farmiga) and Milo (Jon Bass) weren’t allowed such a quick death – they were impaled on stakes and burned alive by the Roanoke Colony. Thanks to Go Pros worn by the aspiring filmmakers, viewers at home were given a first-person POV of their brutal murders. It’s the stuff of nightmares.

If there’s one scene that will be burned into the minds of American Horror Story fans forever, it’s this one. During the premiere episode of Hotel, the Addiction Demon made its first appearance, raping addict Gabriel (Max Greenfield) with a strap-on drill-bit dildo. Worse still, the horrific scene wasn’t just implied, it was played out in full for the viewer to see as Hypodermic Sally (Sarah Paulson) sat by and calmly watched, before demanding Gabriel tell her he loves her. Series co-creator Ryan Murphy described it as “the most disturbing scene” he’s ever filmed, and we have to agree. We all could have done without seeing this. Ever.