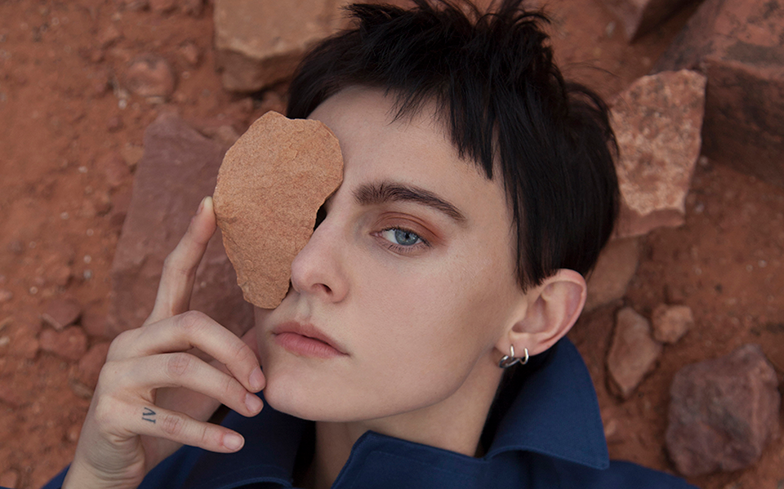 “I love people, and when that connection is there, I don’t even think about the sexuality of the person.”

Since the release of the aforementioned EP, 17 Hero, Morgan has received acclaim from critics for her lush vocal delivery and raw, understated songwriting skills, and has built a dedicated fanbase within the LGBTQ community.

We caught up with the singer/songwriter to discuss her highly-anticipated debut album, her love for American rapper Cardi B, and why she doesn’t feel the need to define her sexuality.

Hi Morgan! So, I love 17 Hero and I think New Regime is my favourite.
Oh! That’s a sleeper. That’s funny that it’s your favourite. I like it too. It connects well live, but for some reason, it’s just not the most popular. But that’s awesome, thank you!

How is work on your debut album coming along?
It’s been finished for quite a while, and it includes my EP and an additional big bunch of songs. I’m really excited about it, and it’s been my focus lately.

How many tracks can we expect?
I think it’s a total of 13.

These days, artists choose to release EPs instead of full-length albums, so I’m relieved!
I know! I was between doing that and an album, and really, it’s an additional eight songs so it could’ve been an EP if I took a song or two off. But, I just really love listening to a full album, and as an artist, I have such a specific story that I’m kind of communicating, and it just felt like it would feel more complete as an album. So it’s kind of a creative decision, and I hope it translates that way.

Will the sound be an evolution of 17 Hero?
It is. I think that it was a starting point, but I definitely think I’ve even grown in the past year or two, so I think you’ll hear that growth sonically. It definitely is an extension of that, and I think there’s a lot of new influences that you might hear. There’s some new energy in there, and I’m excited for people to hear.

Can you tell me about who you inspired you growing up?
People compare me all the time to people like Bowie. I guess it’s the mullet thing? I love Bowie, I think he’s really awesome. Prince is super cool. Oh god, I don’t know! I listened to a ton of Britney Spears, it’s really all over the board! Christina Aguilera…

You and Bowie have quite an androgynous look. How did you discover your androgyny?
It’s been sort of a natural process. I’ve always been kind of a tomboy, in the sense of, I’ve just always beat to my own drum. I’m originally blonde, believe it or not! When I was growing up, I had long blonde hair, and during college I was just wanting to do something fun and change it up and I dyed my hair really dark. I don’t know, I was just really bored of the long hair so I cut it into a bob, and it’s just evolved into a mullet situation. I just really get dressed and present myself for myself, whatever makes me feel the most confident. I guess that translates as more of an androgynous look, which I’m totally fine with.

How do you define your sexuality, if you’re comfortable speaking about it?
Yeah for sure. I think the way I view the world, and myself in general, I feel restrained when I put myself in a box or when someone else tries to put me in a box. And so, that’s kind of how I would define my sexuality. I think I see people’s souls more than anything else, so I wouldn’t put a specific label on myself. I love people, and when that connection is there, I don’t even think about the sexuality of the person.

When did you realise this about yourself?
I don’t really know! I think I started to find myself in college, and I think when you have time alone to explore, like all parts of yourself and your personality, I think that’s when I came into my own. It’s been a journey. I’m learning something new about myself every single day, so that’s why I hate labels. I feel like I’m always changing and evolving. Yeah, it’s just been a journey. I think right now, it’s an amazing time because people each and every day become more and more open minded. It almost doesn’t matter, and I think for a while, I’m sure people felt a certain sense of safety in having a label and having a certain, specific community to lean on. So, nothing against labels. I think there’s just such a spectrum for me, at least, and so I just kind of leave it there.

When writing your songs, how do you balance it being personal to you, but then relatable to a wider audience?
I think something I strive to do is be super honest, in all of the stories that I tell. I use songwriting as therapy, and my diary, so what people are hearing are my exact feelings. I try to, of course, make it relatable to everybody and sort of pick a broader topic that I feel like is not secluding anybody.

What do you think are the challenges LGBTQ artists still face in the industry?
I’m not really sure. There’s still, unfortunately, a lot of people in the world that… Well, I live in New York City, and it’s probably one of the most accepting, open-minded places in the world, and so I sometimes feel like I’m spoiled and also a little bit unaware, in the way the rest of the world sees things still. As I’ve been travelling, especially around the US this year, touring, I’ve definitely played in places that don’t have that same energy. I think, unfortunately, it’s just not all quite there yet. I do see a really positive growth in people, and even just in the people around me, I think just me being myself has opened the minds of even family and friends of mine. The more people are just honest with their sexuality, the more it’s just going to become not even a thing that’s looked as weird. I think when people see, first-hand, two people loving each other, it erases the thoughts and pre-conceived notions that they may have. I hope in my lifetime, it keeps improving in that regard.

You said you’ve opened the minds of people around you. Would you say your coming out experience was quite positive then?
Yeah. I’m lucky to have an amazing family and friends around me, and so I feel really grateful for that, but I know that it’s not as easy for quite a lot of other people. I do think though, at the end of the day, even if not everyone agrees with the way that you choose to live your life, I think people will surprise you. Even the people that you think would never understand or could never accept it. Those have been the people that have been most supportive to me, in my life. At the end of the day, you just have to be true to what makes you happy, because it’s not worth trying to please anyone. If someone loves you, they’re gonna stick by you no matter what.

What kind of feedback have you had from fans so far?
It’s interesting. I’ve never really had any fan question my sexuality or ask me. It’s always been this unspoken understanding when I meet people, like on tour. But I think the general theme of people relating and appreciating my honesty are why people have expressed their gratitude, if that makes sense? More so, just me being myself, and being unapologetic is what I’ve really had a response to.

How important is it for fans to have visible queer role models?
It’s really important, especially like nowadays, even more so than when I was growing up, with social media and the internet being such a huge part of life… I didn’t have internet until I was in high school, and I didn’t have Instagram until I was in college, so it’s just a different world. The last ten years have shifted so much, so especially for young people, having really authentic, honest people to look up to in a superficial world is extremely important.

You’ve been touring with Goldfrapp, which must be amazing.
It’s just such a good vibe. Even people who don’t even know who they are, you put on a song and they’re like, ‘Oh yeah! I’ve heard that!’ I actually toured with them before I even released my EP, and it was a pretty interesting experience because I went from never performing before to performing with them, and they’re playing rooms of like, 1500+ people. That was definitely a big jump for me. It was 0 to 100 real quick, y’know what I mean? Alison is amazing. Watching her each night perform was so cool. She’s such a pro at what she does, and she’s like 50-years-old, I don’t know she gets up there and dances like that. She’s also super sweet, so it was a great experience for me.

You recently covered Cardi B’s song Thru Your Phone? How did this come about?
I knew that there was gonna be a bit of time between music that’s out now, and my upcoming album. And so, I just really wanted to fill that gap with some content to keep people engaged. So I was like, ‘I think I want to do a cover’. And I was kind of trying to figure out what would make sense to connect with people, especially in my demographic without it be an artist that I sound like, or might be in the exact same genre as me. I’m not trying to compete with people similar to me, I’m just trying to stand on my own, and I love Cardi B. I’ve been following her journey for a while, and she’s just so funny, and definitely says whatever’s on her mind, which can sometimes be offensive and also extremely inspiring.

She’s very endearing.
Yeah. I don’t know her personally at all, but I just admire her work and who she is as a person. I was listening to her album on repeat for a while, and that song just really stood out to me. I think it’s really well written, and the chorus really stood out to me and thought it would fit my voice really well. I had no idea how I would tackle the verses because she really raps them, and I’m not a rapper, and I’m not trying to be!

What else can we expect from you this year?
That’s a good question. This summer, I’m doing a bunch of festivals and radio events, so that’s the focus. I’m not sure! It’s hard because my schedule is always changing. I’ll be playing at Lollapalooza in Chicago, and that’s a big one. I’ve never really done festivals before, so I’m really excited!