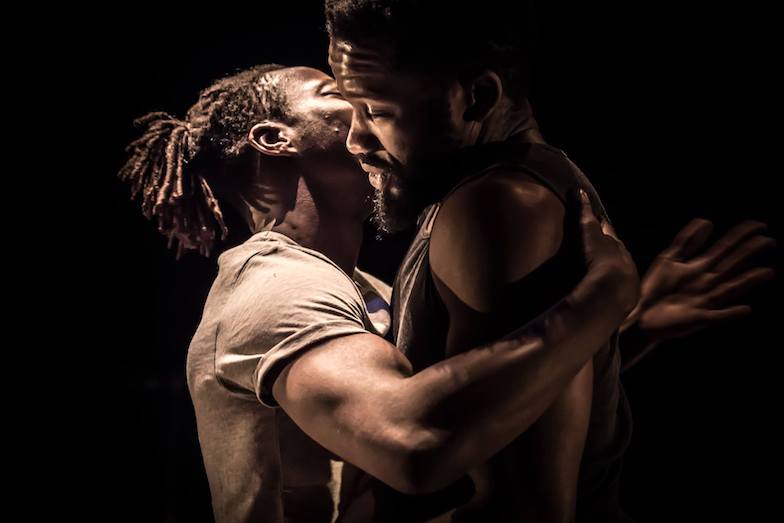 The writer of Academy Award-winning LGBTQ movie Moonlight brings the bond of two men to the stage in a dark and touching piece about two African-American brothers reunited.

Allowing you to remain fixated on what’s happening through the brilliant storytelling, there’s a tension in the Young Vic that feels exciting. It’s a tension that’s regularly pierced by beaming red lighting strips placed across much of the action that display a divide. Either for good or bad, the separation shows two sides of a moment.

Featuring Yoruba mythology and live music – by Manuel Pinheiro – all action is housed inside white hand-drawn circular markings. This exploration of love, adolescence, masculinity and unity between two brothers and one of their lovers from a recently ended prison sentence, The Brothers Size tracks them as life is attempted to be brought back together. An easy symbol to that of the ring of life.

Jonathan Ajayi and Sope Dirisu battle a broken brotherly bond and they push to secure a sense of normality in both their lives as brothers Oshoosi and Ogun Henri Size. Clearly a relationship that’s seemingly clear above surface but facing many difficulties underneath, there’s an enjoyable depth to both their performances that drag you deeper into this tale. Ogun Henri Size’s former cell mate Elegba (Anthony Welsh) of equal success.

And, much in the way Moonlight did so well, The Brothers Size notes same-sex love without direct labels. It’s the love and a connection between two individuals that’s allowed to take centre stage – rather than their binary confines.

Bijan Sheibani directs this production impeccably and presents so many questions along the way. There’s a real sense of an open dialogue here through choices that get you comparing feelings to your life – particularly the powers of a bond between two individuals.