Monét X Change to Azealia Banks: “I am smarter than you, and I will take you down if I have to” 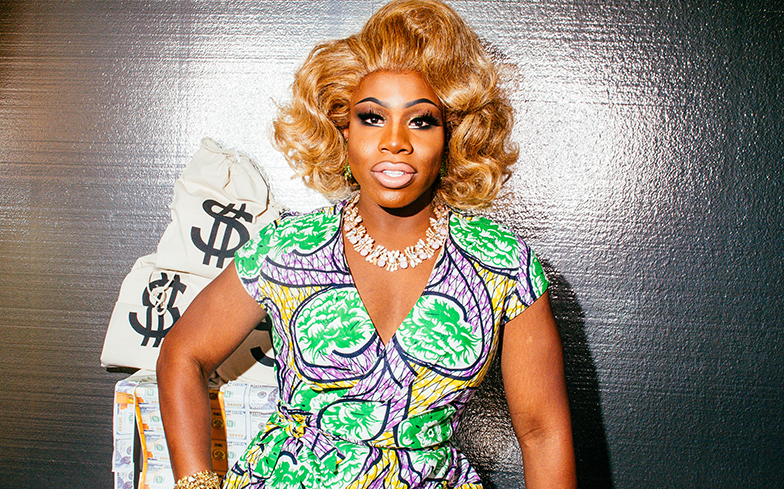 Monét spills the T on her elimination, her feud with Azealia Banks, and whether she’ll appear on All Stars 4…

Best known on the show for her fierce lip-sync abilities, sponge obsession, and affinity for pussycat wigs, NYC queen Monét X Change came into the Drag Race werk room this season and vowed to “sweep up the competition” – broom in hand. She may have not won the title of America’s Next Drag Superstar – leaving in sixth place – but Monét cemented her legacy as one of RuPaul’s most charismatic and likeable queens ever.

Since her controversial elimination – which saw Kameron Michaels defeat the performer in a killer lip-sync to Lizzo’s Good As Hell – Monét has been declared the “robbed queen” of Drag Race season 10. But that’s a title Monét doesn’t mind. “I’ve realised as a Drag Race girl, something that’s better – or more dope than winning – is fans saying that you were ‘robbed’,” she says. “It really warms my heart that they feel so strongly about my talent on the show.”

Well don’t worry hunties, because Monét is here – H-E-R-E! – for a future appearance on All Stars to finally snatch those challenge wins. And like legendary Drag Race alumni before her, she’s launched an assault on the charts with the Bob the Drag Queen assisted banger, Soak It Up. This week, Gay Times caught up with the fan-favourite performer to discuss her final lip-sync, that mysterious note left for Mayhem Miller, and why she’s not worried about her feud with Azealia Banks…

Do you think you won the lip-sync between you and Kameron?
I abso-fucking-lutely did! Let me tell you something, it’s really easy to go into a lip-sync and do your standard ‘I’m gonna do a cartwheel here, I’m gonna do a split here’, but my style of drag, my style of lip-syncing is fun. Make it fun, make it different, make it stand out. Obviously, I’m not gonna play down anyone who feels comfortable doing their two-bag of tricks, but it makes the lip-sync more fun if you do things the audience isn’t expecting, so they’re thoroughly entertained. Did you have anything special planned if you lip-synced for the crown?
Oh absolutely girl! Let me tell you something, Sasha Velour has changed the motherfucking game, lip-syncing for the crown. Alright? She shut that shit down. Now, lip-syncing for the crown, what are you gonna do to top fucking roses coming out of every orifice and every crevice of your body? It truly is one of the most iconic moments of Drag Race. So I’m sure in this season, Sasha’s season, and the season hereafter, the question is gonna be, ‘How are you gonna top the year before?’

Care to share what you had planned?
No, I’m not gonna tell you girl! If Mama Ru gives me a call, and I get on some type of All Stars season, I’m gonna gag you with my tricks. But I’m not gonna tell you, just in case I do end up lip-syncing for the crown in some capacity in the near future.

So, that’s a definite yes to All Stars?
I would love to! Listen, I fucking love being on TV. I love talking, and I would jump at the chance to be on Drag Race again.

What would you do differently?
The judges made it very clear that they want me to wear more glamorous hair, whatever that means. Even though I think short hair is pretty glamorous. So I would definitely try to do that, and up the glam a little bit to make Michelle Visage crack a smile once or twice.

When can we expect your own line of pussycat wigs?
Oh girl, listen! They are coming to a Target near you. I know you don’t have it, but I’ll launch it at Target and Primark just for you guys.

Would you prefer to win the title of America’s Next Drag Superstar, or be a fan-favourite?
Y’know, that’s a tricky question because what I’ve realised as a Drag Race girl, is something that’s better – or more dope – than winning is fans saying that you were ‘robbed’. The fans thinking that I had what it takes to go all the way, and to think I was snatched and deprived of achieving that goal is really cool. It really warms my heart that they feel so strongly about my talent on the show. Are there any challenges you think you should’ve won?
Oh girl, lemme say something. The list goes on! There were many challenges I think I should’ve won. I felt I did very strong in Snatch Game, my Maya Angelou was really strong. I felt very strong about the Cher challenge, I really enjoy how I performed in that. I also felt strongly about Breastworld, and it’s funny because I got critiqued on my runway when Asia had the exact same runway. And she got the win instead. So I did feel like I should’ve won those three.

What was your experience with RuPaul like?
I have to say, I fucking love RuPaul. Yeah, we’re not on set like having a kiki and fucking have tea with Ru, but there are moments where she looks over and says ‘Monét, I love your shoes’, and little stuff like that, which is heartwarming. Also, Ru lets loose on set, and it’s really fun to see, especially for someone who is such a gay icon, and someone you think of as being so rigid and so straight. To see him let loose and cursing up a storm was great. I fucking love RuPaul.

Yeah, I feel like Ru’s been much more hilarious and crazy this season.
You know what? I think it’s because Monét X Change was there.

On the show, Eureka and The Vixen had a massive feud. Was it fairly portrayed compared to what you experienced?
People have in their minds that it’s this scripted thing, and they’re telling people to have these reactions, but no girl. That was honestly, really and truly what happened. Eureka and The Vixen were going through it at certain times, and yeah, they never really resolved it off camera. Literally, everything you see is what happened.

There was also a bit of off-screen drama with Mayhem Miller, and a hateful note she received…
Yeah, this weird note! Mayhem said she found this note, and went around to everyone asking them who did it. But Mayhem also had a few cocktails in her from Untucked, so I feel like the bitch might’ve been hallucinating! Yeah, she saw this mysterious letter in her station and she swore that someone wrote it about her [laughs]. What I think it was, I think Mayhem got drunk and she wrote that shit herself. She just fucking left it on her station, meant to give it to somebody else, and she forgot, and now she thinks somebody is out to get her. She’s so funny.

There were so many great queens of colour on this season, yet the finale has only one black queen. Do you have any opinions on this?
No, I really don’t. It’s just the luck of the draw. I don’t think it has anything to do with RuPaul’s Drag Race or the show, as a whole. I think it’s worth acknowledging that RuPaul’s Drag Race is one of the most culturally diverse reality competition shows ever. Like you said, there were seven queens of colour this season. The five black girls, and Yuhua and Kalorie. We were a pretty diverse cast, and I don’t think there’s been any shadiness with who ended up in the finale. Like I said, it’s the luck of the draw and they just didn’t feel like I did well, so that’s why I went home. Monique didn’t know the words, and that’s why she went home.

You had a Twitter spat with Azealia Banks last week. What was it about the situation that made you wanna speak up?
Well you know, she posted a thing being very nasty, saying how drag queens weren’t allowed to use her music anymore, and she’s coming at a large demographic of the LGBTQ community. I think it’s worth noting that our community has supported Azealia Banks and all her shenanigans and all the other shit that she’s said over the years. She really put us down. To come for us, a segment of people who have helped spread the word about Azealia Banks, and putting her music in the clubs, in our mixes, and for us to still support her after the things she said, it rubbed me the wrong way. I just wanted my fans and supporters to know that if you come to a Monét X Change show expecting to hear 212, Chasing Time, bippity boppity boo, I’m not gonna do it. She felt strongly about that, and she responded, and so I had to respond as well.

What did you think of her response?
Oh girl, it was nonsense. It was like fucking elementary read. I’m like, ‘Girl, I am a Brooklyn educated woman of colour, and I am smarter than you, and I will take you down if I have to’.