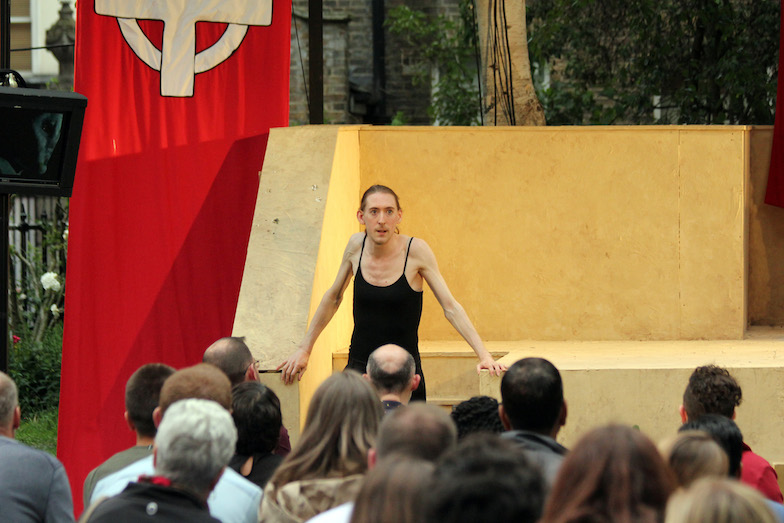 Directed by Daniel Winder, this new interpretation of one of the most performed plays of all time unfolds in and around St Paul’s Church in Covent Garden. It’s a unique setting which sometimes works well – watching the graveyard scene take place in an actual graveyard is surprisingly effective. Other times it’s less successful, however – particularly due to the stop-start nature of the action as the audience shuffles slowly from one location to another. Background noise in certain locations also meant some of the lines were difficult to hear.

Jenet La Lacheur heads up a relatively small cast, most of whom take on multiple roles. We found the acting to be something of a mixed bag – Jenet’s performance was generally strong, presenting a curiously unhinged young prince, bringing an intriguing gender fluidity to the role (my lord to some, my lady to others). Paula James also impressed as Polonius, but other performances were considerably less stellar. Additionally, a number of the actors struggled with diction and clarity, especially in the acoustically-challenging space of the church itself.

For every smart decision in this production of Hamlet there seemed to be an equally questionable one. The reinterpretation of this as some sort of fascist surveillance state, in a setting full of CCTV, propaganda and banners, worked reasonably well; however the inclusion of a bizarre interpretive dance sequence was undoubtedly not a high point. We appreciate that it’s difficult to find a new twist to Hamlet given just how many times it’s been performed and interpreted, but many aspects felt gimmicky and unnecessary.

There were numerous elements of this Hamlet that worked, but also plenty that didn’t. It was disappointing as this modern adaptation, which explores gender, identity and meaning, had real potential to breathe new life into the play. This is a show full of brave, bold and clever ideas, but being marred by a number of performance and production issues resulted in only a partial success.