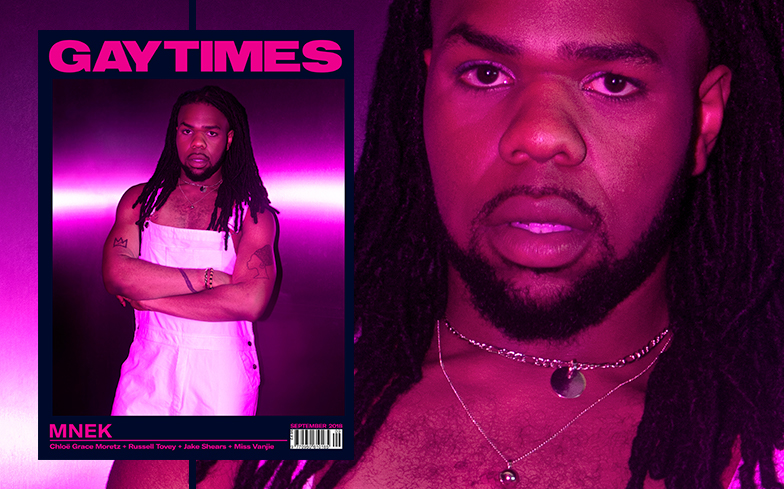 September will mark the month MNEK has waited his whole career for: the release of his long-awaited debut album Language.

To celebrate the momentous occasion, the British singer-songwriter appears on the cover of Gay Times for our September issue, speaking about the success stories and challenges he’s faced to get to this moment.

MNEK rightly points out that his impending debut album is a previously untrodden path in the world of pop. There is no template for what he is doing.

The 23-year-old is one of the only artists in the pop game who is both openly gay and black, while serving bops o’clock anthems for a Top 40 audience.

“When people are saying all this #20GayTeen stuff, it’s really great and empowering, but I am one of the very few black people there,” MNEK tells us. “It’s great to hold that flag and be like, ‘Yass! Werk!’ But I shouldn’t be the only one.

“I think the public’s perception of ‘gay being okay’ is Olly Alexander. Olly’s my girl – I love him – so it’s awesome that people see him, and they see someone who’s so comfortable in himself.

“But I think even he would say that the lack of diversity and the lack of variety in that idea of what ‘gay being okay’ is, is alarming, disturbing, and discouraging,” MNEK adds.

“It’s the world we live in. I’m not a politician, I’m not an activist, but my activism is my music. The best I can do is help normalise the conversation via these videos and via my music and via this Gay Times cover.

“I’ll get some shit comments on the way, so I’ll just have to bite it and deal with it. That’s what comes with doing something that people aren’t familiar with, because society hasn’t told them that it’s familiar or correct.”

Elsewhere in the cover interview, MNEK opens about about some embarrassing dating experiences, why Tongue was such a moment for queer people of colour, and how his new album Language is a force for positive change.

The star is also joined by his dancing troupe The KiKi – consisting of Busola Peters, Daron Gifty, Kieran D-W and Randall Watson – for our slumber party-themed photoshoot.

MNEK’s new album Language – which includes his songs Tongue, Colour, Crazy World and Paradise – will be released on 7 September.

The star will head out on a headline tour of the UK later this year, playing shows in Birmingham, Manchester and London in October.