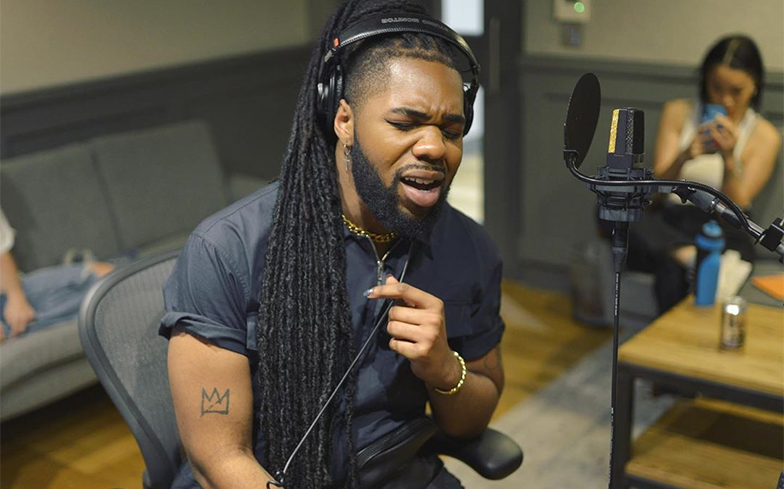 With songwriting and production credits for A-list artists like Madonna, Kylie Minogue, Little Mix, Christina Aguilera and even Beyoncé under his belt – as well as his own incredible studio album – MNEK knows what it takes to write a great song.

We caught up with him to find out why events like this are so important for the LGBTQ community, whether the music industry does enough to help queer artists succeed, and reflect on his debut album Language one year since its release.

Why do you think a songwriting camp like this is such an important thing to have?
It’s extremely important because we are a minority, and it’s great to create spaces where minorities feel safe, and they can be their true selves, and they can work to their best ability. But it’s more so about having fun. I really did think it would just be fun to have all of us together, split up, switched around, working with people we probably haven’t worked with before, and channeling new sides of ourselves. Warner Chappell were so nice to let me use their studios, Pride In Music have been a great support, and this is the first of many I’d like to do, every Pride. I want to continue to find new LGBTQ writers, producers and creators and making this camp a great thing, and a safe space.

It’s nice to hear that you’re having fun with it. When it comes to Pride and LGBTQ gatherings, it can feel like there’s a pressure to always be political or make a statement…
It doesn’t have to be an activist moment every day, because that’s not where my head is at all the time. My thinking was that it’ll be fun first of all, but on top of that it’s also a serious thing. We’ve all been in all-straight rooms where we’ve felt like we can’t say the things we really want to say, or make the songs we want to make, and this is an opportunity to do that. Has that been your experience in the music industry, that every time you go to record it has been mostly straight people?
Yeah, and that’s okay – hey, I’ve made a lot of money that way – but at the same time, there’s so many of us around, why does it have to be one of us in every straight room? Why can’t it be all of us together? So many songs come from conversation, and when you come from a very mutual ground with someone, a great song can come out of that. So that’s another factor in this.

Is there anyone here you’re particularly excited to work with?
I worked with Rina [Sawayama] which was really cool, I really like her and I’ve been wanting to work with her for a really long time, so I’m glad it was something like this that yielded our first session. Obviously there are people here I know, there’s so much great talent that I rate, and that was really the whole point. There was an interviewer before who asked, ‘How do you feel about giving these songwriters a chance, and giving them an opportunity?’ As if I’m some, like, svengali of gay writers. It’s really not that. I rate everyone here, and I know that everyone here is capable of doing it by themselves if they wanted to, but that’s not the point. The point is for us all to come together, make great music, and enjoy each other’s company. And this is just the first of it – hopefully at next year’s one there’ll be more people.

Aside from an event like this, do you feel like the music industry does enough to help encourage and nurture queer artists?
Sometimes they don’t know what to do, and sometimes we’ve just got to do it ourselves and figure it out. I have Virgin EMI, they’ve been a great label for me, but there are a lot of fights and conversations that a label aren’t gonna do for me, and the same goes for management. I have to be my own person, at the end of the day, because its my personal struggle. I don’t want to put the blame on labels, because that’s the layman idea that it’s always the labels fault, but really everyone’s struggle is different, and everyone’s view on gay is different.

It does feel like a lot of great songwriters are LGBTQ, or different from the mainstream in some way. Why do you think queer people make such good songwriters?
We have a certain lack of privilege that yields inspiration from the strangest places. When you don’t have that privilege, you’re just being seen as an Average Joe, and when you add that longing to be understood, I think that’s another thing as well that really helps with the songwriting process for queer or ‘other’ people. In terms of mainstream music, if you look at the charts, do you think there is enough representation for queer people?
Maybe not, but that’s the charts, and that’s what the public are buying. I mean, there’s Sam Smith, there’s Olly Alexander, there are some people. If that’s the representation you want to have, cool, they’re talented, and that’s sick. But someone like me isn’t gonna be in the Top 40 right now.

Do you think that’s ever going to change?
I don’t know. Let’s find out. The rest is still Unwritten… Natasha Bedingfield, brackets 2004.

It’s been a year since your debut album Language came out. Looking back, how do you feel about that whole journey?
I’m still really proud of the album. It was such a transitional time, I’d been doing it for 10 years and that was my debut album, and maybe it wasn’t the big blockbuster success that I wanted it to be, or that I envisioned it to be, but I’m really proud of what I’ve been able to achieve and do with it. I was able to tour America with it, and it really put my name out there as an album artist. I’ve received messages from so many people who the album has really helped, and it adds new purpose to my career. I was writing songs for other people for so long that I never really saw what my music was doing from a cultural point of view. Never Forget You, love it, really big song, everyone relates to it, that’s great, we all got paid really well from it, but I feel like I appreciated the success that I had with Language more, as relative as it was. It meant more because it was people like myself that I was helping, it wasn’t everyone. Sometimes it isn’t about everyone, it’s about people who really care. The album cover still feels groundbreaking, in a way, to show that intimacy between two men. Anyone who listens to your music will see that image, and has to take that image in, whether they like it or not.
The thing I loved about that album cover is that my label were so supportive of it. We were sat in this pub in Angel – me, my creative at the label, Charlotte Rutherford, and my stylist – and we were thinking of all these images that we could use for a cover. Initially it was going to be me with these gloves that said ‘Language’ with me using my hands. So Charlotte made these references of all the ways I could place my hands. There was one picture of Liza Minelli being held by her mum, and I looked at the picture and I just zoomed into the picture like, ‘How sick would it be if that was me in there, and there were these hands, and it was skin, and it was two black men?’ And as soon as I said that everyone was like, ‘Throw everything else away, that is the album cover’. It was great, because we knew what the shot was as soon as we did it. I’m excited for the next album, and to constantly spark conversation.

Can you tell us anything about the next album?
I don’t know what to do! This is my time to figure that out. But I’m enjoying having things like this where I’m creating and I’m around people that I like and who are really talented.