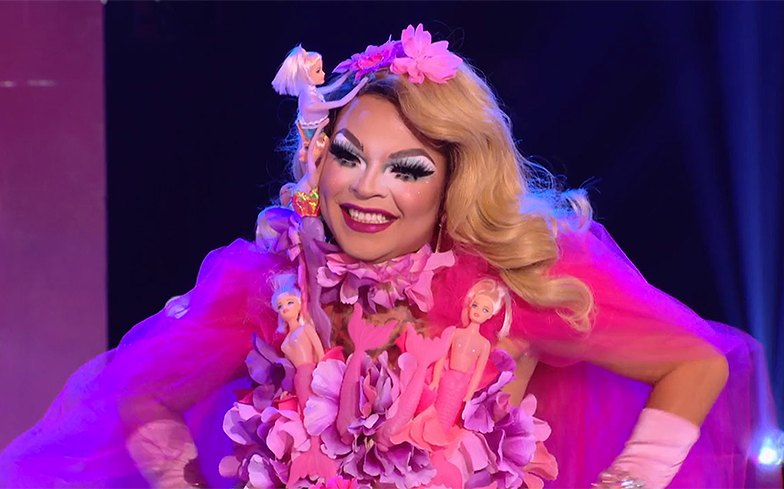 And we’ve got the video of him doing the impression…

Besides Shangela Laquifa Wadley, no other first-out queen on RuPaul’s Drag Race has ever has as much impact as Vanessa “Miss Vanjie” Mateo.

Her now-iconic/groundbreaking/revolutionary exit from the competition led to the queen becoming a viral sensation, spawning several hilarious, gag-worthy memes.

Honey, even Mama Ru joined in on the fun! Remember when she wore a Miss Vanjie necklace on Time 100’s Gala Red Carpet?

British actor, former Spider-Man star, and secret Drag Race superfan, Andrew Garfield, has now shared his admiration for the queen during an interview with Paul Wontorek at www.broadway.com.

“I was so disappointed to see Miss Vanjie go home – as everyone was,” he admitted. “And that exit is like one of the iconic moments, I believe, of Drag Race history.” (Did you spot any lies tho?)

Regarding her backwards sashay from the main stage, Andrew joked: “What the hell was that? Were you taken over by a divine entity? It’s hypnotized the culture!

The Tony nominee then went on to deliver his own rendition of that iconic moment. “Vaaaanjie…”


Earlier this year, Garfield said he would be ‘open’ to having a same-sex experience.

The actor – who is currently starring in AIDS drama Angels In America on Broadway – spoke to Out magazine about his sexual identity.

“Up until this point I’ve only been sexually attracted to women,” he said. “My stance toward life, though, is that I always try to surrender to the mystery of not being in charge.

“I think most people – we’re intrinsically trying to control our experience here, and manage it, and put walls around what we are and who we are. I want to know as much of the garden as possible before I pass – I have an openness to any impulses that may arise within me at any time.”

Andrew did, however, go on to confirm that he identifies as heterosexual.

“If I were to identify, I would identify as heterosexual,” he continued, “and being someone who identifies as that way, and who’s taking on this seminal role [in Angels In America], my scariest thought was, ‘Am I allowed to do this?’”

His remarks act as a continuation of last year’s controversy, where he was accused of ‘gay baiting’ after referring to himself as “a gay man without the physical act” because of his love for queer culture like Drag Race.

Addressing those comments once again in his interview with Out, he explained: “I think part of what I was trying to say was about inclusion, and about that openness to my impulses.”