2019 is the year of Miss Benny, our new favourite queer pop star 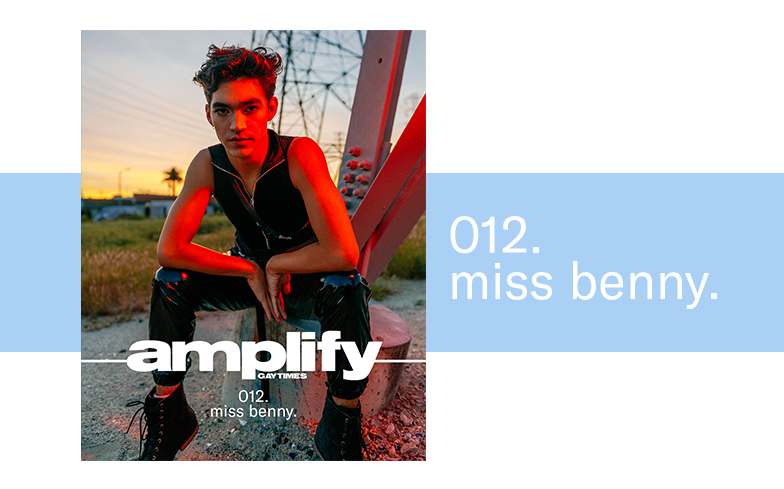 We’re only four months into the year, yet Miss Benny has already claimed 2019 as his own.

The 20-year-old actor, singer-songwriter, YouTuber and self-described “eyebrow activist” debuted in the entertainment industry nine years ago, but it feels like he’s – as cliché as it is to say, but we’re gonna do it anyway – officially arrived, and honey, he’s taking no prisoners (especially those with bad brows). Earlier this year, the star – real name Ben J. Pierce – launched a full assault on the charts with glittery dance-pop anthem Rendezvous, the video of which provided a massive ‘FUCK YOU’ to gender norms and heteronormative culture. The critically-acclaimed bop was succeeded earlier this month by Every Boy, a mid-tempo synthpop number that sees Ben express his desire to kiss every guy in the world. A breath? Of fresh air? Abso-fucking-lutely. Growing up, Ben – like most of us queers – didn’t have someone like his current self to look up to, someone who embraced their sexuality without fear of rejection, someone who subverted perceptions of a male popstar… someone who used male pronouns in their songs. Now, Ben is ready to be the openly-gay, femme-presenting performer mainstream media have had trouble embracing. “I don’t personally fault anyone for how they decide to present their music and the pronouns they use, but it’s very important to me,” Ben explains of his song crafting process. “It’s hard to write a song about kissing every boy in the world without actually saying the word ‘boy’! I want to make the music that I really wanted to listen to when I was living in Texas. I’m sure you understand, and I’m sure a lot of queer people understand, it’s sometimes hard to listen to music and have to constantly shift meaning to make them for yourself.” Despite his unabashed confidence, it took a while for Ben to get to this point. Texas is, well… not receptive to the LGBTQ community, to say the least. There are currently no hate crime laws in place for those who are targeted for their gender identity or expression, and only certain cities have anti-discrimination protections based on sexual orientation. “I would love to say that it made me super resilient, but it was really challenging, I grew up in a very conservative environment,” Ben confides. “I didn’t really know what a gay person was until I was like 11, and at that point I knew that I liked boys, and I knew that something was different about the way that I felt as far as gender identity and gender expression. I forget how tough things were growing up in that sort of situation, and how meaningful it would’ve been to have any sort of gay representation coming across my way. That’s one reason why I am doing what I am as loudly and boldly as I do.” Fortunately, Ben’s family were quite liberal and accepted his queerness, saying they’ve always known because his closet is “made of glass”. But without any proud LGBTQ icons to look up to, Ben turned to YouTube and built a massive social following (220,000 subscribers to be exact), which he credits with “changing” his life. “The whole experience influenced me in the sense that it was a great testing ground for me to figure out who I am, who I was, and how people would handle and perceive that,” he admits. “I would not be where I am today, both professionally and also personally, because I met every single friend and boyfriend and landed every job I’ve had because I started on YouTube. I’m so grateful.” His online career led to several appearances on mainstream television, including teen drama series Guidance and more recently, Fuller House, the sequel to the widely-acclaimed cult comedy Full House. Ben joined the spin-off in its fourth season as the fashionable, 17-year-old aspiring wedding planner Casey, and made history as the franchise’s first openly gay character. “It sort of came at a really dark chapter of my life, where I was really questioning what I was doing and feeling very discouraged. Next thing I know, I booked this incredible thing.” Due to fan demand, Ben was ultimately brought back for an expanded guest arc and later starred in one of the series’ most lauded episodes, The Prom, which was ultimately nominated for a GLAAD Award for Outstanding Individual Episode. “I completely did not expect it. It really encouraged me to continue what I’m doing.” With huge success on both YouTube and television, Ben later pursued the world of music, releasing singles such as Little Games, Never Apart and Boys Will Be Boys, the latter of which addressed heteronormativity and toxic masculinity. Rendezvous however – Ben’s first single as his new stage name Miss Benny – sees the performer take on a more ‘risque’ aesthetic, as opposed to the picture-perfect, boy-next-door persona he presented in his teens. “I literally could not be happier with the way it’s been received, I was sort of nervous that people were going to think it was too much because the song is a more adult perspective and because I grew up on YouTube as a family-friendly teenager. But the good thing about that is that my audience has grown up with me, so they’re feeling the exact same way that I am.”

The song’s accompanying video sees Ben defying gender constructs as he dons fieeerce makeup and a gorgeous gown (as well as a cowboy outfit), which he says came “naturally” for him because he presents as androgynous in his everyday life. “It’s very important for me to blur the lines of masculinity and femininity,” he explains. “When I was living in Texas as a teenager, I never really felt safe enough to embrace my sexuality and my identity, so I repressed my feelings. Now that I’ve moved to sunny Los Angeles, I’ve been liberated. I’m so grateful that people are receptive and have been really supportive, and I’m very lucky to work in a time when people are really celebrating new perspectives and diversity, especially in pop music.” His sexual liberation is most evident on Every Boy, which he says is an “authentic representation of what it feels like to be a 20-year-old gay twink”. However, it’s been an uphill battle for Ben, who is currently releasing music as an independent artist, which means he doesn’t have a record label behind him or a music mogul to show him the ropes. Despite this, he’s proud of everything he’s put out so far and feels a sense of achievement for producing, writing and distributing every song and music video. “It is a challenge to be responsible for every single thing that you put out. It makes it hard not to take criticism extremely personally,” he explains. “But on the flip side, it’s so fun to run through that process. I am one single little girl doing this thing, but the more support and love I can get from people the better.” Back in February, it was announced that Ben was cast as the lead in Glamorous, a groundbreaking new drama pilot from The CW, in which he’ll star alongside Brooke Shields and Pierson Fodé. Eva Longoria is also on board to direct the pilot, while Damon Wayans Jr. will executive produce. Ben will play Marco, an ambitious and creative gender-nonconforming teenager who uses makeup and fashion to let his queer self bloom. After graduating high school, Marco’s life changes forever when a YouTube rant bashing a cosmetics company for their products lands him a job working with its founder and CEO, Madolyn (Brooke). “Even if I wasn’t attached to the show, I would stand for it,” he reveals. “We honestly had the best time filming it and it was so special. I’ve got my little manicured fingers crossed that the show will be picked up. If it does, it will be a moment for TV.” If the show is green-lit for a full series, it will be the first scripted US show to have a gender non-conforming lead protagonist. “I feel really grateful to be part of that movement. I think the best way for queer people to succeed is to support each other. I’m afraid if I say anymore, that it will be the end of me, so that is all I can say!” Also on the horizon for Ben is an upcoming slasher film called Dreamcatcher, in which he plays a “party queen at a house party”. He tells us with excitement: “I only put three things on my vision board this year, and that was to film a movie, book a TV show and release new music, and so far I’ve done all of those things!” Ben has also been developing his sound further and aims to release an EP later this year, which will include Rendezvous and Every Boy, although he has enough material for a full-length studio album. “It’s crazy, I feel everything I’ve done in my career and learned and been through has completely prepared me for the explosive year that I’m having,” he tells us. “I will say this though: while I am booked and blessed, I am still broke! So we need the audience to stream the songs. I am trying to bring attention to my favourite cause, which is me!” Do you have Spotify? Apple Music? Great, because Ben needs those coins. Stream Rendezvous and Every Boy now and embrace the unapologetic queerness and fabulousness that is: Miss Benny.