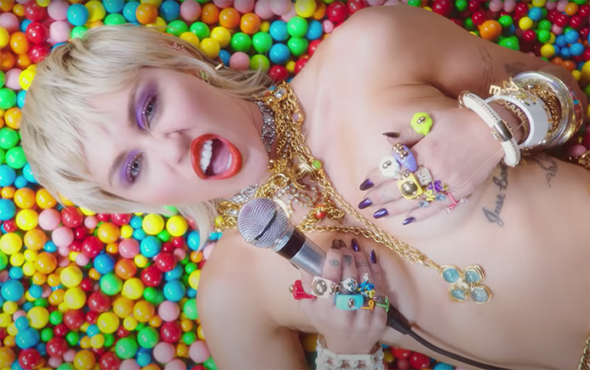 Inspired by rock superstars Debbie Harry, Joan Jett and Stevie Nicks (according to a statement), Midnight Sky is a confident, disco-tinged banger in which the singer boldly celebrates her independence.

Directed by Miley, the visual introduces the singer-songwriter’s Joan Jett-inspired pixie mullet in various scenarios, from laying in the nude amongst colourful gumballs to owning the mic in a room with a disco ball and statues of jungle animals.

“I think all of us are just feeling like we’re expanding. We are declaring what we find acceptable and not, where our morals and our values lie,” Miley said of the track in an interview with Zane Lowe for Apple Music. “I felt like my story and my narrative had kind of been told for me over the past year.

“Obviously, I went through an extremely public break-up and, even more than that, a divorce, and with someone that I had been with for 10 years. That narrative and that experience of 10 years was told for me by one day from the eyes of a helicopter.”

Miley said she felt “villainised” by the media and didn’t engage with the press because she wanted to “articulate this experience in a poetic way” that she could “put back” into her art.

All three aforementioned solo singles are presumed to be included on her upcoming seventh studio album, She Is Miley Cyrus, which was delayed due to her split with Australian actor Liam Hemsworth, vocal cord surgery and the coronavirus pandemic.

Midnight Sky is now available on streaming services – listen here on Apple Music and/or watch the music video below.