Miley Cyrus says she was attracted to girls “way before” boys 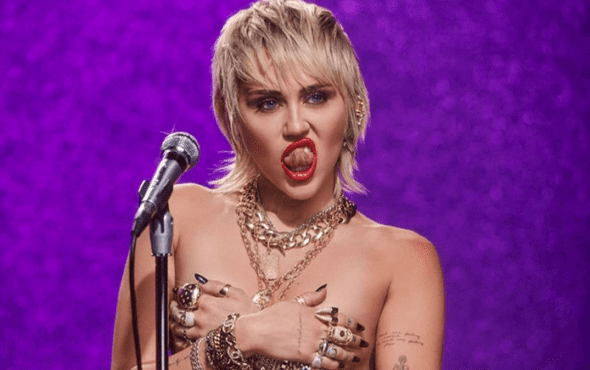 “The first time I ever hooked up with anyone was with a girl. Two of them.”

During her appearance on Barstool Sports’ Call Her Daddy podcast, the star opened up about her journey towards self-discovery, admitting that one of her first crushes was Minnie Mouse at 11-years-old.

“I used to think that like Minnie Mouse was super fucking hot, which is so good I ended up on Disney, so my chances with Minnie went up by like 100!” she joked. “I always thought that the female characters in movies were way hotter than any of the guys. I actually never really understood what these girls were doing with these idiots.”

When Miley was 11 or 12, her friends confided in her about their experiences with other boys, which she “didn’t really understand,” so she “hooked up” with her girlfriends instead. “The first time I ever hooked up with anyone was with a girl. Two of them,” she added.

The 27-year-old also said the dynamics in her same-sex relationships “make more sense” to her.

“There’s not going to be this weird thing that like, I paid for everything and whatever,” she explained. “That’s just like a stereotype, too. Like, if I’m going to be with a girl, I’m totally down to be with, like, a boss bitch that’s as successful or more successful than me – that’s cool, too.

“But, I felt like the women that I end up being around, the role fit easier for me because even in my relationship with men, a lot of the times, I kind of hold a more dominant space, and so it felt like that made it less uncomfortable.”

Miley – who identifies as pansexual – continued further: “I’ve just have been very experimental. I’ve been with a lot of different kinds of like dudes and chicks. I’ve been with super femme girls, girls that kind of make me feel more femme… like I just really don’t have a type.

“The main thing for me is that someone has to bring something that is elevating my life. That’s in all my relationships, not just my sexual relationships.” Miley returned to the music industry last week with Midnight Sky, a confident, disco-tinged banger in which the singer boldly celebrates her independence.

“I think all of us are just feeling like we’re expanding. We are declaring what we find acceptable and not, where our morals and our values lie,” Miley said of the track in an interview with Zane Lowe for Apple Music. “I felt like my story and my narrative had kind of been told for me over the past year.

“Obviously, I went through an extremely public break-up and, even more than that, a divorce, and with someone that I had been with for 10 years. That narrative and that experience of 10 years was told for me by one day from the eyes of a helicopter.”

Miley said she felt “villainised” by the media and didn’t engage with the press because she wanted to “articulate this experience in a poetic way” that she could “put back” into her art.

All three aforementioned solo singles are presumed to be included on her upcoming seventh studio album, She Is Miley Cyrus, which was delayed due to her split with Australian actor Liam Hemsworth, vocal cord surgery and the coronavirus pandemic.

Midnight Sky is now available on streaming services – listen here on Apple Music and/or watch the music video below.