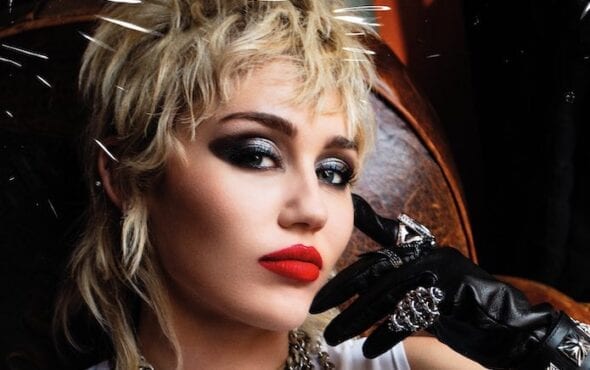 Miley Cyrus has shared the tracklist for Plastic Hearts.

Fronted by the disco-tinged banger Midnight Sky, the singer’s seventh studio album will be her first full-length collection since Younger Now, which leaned towards a country-pop sound.

There’s 12 tracks on the standard edition of Plastic Hearts, including collaborations with Dua Lipa on Prisoner, Billy Idol on Night Crawling and Joan Jett on Bad Karma.

The deluxe has three extra tracks, which comprise of Miley’s fan-favourite Heart of Glass (Blondie) and Zombie (The Cranberries) covers, plus the Stevie Nicks-assisted remix of Midnight Sky.

Miley also shared two alternative covers, both of which feature the same hot pink, Jett-inspired image from the original, but in colour and black and white options – see below.

Last month, Miley explained the process behind the album and how her experiences over the past few years have influenced its direction.

“I began this album over 2 years ago. Thought I had it all figured out. Not just the record with its songs and sounds but my whole fucking life,” she told fans in an Instagram post.

“But no one checks an ego like life itself. Just when I thought the body of work was finished… it was ALL erased. Including most of the musics relevance. Because EVERYTHING had changed.”

The star said the loss of her home in the California wildfires was a “favour” because it “destroyed what I couldn’t let go of for myself,” adding: “I lost my house in a fire but found myself in its ashes.”

Plastic Hearts will be released 27 November by RCA Records.