Miley Cyrus has collaborated with Dua Lipa on her new album 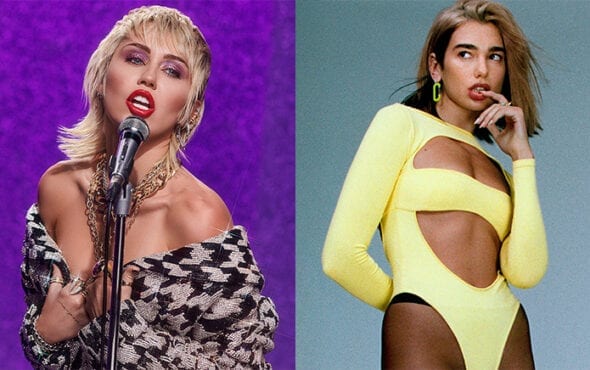 Miley Cyrus and Dua Lipa have collaborated on a track together.

In a new interview, Cyrus said she collaborated with the Future Nostalgia songstress on her forthcoming seventh studio album, She Is Miley Cyrus, as well as punk-rock icon Billy Idol.

“You guys think I’m joking, like Britney and Nine Inch Nails, but I’m not, I’ve got Billy Idol and Dua Lipa on the same record,” she told New Zealand’s The Edge radio after admitting that one of the new songs sounds like “Britney and Trent [Reznor] had a song together.”

Cyrus also said she’s become more relaxed with the rollout for the highly-anticipated album because “there’s so much pressure with that first single,” and “everything after the first single becomes easier.”

When asked about a possible release date for the album, Cyrus gave next to nothing away, sharing that it’s “meant to be played at a festival.”

Although the star received critical acclaim with her two solo 2019 releases, Mother’s Daughter and Slide Away, she released Midnight Sky as the official lead single from She Is Miley Cyrus last month.

The disco-tinged banger was met with widespread praise, and has so far peaked in the top ten of the UK Singles Chart, as well as the top three in Scotland, and the top 20 in countries such as Australia, Canada and Ireland.

Miley Cyrus confirms that she has a collaboration with Dua Lipa on her upcoming album in a new interview! (via @FweakyMo) pic.twitter.com/yvN656vq6j

She Is Miley Cyrus will be the singer’s first full studio album since the country-inspired Younger Now, which features the fan-favourite pop anthem Malibu and a collaboration with her godmother, Dolly Parton.

However, it will be her first release since the EP, She Is Coming. The six-track collection includes Mother’s Daughter, as well as collaborations with RuPaul, Ghostface Killah, Swae Lee and Mike Will Made It.

Watch the video for Midnight Sky below.