Miles Jupp a perfect fit in The Life I Lead – review 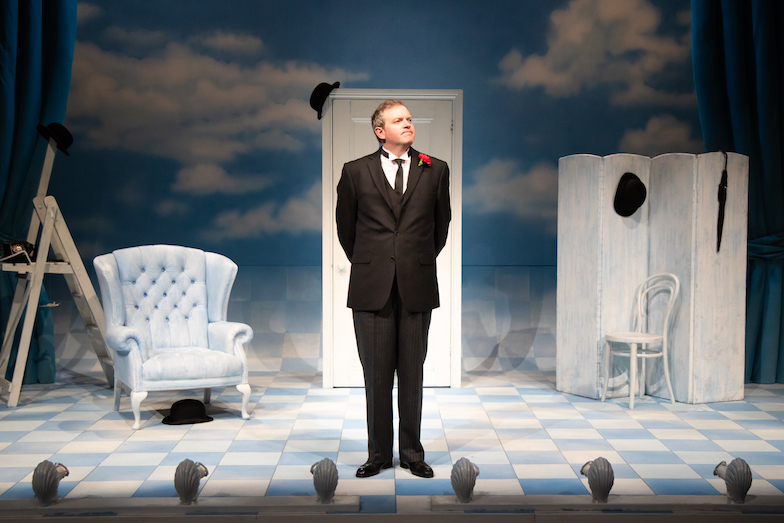 James Kettle’s new one-man play about the life of actor David Tomlinson has opened at the Park Theatre, directed by Didi Hopkins and Selina Cadell.

The Life I Lead tells the story of actor David Tomlinson – best remembered for playing Mr Banks in Mary Poppins, but also star of a number of classic films including Bedknobs and Broomsticks. He made a name for himself performing the role of an affable, upper-middle class English gentleman, both on the silver screen and the West End stage. Miles Jupp is an absolutely perfect fit for the role; his physicality and vocalisation is spot on.

The play – set on a gorgeous René Magritte inspired stage – feels more like an audience with David Tomlinson; we could easily be sat in his drawing room, or in his dressing room, being regaled with tales of his past. The anecdotes are interesting, and there’s a nice balance of light and shade. One moment he’ll be gleefully retelling the time he put his foot in it over dinner while discussing Disneyland with Walt Disney himself, while later he’ll be talking candidly about the difficulty of raising an autistic son during a time when the condition was not properly understood.

It’s an impressive performance from Miles Jupp. He connects with the audience, regularly breaking the fourth wall and addressing us directly, in a wry and knowing manner which is a joy to watch. He utilises some expert comic timing to deliver some deliciously witty one-liners, while the more poignant revelations are handled with sensitivity and gravitas as required. It’s also an intelligent and well-written text – genuinely very funny in places, while at the same time being completely unafraid to tackle some of life’s most serious challenges.

We’re aware that the style and format of the play won’t please everyone, however. It is, effectively, one man telling a life story for the best part of two hours; although there are a couple of neat touches which allude to the magic of the stage and screen, there’s little in the way of theatrical fireworks, and it’s not a play where anything actually happens. If we were to be hyper critical we did feel the energy flagged slightly in the second act and it may have worked better a shorter, punchier, one-act show.

Having said that, it does what it sets out to do extremely well. The Life I Lead is a charming, intelligent and classy play, and Miles Jupp is a perfect fit for the part. It’s a fascinating insight into the private life of David Tomlinson; fans of the actor are likely to be very pleased indeed.