Mighty Hoopla was a magical pop festival experience worth the wait 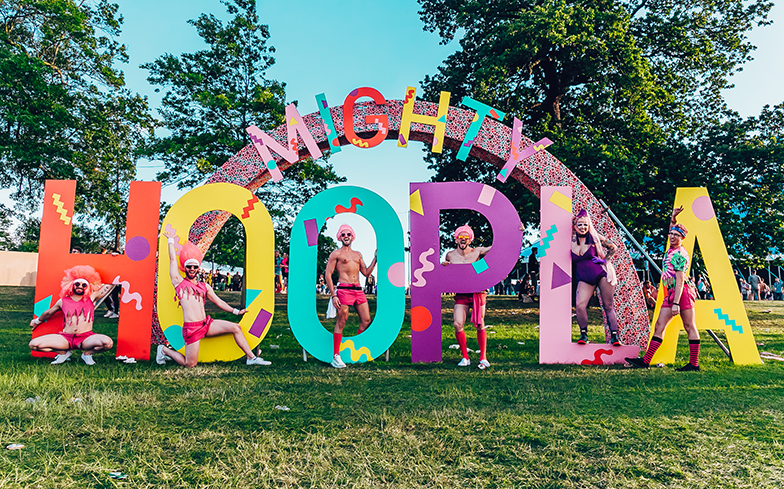 Fifteen months after it was originally supposed to take place, Mighty Hoopla returned to Brockwell Park this past weekend for a day of long overdue queer joy.

Thousands travelled to South London for what many considered the unofficial Pride celebrations in the capital this year, due to the cancellation of Pride in London. With a line-up packed with more chart music nostalgia than a rerun of Top of the Pops, there was built-up anticipation to cheer on our teen idols, reconnect with friends, and get lost in the music we’ve all grown up adoring.

That’s what makes Mighty Hoopla stand out in the festival world. There’s a genuine deep-rooted love for the music and acts who are booked to play. From nostalgic pop acts to the streaming darlings of today via a few hundred drag queens, Mighty Hoopla has built a reputation of embracing the fun and camp carry-on that we all love. In an industry where LGBTQ+ and female acts are routinely underrepresented on line-ups, Mighty Hoopla is a shining beacon of love, empowerment and celebration. Many of the biggest songs played throughout the day will have been consistently branded as a ‘guilty pleasure’ (yuck at that term!), but here they receive the warmest outpouring of jubilation, affection and, most importantly, genuine respect. At this festival, pretension is confiscated by security on entry.

Case in point is a packed out tent for Atomic Kitten on the House of Love stage. Now down to a duo, Liz McClarnon and Natasha Hamilton soared with the crowd’s Big Pop Energy as their hits Eternal Flame, Whole Again and The Tide Is High were sung right back at them, word-for-word. Festival-goers were giddy on the good vibes and the Atomic Kitten ladies were visibly over the moon from the huge reaction.

Over on the Main Stage, Alexandra Burke was the total pro she’s always been, pulling together a hit-packed set as a very recent addition to the line-up. The field in Brockwell Park was humming with excitement before she strutted on stage with the power walk only a popstar can pull off. The crowd was treated to storming renditions of Broken Heels, All Night Long, Start Without You and Whitney Houston classic I’m Every Woman, complete with energetic choreography and a stellar vocal performance. The big sing-along moment came with her soaring X Factor winner’s single Hallelujah which instigated a sea of waving arms. Alexandra finished the set with Bad Boys, suitably getting Mighty Hoopla pumped for the evening ahead.

Up at The Drop, drag queen DJ Jodie Harsh was spinning classic dance anthems, disco favourites, and original numbers with her signature flair. The set was the perfect accompaniment for an early evening dance, as the skies above South London remained clear and dry throughout the day and into the night.

When it comes to music legends, Mighty Hoopla didn’t hold back on that front either. Gabrielle delivered a sublime set as the sun went down. Her buttery smooth vocals are still as magical as her 90s/00s peak with hits like Sunshine, Rise and Out of Reach taking everyone back in time. It was the show that brought everyone together, hugging and singing along to the chart numbers that soundtracked their youth. Naturally the biggest response was reserved for 1993 hit Dreams as a thousands-strong chorus backed Gabrielle throughout the song.

Back up at the House of Love and a bonafide gay icon took to the stage. Jimmy Somerville was flanked by his backing band for an electrifying set of his golden hits. His rendition of the Sylvester smash You Make Me Feel (Mighty Real) set the tent alight with disco-tinted elation, while Jimmy remarked he hadn’t been in Brockwell Park for decades. The set concluded with Bronski Beat’s seminal hit Smalltown Boy as Somerville’s distinctive vocals soared higher and higher as the era-defining electronic riff amped up the crowd. It was a truly spiritual experience for fans of Somerville and that era of boundary-pushing pop music.

As for the main event, headliner Cheryl more than understood the assignment. The former Girls Aloud star appeared on stage in a pink sequinned winged jumpsuit flanked by her dancers and opened her set with A Million Lights deep cut Sexy Den a Mutha. She knows this crowd. There were thumping renditions of Promise This and Call My Name with full choreography and power-pop attitude, a 3 Words/Parachute medley, and a surprise cover of Rozalla’s timeless dance anthem Everybody’s Free with the Progress Pride flag on full display on the screen behind her at the end. Fight For This Love was saved for the finale, and the unexpected appearance of former band mate Nicola Roberts for an interpolation of Show Me Love from Cheryl’s legendary BRITs performance received the biggest roar from the crowd for the day. It rounded off the festival on the highest note.

It may have been 15 months later than we wanted it to be, but Mighty Hoopla was more than worth the wait. They have created a space where the female and LGBTQ+ artists who have either – at certain moments in their careers — been mistreated, poorly supported or unfairly disregarded by the music industry and mainstream media, can be celebrated and appreciated. It’s a space where outsiders who were teased for their love of pop and who want to express themselves free of judgement, can come together and revel in the music they love so dearly. It’s a meeting of love and liberation between the acts and the audience. Mighty Hoopla is dancing to the beat of its own drum on the festival circuit – and it’s all the more better for it.