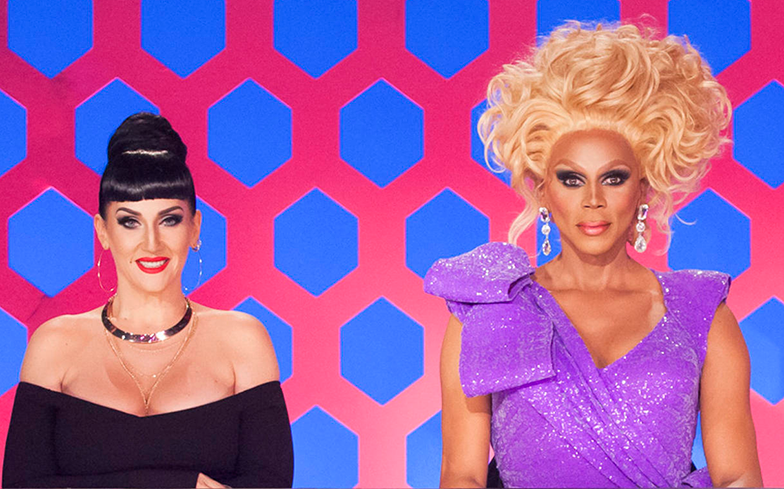 In her first interview for the highly-anticipated British spin-off, the legendary judge tells us why fans “are going to die” over Drag Race UK.

After “five bloody years” of meeting with televisions commissioners and even sharing a bedroom with Perez Hilton and Katie Hopkins for a month – the horror! – Michelle Visage has finally got what she wants: a UK version of Emmy-winning reality-competition, RuPaul’s Drag Race.

“You’re going to die, I’m telling you,” Michelle says of the long-awaited series. “Just know we are celebrating all things British. I’m obsessed with your country so I was in my element.”

Drag Race UK premieres October and will feature ten incredible British queens who will sashay, shantay and compete in a variety of challenges for the title of the UK’s first Drag Race Superstar.

(Read our exclusive interviews with all ten competitors queens here.)

“I don’t want them to be compared to the American queens, they have different cultures, different aesthetic, different approach,” she tells us. “Drag queens have always been about the performance and the talent, so I don’t want people to think that because they’re not highly polished and they don’t look like Aquaria, that they’re not good.”

In her first interview for the series, Michelle discusses the differences between Drag Race UK and the US original, how it will impact the British drag scene, and where she sees the franchise going next.

So, this cast… It’s safe to say every queen embodies charisma, uniqueness, nerve and talent.
The cast is amazing. I remember when it was announced, there were some negative naysayers going, ‘They’re going to ruin it!’ and it’s like, first of all, this is our community. We’re all in this together, why are you not supporting something so great? I’ve worked five bloody years to get this show in the UK. I went into a house with Perez Hilton and Katie Hopkins, did it all to garner attention so we could get a British version. Trust me when I tell you that we’re not here to wash anything away, we’re here to celebrate all things British, and I think we did a really great job doing that.

You said it was in the pipeline for five years, how did it get to the point where the show was commissioned?
Drag Race in general took nearly ten years; it’s so difficult to get a TV show made. When I was a columnist for you at GAY TIMES, I was over there a lot trying to get it off the ground. We met with commissioner after commissioner, and I think the problem was that they weren’t watching it. If they were, they’d see that it’s so much more than a show about boys dressed in girls clothing. It’s a show about dedication, heart, passion, compassion and the tenacity of the human spirit. These kids are so talented and where the majority of them have come from, it’s not been easy, so to show that on the BBC, of all places. With all the channels we met with, I thought, ‘ITV, for sure; Channel 5, for sure; definitely Channel 4.’ Then we ended up on the amazing BBC.

Can we expect the queens and the show to pay tribute to British culture?
It would be very silly if we didn’t. You’re going to die, I’m telling you. Just know we are celebrating all things British. I’m obsessed with your country so I was in my element, and of course, you’ve got Alan Carr and Graham Norton. I was hoping Ru would love the UK the way I love the UK – you know I’m an anglophile! At the end of it I said, ‘Well?’ and he said he loved it and couldn’t wait to come back. He stayed in East London, had such a good time and it made me so, so happy.

Have you ever made RuPaul watch an episode of Eastenders or Corrie?
Oh my god, no I haven’t, but I’m going to get him to watch Benidorm: ‘Let’s be bloody real.’ I love that bloody show so much, it’s just filled with Northern accents, they’re my favourite thing. I really love your beautiful country, your politics are as fucked as ours, so we’re in this together.

Right? What do you think makes Drag Race UK different, other than being set in the UK?
Listen, there’s similarities. You have Ru, you have me. We’re different people culturally. British people in general don’t wear their emotions on their sleeves, but these kids have been through a lot more than the average person. These are queer people who have might not led the easiest life, so they’re definitely more emotional than the average person would be. We’re not trying to make it American, otherwise we’d do it in America. We’re there to make it British and we’re celebrating it; it’s very different to American drag, so that in and of itself, is different. It’s very American to do the looks, but very British to put performance first, and I celebrate that, being an old school girl myself. I’m really excited for the world to see what they have to offer. Now, I haven’t seen any of the episodes but I’ve heard they’re incredible. Ru looked at me and said, ‘This is going to be on for such a long time.’ Is that confirmation that a second season is in the works?
It bloody better be! But there is no confirmation. I’d be the last to know… I can’t wait until it starts airing and everyone sees these talented queens. I don’t want them to be compared to the American queens; they have different cultures, different aesthetic, different approach. Drag queens have always been about the performance and the talent, so I don’t want people to think that because they’re not highly polished and they don’t look like Aquaria, that they’re not good. That is not true. I want to put it out there that that’s not just what drag is about, it’s not just about looking pretty. Drag has evolved so much and because of YouTube and RuPaul’s Drag Race, people are learning to do makeup. It’s bloody amazing, but at the end of the day you can’t just sit there, be pretty and be dead behind the eyes. Drag is meant to make you feel something, make you laugh. It’s giving the middle finger to society. While I appreciate a gorgeous beat face, we need more than that to keep us going. It’s like when you start a relationship and you’re fully attracted to them, your willy is at full attention, or you get fanny flutters, but once you get to know them you realise there’s no substance and they’re not attractive to you anymore. As you know with me being a judge for many years, I get bored with ‘just pretty’ very easily. British drag is about understanding the beautiful heart and soul behind the aesthetic. There’s some crazy aesthetics in Britain and I absolutely love it.

We’ve got so many incredible guest stars this season – is there anyone you wanted who couldn’t appear? You told me last year you wanted Jennifer Saunders and Joanna Lumley…
They were the first I reached out to. I also wanted Dawn French because she’s a friend, and she would kill to be on, but she was in Boston. There’s a bunch of friends that couldn’t because of their schedule, but that means… season two. This is the first season, it’s only going to get bigger and bigger and the guest judges will come banging on the door.

Well we’ve got Spider-Man, Arya Stark and Geri Halliwell, the British flag.
That’s hilarious, the Union Jack is going to be there.

Do you think we’ll ever see the US and UK queens come together for some kind of special in the future?
That would be really fun, our queens verses the queens that are on Drag Race UK. It could be really interesting, the aesthetic wars.

Do you have a favourite queen on Drag Race UK?
You know I can’t answer that, you silly sausage!

They’re all sickening, and with this cast, it’s impossible to predict who sashays first and who reaches the final…
It’s virtually impossible really, because as you know with Drag Race, you say ‘There’s the winner’ and then the twists and turns that come are just unbelievable. You just don’t know what’s going to happen, like the Valentina moment with the mask. That’s the beauty of Drag Race.

What do you think Drag Race UK will do for the British drag scene?
I hope a lot. I hope these kids go out and make shit tons of money. I’m going to call Jeremy Joseph from G-A-Y right now and say, ‘You better start paying these bitches.’ I know they’re used to making 50 quid, working their arses off for not a lot of money. I’m hoping the show can get their fees raised and they get to go on tour, go to other countries. The American queens always get the attention and the gigs, and that’s amazing and I love our girls, I want them to keep working, but now this is an opportunity for the UK kids to become the superstars that they are.

Where would you like the Drag Race franchise to go next?
Canada’s coming, but for me the most important place is the UK. I’d also like Australia, I’d like to do that with Ru because we have such a huge fanbase there. I wish we spoke Portuguese because it would be huge in Brazil. It’s just wonderful what Ru has done, all these kids that would’ve been stuck in clubs for the rest of their lives are getting the chance to strut their stuff on national telly.

Would you say drag is mainstream now?
It still isn’t mainstream, I’m going to stand by that at the end of the day. You still have the Theresa May’s and Boris Johnson’s running around the country. They’re still not going to watch it the way they’d watch an episode of Strictly; it’s just not going to happen. This is a queer show made by queer people for queer people, and the beauty of it is the kids, the disenfranchised that never felt like they had a home. When I was young, I never did fit in and people would make fun of me. I’m not trying to bring the tone down, but when I was 13, I could’ve turned on Drag Race and said, ‘Oh that happened to my favourite queen’, and I maybe wouldn’t be so hard on myself because I would’ve known I wasn’t alone. It’s wonderful to let people know that they’re not alone and there is hope, and things do get better. It’s also wonderful to have families watch it and understand their queer child a little bit better.

C’mon, something!
Listen, I like my job! The end.