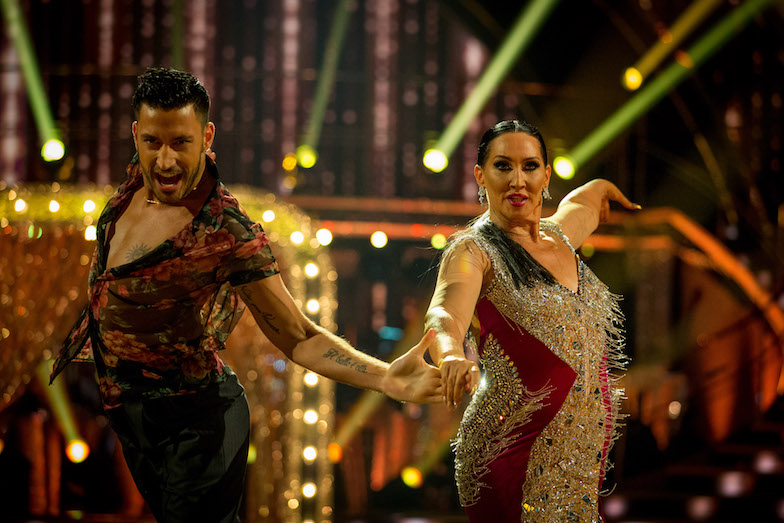 Two weeks ago, we saw who our Strictly couples for the year would be, and watched them take to the floor for the first time. On the floor, James Cracknell and David James struggled with their routines, with Karim Zeroual continued to look like one to beat, although former Emmerdale actor Kelvin Fletcher surpassed the rest of the competition to lie at the top of the leaderboard.

The show started off with one of its most sparkly numbers in its 15-year history. The sparkly costumes almost dominated everything, but the pros made it a good dance to watch, and the correct way to get us in the mood for the series to properly kick off.

And speaking of kicking off, we fittingly started with former England footballer Alex Scott. As Neil Jones’s first proper celebrity partner – excluding Christmas specials – and although they spent a pretty long time out of hold, the dance itself was fun to watch, fairly undermarked.

Chris Ramsey was enjoyable to watch, although the dance wasn’t there. There was the occasional bit of hip movement, but overall it was absent. Like new judge Motsi said: “Your face was there, but your body was on holiday.”

Catherine Tyldesley’s Viennese Waltz was a beautiful enough affair, another undermarked dance, but Saffron Barker delivered. After seeing such low scores, expectations weren’t high, but she moved in all the right ways and enchanted her way across the dance floor. Fingers crossed we’ll get to see AJ in his first final this year.

Mike Bushell was about as awkward as expected, with a mid-section that made no sense, and as someone eloquently put it, he looked like a “Teletubby.” Over twelve hours since the show, and I’m still baffled as to how this got higher than Alex and Catherine. Viscountess Emma Weymouth showed she had potential, but she felt a bit reserved in some of her movements. Another undermarked performance, but she might yet slay in the ballroom dances.

In credit to James Cracknell, he did suffer a near-fatal injury several years ago, so the fact he’s here is incredible. The last word in that sentence cannot, however, describe his dance which was just flat and wooden. Basically, the opposite of Chris Ramsey, physically James was there, but emotionally he looked in a completely different place.

We hadn’t gotten to see Kelvin Fletcher dance before, as he wasn’t part of the show during the launch, but sometimes things are just worth waiting for. He nailed every movement he had, his booty was popping off in all the right places, and his introduction showed some shirtless Emmerdale moments. What’s there to complain about? If this samba was danced later in the competition, then he could’ve gotten the second perfect score for the dance.

David James couldn’t hope to compare in his foxtrot, and predictably he didn’t. At least he was able to save a goal at the end, but that was the only thing saved… But then we got to Michelle Visage. And henny, she came to slay. Her attitude was right, her movements were brilliant. The only real criticism is that she was dancing to So Emotional, and she didn’t channel her inner Sahsa Velour with a host of rose petals.

Dev Griffin then managed to mirror Michelle, with a foxtrot where he was light on his feet and oozed charisma. We predicted he might be one to watch, and this shows he really could be. But despite coming in on a helicopter Anneka Rice wasn’t the best shimmier, and although she was relatively enjoyable to watch, the scores don’t take that into effect.

Paralympian Will Bayley looked to start off strong in his quickstep, but it didn’t look smooth in some places. Meanwhile CBBC cutie Karim Zeroual showed bounds of energy on the floor. Perhaps a bit too much energy, and some areas looked a little hodge-podge, but he’ll certainly be one to keep eyes on. We ended on Emma Barton, and hopes were higher for her professional partner Anton du Beke. And although she did alright, she didn’t set the competition alight like we hoped. But plenty of weeks to come for her to sort that.

You can watch Michelle and Kelvin slay the competition below, or follow these links here and here.

At the moment, Kelvin Fletcher and Karim Zeroual look like the ones to beat. Given they finished high on the leaderboard, Michelle Visage and Dev Griffin are also ones to keep eyes on, but with recent series having surprise exits early on, maybe one of them could fall victim. Saffron Barker is definitely a contender, and she’ll likely blossom over the coming weeks. But despite low scores, don’t rule out Alex Scott and Catherine Tyldesley, they’ll likely have some performances in them to wow us.

As for going home, it’s hard not to see James Cracknell being the first to go. But other low scorers like Chris Ramsey and David James could be in danger. Anneka Rice’s saving grace is she might become the public darling, but whether she’ll have the public on her side is another story.

But who performed your favourite dance of the night? Let us know by voting here.

Strictly’s next live show is next Saturday at 18:40 on BBC One. And if you still need Strictly magic in your life Strictly: It Takes Two will be on every weekday at 17:15 pm on BBC One.

Related: DUP politician Jim Wells will no longer watch Strictly because of possibility of same-sex couples