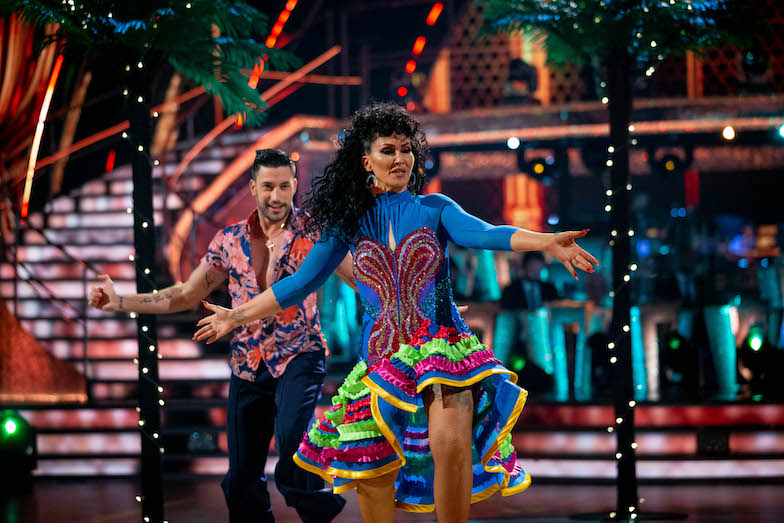 Fans were confused with some of the scoring last night.

Usually the week after Movie Week on Strictly, there’s a drop off in the dances. The movie magic sweeps the celebrities to a whole new world, but then they come crashing back down to see Craig’s four paddle.

However, this week the vast majority of celebrities improved on their scores, although fans were confused with the scoring. While they were happy to agree that David James and Mike Bushell had improved, the scores given to them eclipsed people who danced better than them.

Last week, goalkeeper David James survived his second dance-off and sent television and radio presenter Anneka Rice home. It was a fair decision given that Anneka really didn’t suit the high-energy Charleston, while David did look to be improving.

In our reader poll, Michelle Visage topped it once again, with 71% of the vote. The only other celebrity to receive votes was Kelvin Fletcher, who achieved 29% of the vote. And if you follow the link here, you can once again vote for your favourite celeb routine from last night.

Opening the show this week was Chris Ramsey and Karen Hauer with a high-energy jive to the Elton John song Saturday Night’s Alright for Fighting. Chris’s costume might’ve been a bit questionable, although it won me around in the end, but his dancing was on point. Just on the wider leaderboard, he seemed to suffer from going early as better scores often come out as the show goes on.

But no matter where Emma Barton danced in the show, her Viennese waltz was always going to be beautiful. She captured all the right emotions, and it was beautiful to watch again and again. And Dev Griffin was always going to suffer a small setback after the highs of his street routine, and he dropped nine points in his cha-cha-cha. It was perhaps a little harsh, but it wasn’t the best dance of the night.

I was a little worried that Catherine Tyldesley’s rumba last week was going to be a one-off good dance, and she would go back to struggling with the rest, but under the guidance of Johannes, she really shone and delivered one of the campest routines in Strictly history. And of course I LOVED it, practically every Strictly fantasy was fulfilled with it. Half the views on YouTube may possibly me from me.

Alex Scott has shown steady improvement throughout the competition, and although I had a few issues with her posture, she delivered another solid routine. It was a shame to see it only 23, as it definitely didn’t deserve to be the bottom of the leaderboard.

I was expecting David James to improve, but still be around the bottom of the leaderboard, but on one front I was wrong. There is no denying there was clear improvement, but at one point he did look a little behind Nadiya and in one way had seemingly forgotten part of the routine. He deserved higher marks than usual for clear improvement, but a 28? Did seem a little high, and I think Chris did a better dance.

Given the general difficulty of the rumba, I wasn’t sure if Kelvin Fletcher would keep up the standard that he managed the week before, but he still gave another strong performance. I personally preferred Emma Barton’s dance, but I don’t think four 9s was undeserved.

Much like Kelvin, I didn’t think Viscountess Emma Weymouth would do a bad jive, I just didn’t think it would suit her like the foxtrot did. I don’t think she was fully sharp with all the kicks she had to do, but she still delivered a pretty strong performance, and finishing higher than Chris on the leaderboard makes enough sense.

Much like Karim last week, Michelle Visage had the dance that didn’t fully suit her. She shook her body well, but there have been salsas with a lot more energy in them. However, the worst moment for Michelle came at the end, when she bumped heads with her partner, Giovanni. Her score dropped from last week, but our girl will be back next week stronger than ever.

Will Bayley continues to be an inspiration on the floor, noting the difficulties he has with heel leads as he has no ankles. The dance wasn’t horrible, but on an evening with incredibly strong routines it was lost a bit in the water.

Expectations were not high for when Mike Bushell took to the floor, and after the routine they remained relatively low. He had improved, but it looked to be the weakest of the night. But then the judges lavished him with praise, so much so it felt like they had seen a different routine than what was broadcast on my television. And when the scores came in, it definitely felt like I’d watched a different routine. Nothing I saw on that floor was worth the 9 that Motsi gave it, even the 7 from Craig seemed a stretch. You could see Mike had improved, but on a 6s level rather than that. There’s no way it should have finished higher on the leaderboard than Catherine and Michelle.

Saffron Barker danced next, and much like Emma B, she delivered a beautifully moving contemporary routine that wouldn’t have left many a dry eye in the house. The evening ended on Karim Zeroual, and training footage tried throwing us off with him constantly smiling in the serious tango, but he smashed the routine into oblivion. Every staccato movement was on point, he moved across the floor with ease and intention and delivered the best tango seen in Week 4, and dare I say it, perhaps this year. On a night of pretty bizarre scores, those 10s were fully earned.

Topping the leaderboard this week were Karim Zeroual, Kelvin Fletcher and Emma Barton; all of them delivered sensational routines that were more worthy of later stages in the competition. Saffron and Catherine also did really well, and I think Catherine should’ve finished higher up on the leaderboard than she did. And as much as I disagree with their overall scores, David James and Mike Bushell deserve some credit for good improvements.

In the danger zone for dancing again are Alex Scott, Will Bayley and Chris Ramsey, but in this week of mismatched scores the fanbases might be more important than ever. Before the series started, Alex Scott was the hot favourite so people might not want to see her make an early exit. Meanwhile, although not in bad positions, David James and Vicountess Emma Weymouth are low down on the leaderboard and could end up in the dance-off without the votes.

Karim and Catherine delivered some really great routines and you can watch them either below or here and here respectively. And as we know you’ll be after Michelle’s performance, you can watch it here, and let us know what your favourite dance was by voting here.

Strictly’s next live show is next Saturday at 18:40 on BBC One. And if you still need Strictly magic in your life Strictly: It Takes Two will be on every weekday at 18:30 pm on BBC Two, and 18:00 on Friday.