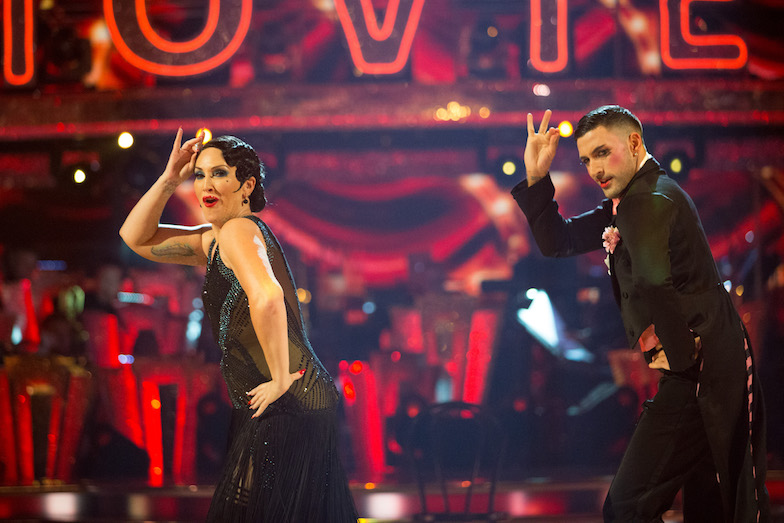 And Craig channeled his inner Michelle Visage when he talked about Anton du Beke’s teeth.

Movie Week on Strictly is one of the best night’s for any Strictly fan. The costumes and make-up are sensational, the movie magic always brings out a little extra something in the celebrities, and a judge makes a massive clanger, usually Bruno falling off a chair.

And this movie night had them all, with some amazing dresses, and an incredible Pikachu costume, celebrities like Emma Barton, Emma Weymouth and Catherine Tyldesley smashing their previous best scores, and Craig having his own ‘That’s her nose, Michelle’ moment with Anton’s teeth.

Last week, despite a noticeable improvement, it was former Olympic rower James Cracknell who was eliminated in the dance-off. And it was a fair decision, David James did improve heavily in his paso doble, with a lot more sharper movements, while James remained relatively the same.

And something else remaining the same was how much our audience are supporting Michelle Visage, as she jointly topped our poll on 40% of the vote with CBBC star Karim Zeroual. The other dancers to get votes were Kelvin Fletcher and Chris Ramsey, on 10% of the vote respectively.

And make sure you vote in our poll this week for your favourite dance!

As most theme nights do, the routine started with a brilliant pro routine to songs from our Pixar favourites like The Incredibles, Up and Toy Story. And with the cute characters making their own appearance, it just upped the dance’s appeal.

Michelle Visage opened Movie Week, and she was Liza with a Z for a Cabaret-inspired quickstep. And while we might not have made our minds up in Chelsea – we already knew we’d be voting for her – she slayed the dance and opened the show on one of its best ever notes.

It was a tough act for Alex Scott to follow, but her Moana-inspired rumba was a cute number, and a little unexpected in places. It might not have been the best dance of the evening, but it was very sweet to watch. And Chris Ramsey’s American smooth had its moments, but overall wasn’t my favourite of the night.

It has to happen to every celebrity at some point, but Karim Zeroual found the dance that wasn’t for him, as his samba was a bit clumsy. He gave it all the energy he needed, but given how the samba is one of the trickier dances done on the show, it’s not a surprise he wasn’t able to completely nail it.

But on the complete opposite end, Catherine Tyldesley may have just had her breakthrough moment. Again, with maybe the trickiest Strictly dance, she nailed all the passion needed for the rumba, and smashed her previous best score by 12 points. Last year’s champion Stacey Dooley got the same score for her breakthrough dance in Movie Week, could Catherine have just properly entered the competition?

Will Bayley then performed childhood in a dance with a sensational Pokémon paso doble. It might have been anywhere near the best dance of the night, but it gets votes for childhood memories alone. Kelvin Fletcher might have stumbled with his last dance, but he was well and truly back with this Charleston, scoring the first 10s of the series. However, unpopular opinion alert, the entrance to one of the lifts looked a little janky, so the 10s feel undeserved. It was definitely one of the best of the night, but 9s all round would’ve been a more suitable score.

Emma Weymouth also danced the best she’s done all series with a beautiful foxtrot to the Downton Abbey theme, but unfortunately Anneka Rice then let the ball drop. The Charleston didn’t suit her at all, and she only managed tiny steps in most of her movements, subsequently scoring the lowest for a Charleston in Strictly’s history.

Saffron Barker rescued the show with a powerful paso doble, but Mike Bushell stumbled around for the Magic Mike-inspired cha-cha-cha. And with pro dancer Katya Jones tumbling twice, Mike’s moves weren’t the only awkward part of the dance.

David James recovered well from last week with a very watchable American smooth. Dare I say it, perhaps a little undermarked, as to me this was his best dance he’s done on the show. I’m not saying it should be high 20s, but maybe a 19/20 might’ve been a bit more suitable.

The next two dances were the right way to end a Strictly show. Emma Barton embodied the 80s with that Austin Powers routine, although it will forever be overshadowed by the line “They’re not fake?” as Craig realised he’d made a Michelle Visage-style mistake when commenting on Anton’s teeth. Just to clarify for everyone, those are Anton’s real teeth, and that’s The Vivienne’s real nose.

And Dev Griffin then tackled the first Couple’s Choice of the series, with a street dance routine. And you could tell by how the blue paint was sweating off of him, that he gave that dance everything he could. All of the rest of the couples who’ll do a Couple’s Choice routine have a hell of a lot to live up to now. Not bad given how Dev reportedly accidentally dropped Dianne during rehearsals.

Kelvin, Dev and Michelle topped the leaderboard, and all gave great performances. But a lot of praise has to be hampered onto Catherine and both Emmas for the amount of progress they’ve made with some really sensational routines. And Will also gets a lot of praise for bringing all of our childhoods onto the Strictly floor.

Anneka, David and Mike find themselves in the low position on the leaderboard, spelling danger for them all. Last series, the British public did tend to punish those lower on the leaderboard, so unless Anneka summons up a lot of support it could be her exiting the competition. However, Chris, Alex and Will could also be in a danger zone.

You can watch Michelle and Catherine’s beautiful performances below, or by following the links here and here respectively.

Strictly’s next live show is next Saturday at 18:40 on BBC One. And if you still need Strictly magic in your life Strictly: It Takes Two will be on every weekday at 18:30 pm on BBC Two, and 18:00 on Friday.