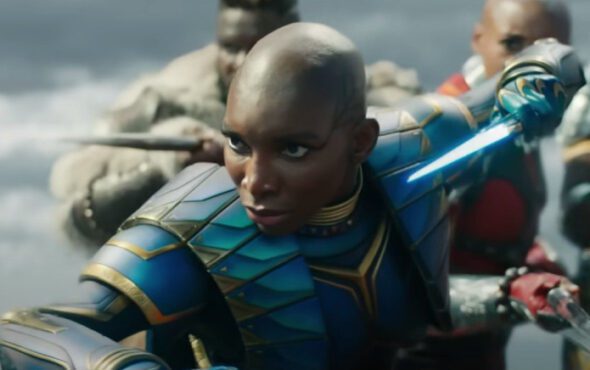 A former leader of the Dora Milaje – the team of elite warrior women sworn to protect Wakanda – Aneka has been romantically linked in the comics with Florence Kasumba’s recurring character Ayo.

Not including her upcoming appearance in the sequel, Ayo has starred in four MCU projects to date: Captain America: Civil War, Black Panther, Avengers: Infinity War and Falcon and the Winter Soldier.

It has been confirmed that Michaela Coel, who was announced for Black Panther 2 last year, will play Aneka.

The actress is best known for her creating and starring in the E4 comedy Chewing Gum and the HBO drama I May Destroy You.

For the universally acclaimed latter, Coel became the first Black woman to win the Emmy Award for Outstanding Writing for a Limited Series, Movie or Dramatic Special. She also won the BAFTA for Best Actress.

Additionally, Dominique Thorne and Tenoch Huerta will make their MCU debuts as Riri Williams/Ironheart, a genius inventor who creates an Iron Man-inspired suit of armor, and Namor, the ruler of the underwater nation Talocan.

Following the tragic death of Chadwick Boseman in 2020, it was announced that the role of King T’Challa would not be recast and that the film would honour the titular star’s legacy.

A synopsis for Wakanda Forever reads: “Queen Ramonda, Shuri, M’Baku, Okoye and the Dora Milaje, fight to protect their nation from intervening world powers in the wake of King T’Challa’s death.

“As the Wakandans strive to embrace their next chapter, the heroes must band together with the help of War Dog Nakia and Everett Ross and forge a new path for the kingdom of Wakanda.”

The MCU later introduced their first-ever gay superhero in Eternals with Brian Tyree Henry’s Phastos, who also shared a passionate kiss with his husband Jack (Haaz Sleiman) – another first for the franchise.

Although Thor: Love and Thunder disappointed audiences with their depiction of Valkryie’s (Tesse Thompson) queerness, all of the above confirmed that Marvel executives are committed to telling more non-heteronormative stories.

At the Black Widow fan premiere in Hollywood, Victoria Alonso – Marvel’s Executive Vice President of Film Production – was asked if this was a sign of “queer things to come”.

“It takes time, we have so many stories that we can tell,” she told Variety

Black Panther: Wakanda Forever, the final film in Phase Four of the MCU, is scheduled to be released 11 November. Watch the trailer here or below.