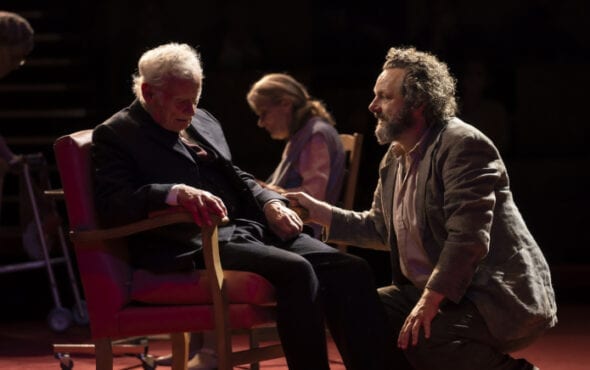 The NT’s Olivier Theatre space has reopened its doors for the first time this year with a revival of Dylan Thomas’ classic radio play, directed by Lyndsey Turner.

For those unfamiliar, Under Milk Wood is far from a conventional play. Originally written for BBC Radio, it has subsequently been adapted for the stage. In the original, a narrator invites the audience to listen to the dreams and innermost thoughts of the residents of a fictional Welsh village called Llareggub. Here there is a change – set in a care home, Owain Jenkins (Michael Sheen)  is visiting his father Richard Jenkins (Karl Johnson) who we assume has dementia. A photograph album, which is used to jog Jenkins Senior’s memory, is brought to life with the care home residents telling the dreams and thoughts that Thomas had written for the radio play original.

The new framing device, scripted by Siân Owen, works well enough to recount these stories. Under Milk Wood plays out more as a series of vignettes as opposed to a through-narrative, with lots of entertaining scenes and of course Thomas’ achingly beautiful poetry. Sheen is an ever-present and charismatic narrator, but this is very much an ensemble piece with numerous impressive turns. We enjoyed Siân Phillips as the melancholy Polly Garter, lost in her own thoughts as she mourns her one true love, while Alan David and Cleo Sylvestre put in wonderfully withering performances as Mr and Mrs Pugh. Theirs is evidently a marriage of mutual contempt, complete with some acerbic one-liners.

With the new set up at the Olivier Theatre, the play is presented in the round, which works well for a performance of this nature. Unsurprisingly for a show which was originally a radio play, the focus is much more on the dialogue, so the staging is quite limited but still has an intimate and cosy feel. There’s not much going on in the way of stagecraft – although the shifting of the lighting to denote the times of day is effective – but there are a handful visual gags involving the creative use of a dining table which raise a few chuckles.

We enjoyed our evening at the newly-reconfigured Olivier Theatre with Under Milk Wood. It’s an unusual play, so we’d recommend getting expectations in the right place if you’re not familiar with the text; but the combination of thoughtful staging, beautiful language and some really impressive acting performances come together to create an engaging and almost dreamlike night at the theatre. Well worth checking out.