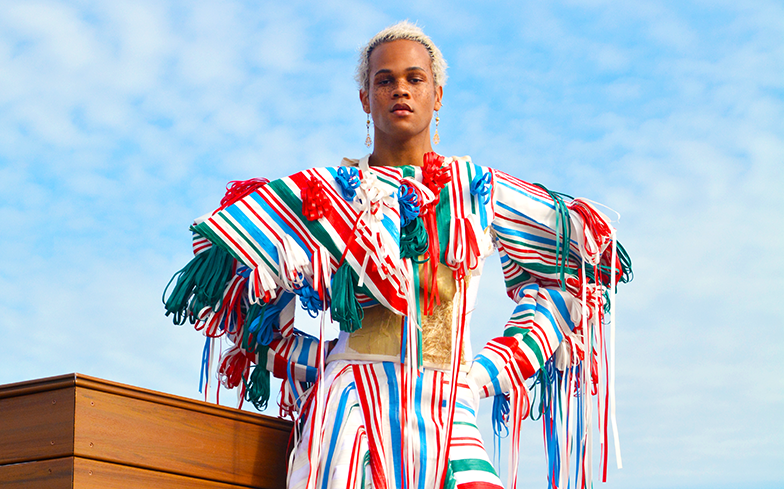 Bad For You is a slice of luscious R&B anchored by Merlot’s smooth and soulful tones, serving as a striking introduction to them as a recording artist. But fans of the song may be wondering when the next batch of music will be coming along.

“I’m working on a project in Los Angeles right now and will actually be living there till the holidays,” Merlot tells Gay Times. “I’ll begin dropping content in January and throughout the year. I’m so excited about it.”

In anticipation of the new material, here Merlot speaks about the challenges new artists face, the issue of femme-shaming – particularly within the gay community – and what needs to happen to make sure queer nightlife spaces remain vibrant and safe for everyone across the LGBTQ community.

Bad For You is an incredible debut single – how have you found the reaction to the track since you released it earlier this year?
Thank you so much! I’m overwhelmed at the response it has gotten so far. It was so close to my heart, and I released it all on my own without any management or labels, so I was nervous to see if people would even hear it. I am so grateful for everyone who reached out, and everyone who posted about it. It’s like a dream come true. What was it about the song that made you want it to be the introduction to you as a recording artist?
I really thought the song embodied the style of music that I wanted to create, and I thought it would sum up the essence of what to expect from my artistry in the future. I had made about five other tracks on top of Bad For You, but this was always my favorite one.I thought that if I enjoyed the track and could dance to it, hopefully everyone would enjoy it too and see the work I put into it.

The accompanying music video is stylish and striking – what’s the meaning behind the sexualised imagery that plays throughout?
The video was for me and the directors (brothers Santiago and Mauricio) a collection of portraiture. We wanted to highlight diverse bodies and characters in ways that were reminiscent of the old New York club and entertainment scene, while still not forcing anyone to have to “act”. We took our time with the casting so that every character felt authentic, and so everyone felt comfortable in their role. I loved the idea of including the nudity because, in simple terms, I love the sex appeal it gave the video. I am fascinated by the human body and wanted to showcase it in a sexual, yet tasteful way.

You are a multi-disciplined artist in the sense of how you express yourself through fashion, as well as through your visual concepts – how much does your music inform your visual expression and vice versa?
In a way, I would say they don’t necessarily inform each other but are always just hand-in-hand. My music is an extension of myself, my personality and my vision. I would say the same about my visual expression and style. I figure as long as I’m being honest with myself with my style and my music, they’ll always mesh and seamlessly work together. Who are your biggest influences when it comes to your music?
My biggest influence in music came from early Motown, then Anita Baker, John Legend, Frank Ocean and Azealia Banks. I was also inspired music videos of Erykah Badu and Missy Elliott, and while they still influence some things, I now usually look to the pop charts and radio hits a lot more to stay in touch with growing trends and patterns. I’m also grateful for the queer artists that came before me like Mykki Blanco and Big Freedia, who were a light for me when I was in High School.

As a new recording artist, what are the biggest challenges you currently face?
I never knew how expensive making music can be! Until you find that perfect deal and have a great team around you, it’s really hard to manage your money and your time, especially while trying to maintain a day job. I’m blessed now to be in a better situation, but in the beginning it was extremely difficult.

You’ve previously said you want to “defy societal norms of the gender binary and sexuality” in your work – have you ever been met with resistance against that within the music industry?
So far, I personally haven’t met that resistance, but that doesn’t mean it doesn’t happen all the time. I’m grateful to be working with people who support my vision and appreciate the story I want to tell, but up until recently, being a successful, openly queer artist was uncharted territory. I’m hoping to change the narrative and bring even more light to queer success stories – we can never have enough. When it comes to challenging the gender binary and sexuality in art, who are role models that you look up to?
I look up to people like Freddie Mercury and Grace Jones who were so unapologetic in their identity throughout their careers. Again, I also look up to Mykki Blanco and even someone like Zebra Katz who championed through the hip-hop genre which is often perceived as especially homophobic.

There is an issue with femme shaming from within the LGBTQ community – primarily amongst gay men – have you had any experience of discrimination from within the community because of the way you present yourself?
I totally have had plenty of femme shaming from the gay community, but I have to acknowledge that I wouldn’t label myself as a gay man at all. I’m non-binary and queer in general – sort of genderless and not exclusively attracted to men. I haven’t experienced this nearly as much with the rest of the LGBTQ community even though it is still there, but I also wouldn’t expect to find security and solace in the singular “gay” community because I really only half-belong. I do think we have a long way to go before femme shaming (rooted in misogyny) is eradicated.

In recent years, the UK has seen some iconic queer spaces shut down because of rising rent costs, and less people from the community socialising in those spaces – is this something that has happened in New York City?
I honestly haven’t seen this happen really in NYC, but to be fair I’ve only lived here for three years. I’m aware that since the early 90’s, a ton of queer spaces have shut down and the parties have all just been moved. While there are many gay bars (especially in Brooklyn) that I hold near to my heart, there is an imbalance because a lot of iconic queer parties are usually held at venues that are otherwise “straight venues” any other night of the week. But the spirit of queer party-goers still appears to be alive and well in NYC as far as I can tell. What do we need to do to ensure queer nightlife remains vibrant, alive, and most importantly safe for the whole of the LGBTQ community?
I think first and foremost, we need to make sure that we are remaining diverse in our line ups. Are we hiring people of color to host? Are we hiring trans DJ’s? Is the entire flyer just men? If we are too lazy to be inclusive, then nightlife becomes shallow, and a place where people are afraid to truly be themselves. Far too often I’ll see a flyer for a “queer” party where every host, DJ, dancer and promoter is a white cis gay man. The queer community is so colorful and rich with unique people from every walk of life, so I urge party planners to make space for everyone.

Finally, what’s next for Merlot?
I’m excited to continue on in the fashion and music world, and to expand the level of opportunities that can be given to queer people of color like myself. I want to break the rules and challenge the system, and most importantly, remain unapologetically and unwaveringly true to myself.