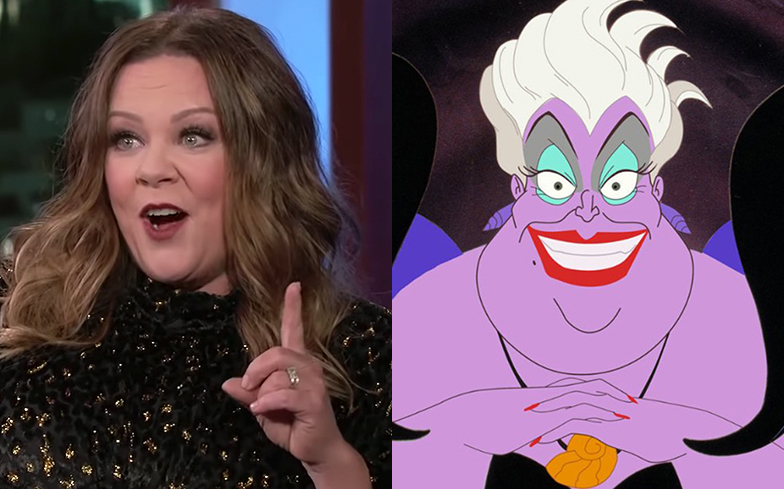 Are we about to see Melissa McCarthy’s take on Ursula?

Ever since Disney announced animated classic The Little Mermaid would be getting the live-action treatment, fans have been desperate to know who would be portraying Ursula, arguably one of the studio’s most popular villains (and a queer icon).

While many have put themselves forward for the role, the one name that keeps popping up is comedian Melissa McCarthy – star of hit movies like Bridesmaids and Spy – especially after Variety claimed she was in “early talks” to appear in the film.

Related: Harry Styles in talks to play Prince Eric in live-action adaptation of The Little Mermaid

During a recent appearance on Jimmy Kimmel Live, Melissa was asked about the rumours, where she joked, “What’s that? Disney? I hadn’t heard about that!” –  although from her mannerisms, we’re assuming she definitely has heard about it.

“It seems like it’d be an awfully fun thing to do. I’d love if Disney gave me a little ringy-dingy,” she said, turning to look directly into the camera, before adding, “We’ll see,” and winking to the camera. “If it did [happen], it would be very wonderful, Disney.”

Explaining why she would play the part, she recalled: “I was a nanny when that first came out and one of the little girls I was watching, we watched it every single night for about a year and a half. So I know it to my core, and I weirdly still love it.”

As it stands, it looks likely that Melissa will be playing the role of Ursula, but plenty of other pop culture icons have put themselves forward, including singer-songwriter Lizzo, Drag Race star Ginger Minj, and musical legend Harvey Fierstein.

Having a drag queen play Ursula would be fitting – the story goes that the original animated Ursula was inspired by American drag icon Divine, purveyor of filth and star of John Waters films like Pink Flamingo and Hairspray.

While this is all speculation for now, we do have confirmation that Halle Bailey – of the R&B duo Chloe x Halle, who opened for Beyonce on her Formation World Tour – will be playing Ariel in the new live-action adaptation.