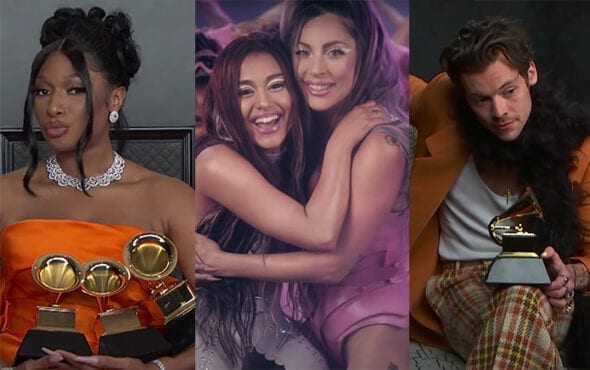 It’s been a hectic night with big wins all around so here’s a break down of a few of our favourite wins from the iconic award ceremony.

Megan Thee Stallion and Beyoncé have made Grammy history with their mega-hit Savage.

The pair took home the award for Best Rap Performance, which made them the first female artists to ever win the category.

The 26-year-old rapper expressed her shock and excitement in her acceptance speech.

“Ya’ll thank you, lord. God is the first person I want thank, oh my gosh. My grandma, thank you nanny for not you know making stop music to finish school,” said Megan.

“Thank you mama for pushing me and knowing that I was going to be here, thank you, Jay White, thank you, Bobby, thank you Beyoncé, like I still can’t even believe this. What? Me? Thank you hotties, thank you Houston!”

“I don’t want to cry but first of all, I wanna say everybody is amazing. Every artist that was nominated for this award is so amazing. So, shout out to all of y’all,” she said accepting the Grammy.

The two-time Grammy winner also dedicated her win to her late mother who passed away in 2019 due to brain tumour.

“I really wanna say thank you to my momma,” the singer added. “She’s not here with me today, but I know she’s here with me in spirit and she always believed I could do it.”

.@theestallion and @Beyonce HAVE OFFICIALLY MADE MUSIC HISTORY! 🌟🏆🎤

The powerhouse artists are officially the FIRST female artists to ever win the category for Best Rap Performance at the @RecordingAcad – thanks to their hit "Savage Remix". Congratulations! #GRAMMYs pic.twitter.com/UCb2rxbiQ0

Beyoncé also made history as tied the record for the most Grammys won by a female artist. In total, Beyoncé has earned a total of 27 Grammys.

Knowles-Carter and Alison Krauss the only women to achieve 27 Grammy awards.

Ariana Grande took to Twitter to share her excitement for the Grammy win, tweeting: “MOTHER MONSTER WAKE UP!!!!!!!!!”

The singer also thanked her fans and the Academy for the award: “Eternally, deeply grateful for you, for this experience, to have been a part of this song and this celebration of healing and recovery, to be able to dance in the rain with u, to call u my dear friend & to no share this. Beyond thankful. congratulations queen ti voglio bene!” she added.

eternally, deeply grateful for u, for this experience, to have been a part of this song and this celebration of healing and recovery, to be able to dance in the rain with u, to call u my dear friend & to now share this. beyond thankful. congratulations queen, ti voglio bene ! 🤍

Last night was also a big moment for British artist Harry Styles. The artist made an entrance with his opening performance of Watermelon Sugar High and later won the Best Pop Solo Performance for the same song.

Styles was also nominated for Best Pop Vocal Album which was won by Dua Lipa for Future Nostalgia.

Here’s a rundown of the winners of the 63rd annual Grammys:

Record of the Year:

Everything I Wanted” – Billie Eilish (winner)

Album of the Year:

Song of the Year:

Everything I Wanted – Billie Eilish

Rain On Me – Lady Gaga with Ariana Grande (winner)

The New Abnormal – The Strokes (winner)

Wonder What She Thinks of Me” – Chloe X Halle

Anything For You – Ledisi (winner)

It Is What It Is – Thundercat (winner)

Highest in the Room – Travis Scott

Stick That In Your Country Song – Eric Church

Who You Thought I Was – Brandy Clark

Your Life Is a Record – Brandy Clark

Related: Megan Thee Stallion and Beyoncé have made HERstory with Grammy win