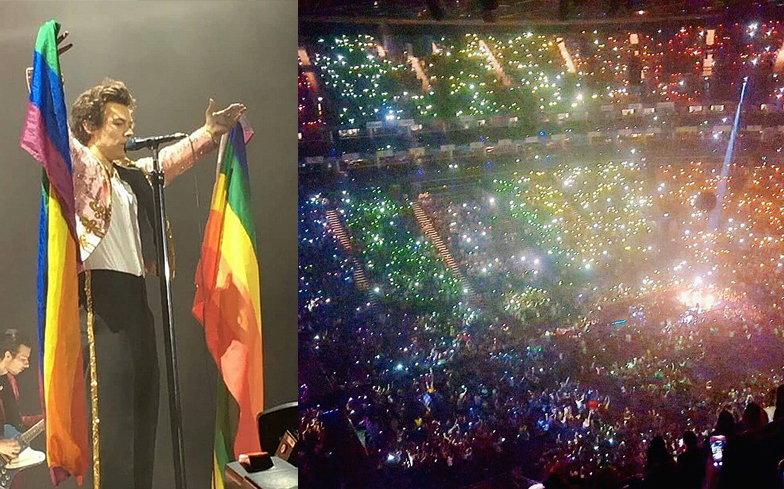 Earlier this month, a group of fans did something truly spectacular during Harry Styles’ two headline shows in London.

The former One Direction star has been a vocal and visible supporter and ally to the LGBTQ community, so during his stripped-down rendition of Sweet Creature at the O2 Arena, the crowd turned themselves into a giant rainbow flag.

It was an ambitious task known as the Rainbow London Project, started by two of Harry’s fans called Ksenia and Luna.

They first launched their bid to turn the 12,000-strong crowd into a Pride flag back in January, posting instructions on social media for fans, and creating thousands of coloured filters the audience could attach to their smartphone flash lights to successfully create the effect.

As you may have seen across Twitter and Instagram, the project was a success and the crowd transformed into a shimmering rainbow spectacle, quite literally highlighting the safe space Harry has created at his shows for LGBTQ youth.

Gay Times had a quick chat with one half of the Rainbow London Project team, Ksenia, to find out more about what it takes to organise such a huge multi-coloured display, and why role models like Harry Styles are important for LGBTQ youth.

How did this idea come about in the first place?
So my friend Luna and I decided to do a project for Harry in October when we found out that we were both going to his London shows this month. I came up with an idea of creating a huge Pride flag. Harry himself was an inspiration for us as he’s a big supporter of the LGBTQ community.

How many coloured filters did you have to distribute to achieve the rainbow effect in the arena?
We made 14,000 colours and instructions for each day, so 28,000 in total. As an organiser I’ve personally done 14,000. For each day we had about 25 volunteers who helped us to distribute the colours. So basically almost everyone got one because there was a high probability that not everyone would hold a colour even if they were given one.

After catching up on life I just wanted to say a massive thank you to every single one of you out there, I am so proud that the project worked out & we couldn't have done it without you.Our fandom is so powerful I love you all ❤ @Harry_Styles @HSHQ #HarryStylesLiveOnTourLondon2 pic.twitter.com/UGLwD1Rw1T

Why did you decide on Sweet Creature as the song to light up the arena to?
We wanted to create a beautiful safe space for everyone, so it’d feel like home. In Sweet Creature he sings “you bring me home” and Harry is the one who brings us, his fans, home.

How have you found the reaction from fans?
We are getting only good feedback from fans! Everyone who attended the shows are so happy that they got to be a part of the project. They are sending us videos and pictures saying thank you for organising it all.

Do you have plans to do more in the future?
Yes, we are planning on doing more projects because this one was so successful. And we actually want to do something for the other One Direction boys. Louis Tomlinson promised us he’d announce his tour dates once his new album is out. I will be more than happy to do something for him too! Not necessarily the Rainbow Project. We are trying to find something that’s important to the 1D boys, and show our support.