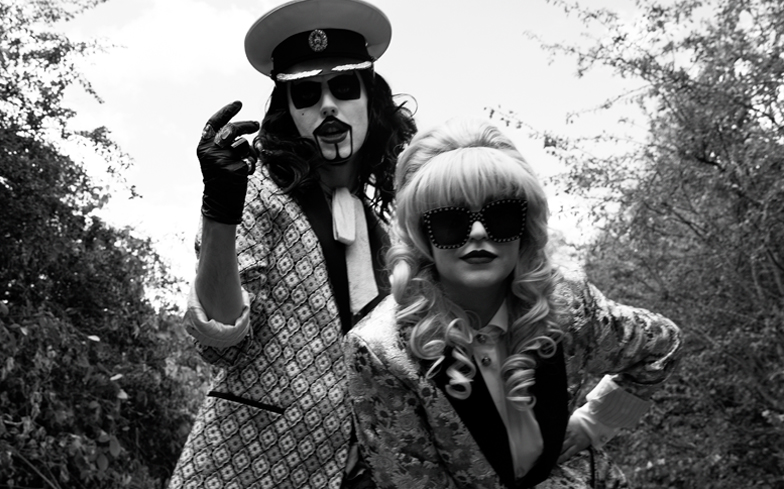 “Certainly many Russian artists are gay, but the majority prefer not to mention it publicly to avoid trouble,” says SADO OPERA’s Katya when we ask her if there is even such thing as a queer music scene in Russia.

The self-described queer performance band first came together in St. Petersburg, gaining attention for their V For Vendetta-style painted faces, and their eclectic stage shows.

But being outspoken against the country’s prevalent homophobia and misogyny meant they found themselves being censored by club promoters.

It wasn’t long until Katya and her bandmate known as Colonel relocated to Berlin, where they continue to play their wild headline shows and raise awareness of the issues that still affect Russian LGBTQ people.

During their trip to the UK this summer to take part in Expression Uncensored, a panel event hosted by Sonos, Index on Censorship and Gay Times, we caught up with the band to talk about the challenges they still face, and how we can all help Russian LGBTQ people who still face persecution in their home country.

What are the biggest challenges for a queer music act in Russia?
Being queer is quite a challenge anyways, not only for music acts. You might have heard of the Russian federal law for the Purpose of Protecting Children from Information Advocating for a Denial of Traditional Family Values. Introduced in 2013, this federal “gay propaganda” law effectively prohibits any positive information about “non-traditional sexual relations” from public discussion and basically prohibits any public demonstration of LGBTQ in a positive context. It means that queer artists are simply not allowed to announce on the radio, TV or even on the street that they are queer and that it’s normal to be queer. To make it shorter: if you raise a pride flag outside in Russia, you may get in trouble with the police.

What was the reaction like to your music when you first started performing?
Because of our music we’ve found a lot of like-minded people and our SADO family was instantly becoming bigger, welcoming new fans and friends. Our songs though seemed uncomfortable to some and thus it revealed another big problem of the Russian society: the self-censorship. We sometimes also had some issues with aggressive individuals who wanted and tried to fight with us during or after our shows. What is the queer music scene like in Russia?
You might imagine that there are no gay clubs in Russia at all, but that’s not true. Of course there are some, especially in the big cities like St.Petersburg and Moscow. There are some queer musicians but there is no real queer music scene in Russia. It’s our dream and plan to help those talented queer artists who happened to be born as Russian citizens to build one. Certainly many Russian artists are gay, but the majority prefer not to mention it publicly to avoid trouble.

How do you manage to promote your music in Russia to fans there?
We keep in touch with our Russian fans on social media quite a lot. And we come to play sometimes as well. Not too often, maybe once or twice a year. It’s way more often that our Russian friends and fans come to Berlin or other cities where we would be touring. We also believe that it’s an important mission to build bridges between our Russian community and our international Berlin community, and so we are also hosting events and are inviting queer Russian acts to play at our Berlin parties.

At what lengths do the Russian authorities go to censor your art because of its queer content?
The Russian system is very different to the European one. There are a lot of unofficial sources involved and it’s a scary game. The danger for the open minded Russian people can come not only from the authorities themselves, but also from so called “religious”, “patriotic” or other kinds of gangs who are collaborating or just supporting the trends introduced by the government. This toxic and stressful environment understandably leads to self-censorship: people are afraid both of the police and of those “fighting-for-morals” hooligans at the same time. Sharing our personal experience we can say that our posters were sometimes censored by pretty open-minded promoters. Our interviews were censored by pretty liberal media, but the most unpleasant thing was when police attacked us on the street just because of our makeup.

What’s the biggest misconception when it comes to Russia and homophobia?
The dominating ‘prison culture’ in Russia makes people perceive homosexuality as a bottom of the hierarchy. For instance, many men would be afraid to shake a gay person’s hand because they will “lose their status” in their fairytale-hierarchic world. This perverted system is fully supported by the government. The biggest misconception is that the ‘gay propaganda law’ is the only trouble. Misogyny is also a very big problem in Russian society, as well as the violence against women and girls. There’s even a law that recently decriminalised domestic violence… so there is a lot to talk about and a lot to fight for.

Why do you think music is such a powerful tool to use as a form of activism?
In the Soviet times, during the “Iron Curtain” era, for example, Soviet people could secretly listen to many forbidden Western bands. And despite the general isolation, this often was the only connection with the rest of the world for them. We doubt that only this tool led to the fall of USSR, but definitely the more tools, the better. Music (and art in general) seems like a universal way of communication and that is a superpower. How do you help LGBTQ citizens in Russia now that you are based in Berlin?
We support queer artists from Russia by helping them to get gigs in Berlin clubs and festivals. Our residential club Wilde Renate helps us a lot in this direction and we deeply appreciate all their help and support on that. We also sometimes do charity events with the help of Wilde Renate and our other Berlin colleagues to raise money for the Russian LGBT Network – an interregional, non-governmental human rights organisation that promotes equal rights and respect for human dignity, regardless of sexual orientation and gender identity. They started working in 2006 and develop regional initiatives, advocacy groups (at both national and international levels), and provide social and legal services. Needless to say, this is a very important and brave organisation. If people are wondering how they can possibly help, the Russian LGBT Network allows people to make a donation online.

Do you think the international community should be doing more to help protect LGBTQ citizens in countries where being LGBTQ is tough, or in some cases, illegal?
The only thing we can do in these circumstances is to create our own little world using social networks and general networking involving people from all around the world to make sure that more like-minded people are in touch with each other. We believe that it is extremely important to let queer people in Russia or similar political regime countries know that they are not just part of some isolated country, but they are members of the international queer family.

What would you say to people in the UK who feel like they can’t help change LGBTQ persecution in foreign countries? In what way could they join the global fight for equality?
There were many moments in human history when people couldn’t help change some unfair laws, but they could – and did – help those who were persecuted. In the case of Russia, UK people can help at least by supporting the Russian LGBT Network organisation and make it possible for more Russian queer people to have access to legal support and protection.

What’s next for SADO OPERA?
This autumn we are releasing a track called In The Dark which is an erotic odyssey conceived as a tribute to one of our favourite hangouts in our home base of Berlin, Ficken3000, which celebrated turning 20 this year. Other fans of the infamous sex club include voyeuristic Hollywood celebs and Parisian design collective Vetements, who recently ran a line of t-shirts stamped with the club’s logo and motto, Share the Blame. And blame for In the Dark can be shared with Damien Vandesande of dOP (Circus Company) and Les Fils du Calvaire (Because Music). We wrote and produced the track together using five different analog synthesizers. Strutting the line between hi-NRG and acid house, the song is based on a true story that happened in the basement darkroom of Ficken3000 with an anonymous man who had a rough beard, strong hips and a wife who is either very open-minded or totally oblivious.