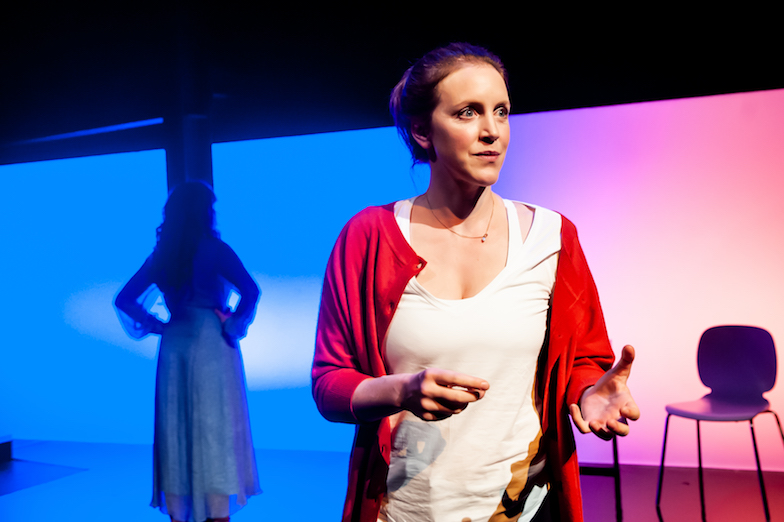 Meet Me At Dawn is a slight play, lasting scarcely more than an hour. Don’t let the brief running time fool you, however – what it achieves in that short run time is impressive, and the presentation is compelling throughout. This one-act two-hander focuses on Helen (Jessica Hardwick) and Robyn (Marianne Oldham), a young couple who have washed ashore following a boating accident. After the initial thrill of survival they realise that they’re lost and try to figure out what to do next.

Over the course of the play we gradually learn that what we are watching is not a realtime, real-life encounter, but actually some sort of dream sequence or hallucination. It becomes evident that one of them has died and the other is going through the various stages of grief, trying to make sense of and cope with the loss. We’re gradually given snapshots of the events on the day of the accident, building a picture in our minds of what really happened, whereas what we witness is an alternative reality in the imagination of the survivor.

The production is simple but effective. In terms of the staging, the highly reflective flooring coupled with a brightly lit panel at the back of the stage enables some neat lighting effects. There are only a handful of props on this almost completely bare stage, but that draws more focus to the ones utilised. The sound design is again sparse but works well in the context, while the use of reverb on the actors’ voices lends certain monologues a dreamlike quality.

It’s all held together by strong performances from the two actors. Both are compelling and they work well together – we really bought into them as a couple. The petty arguments they were having over complete trivialities, the affectionate way they described each other’s foibles, the rhythm that their conversations would fall into – it all felt very natural and believable. They were also able to inject just enough humour into their roles to ensure the tone of the play didn’t remain relentlessly bleak.

Meet Me At Dawn presents a smart exploration of loss and grief. We’re aware the subject matter won’t hold universal appeal – it’s far from the foundation of a fun lighthearted night out – but it’s an intelligent play which achieves a lot in a very short space of time, while also showcasing a pair of impressive acting performances. Well worth investigating.